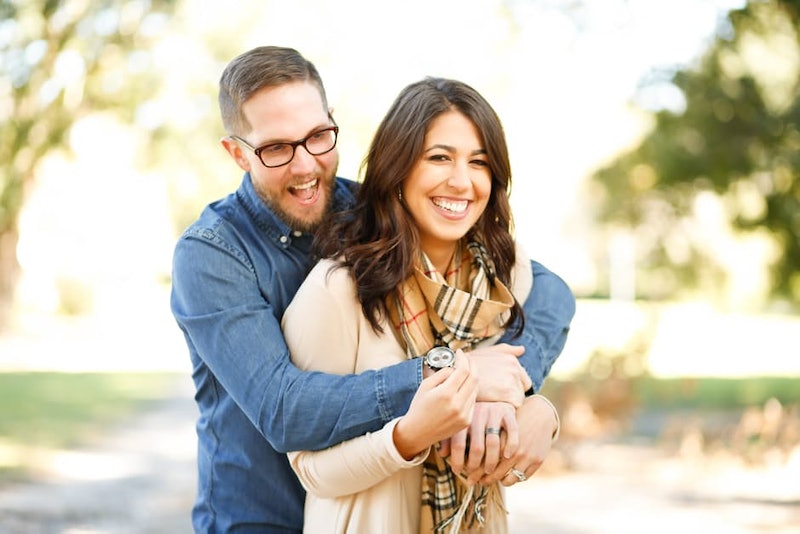 If you ever find yourself checking someone out in front of your partner, it turns out there may be a very good reason why. Although, that doesn't make it any easier. It's the most awkward thing in the world when you're with someone you're genuinely in love with, walking around, and you see your eyes wandering. And when your partner does it while out with you, it can be downright hurtful. But the folks at Medical Daily looked into it— and it it turns out there may be some science behind the wandering eye effect.

Firstly, it's not always about actually being attracted to someone. Sometimes, it's just our brains running through the motion of sizing someone up. "Attraction is largely subconscious. We check people out because we are attracted to them and 'sizing them up,'’ David Bennett, a relationship expert, told Medical Daily. "This doesn't necessarily mean anything more than that we find the person attractive." I know that doesn't necessarily make it any better, but at least if it's in your subconscious then you can rest assured that it's not something your partner is actively doing — it's more like something that we're wired to do. Like I said, it's still weird.

But the other possilbity is that there's some evolution involved. "Evolutionary psychology informs us that females, [who are also influenced] by their limbic 'primitive mind' brain stem, are hardwired to check out a potential partner's resources [money, strength] to ensure he can protect her and her offspring,” Dr. Nancy Irwin, a therapist and clinical hypnotist in Los Angeles, explained in Medical Daily. So it could be that you're just hardwired to be on the hunt for mates, even when you're with someone. Sure, we normally control those urges— but the occasional look escapes us.

What Does It Mean For Your Relationship?

The big question is — does a wandering eye make a difference in your relationship? There's a lot of research and opinions vary, but from what I can tell, the occasional glance just isn't a big deal. For instance, in a 2009 study, published in the Journal of Experimental Psychology, men acknowledged the fact that they were looking at other women, but said they had no attachment to those women. And interestingly, another study found that people in highly satisfactory relationships saw attractive people as less attractive than they actually are — suggesting that if your partner is very happy, then a wandering eye really isn't a bit concern.

"But I think it's important to strongly distinguish between looking and staring; this ... is the basis of a very long argument with many couples,” Michele Barton, a clinical health psychologist at Psychology Life Well in Harrison, NY told Medical Daily. Obviously if it bothers you or goes over the bounds of being respectful to you and whoever they're looking at, that's not OK.

So there's a lot of a wandering eye that can be totally normal and isn't anything to worry about — just because you're in a relationship doesn't mean other people stop being attractive and your brain is going to act on its impulses once in a while. As long as it's not over a line and making anyone uncomfortable, it shouldn't rock the boat.

More like this
31 Ways To Celebrate Valentine's Day With Your Long-Distance Love
By Natalia Lusinski and Carolyn Steber
5 Signs You Have A Toxic Relationship With Yourself
By Lexi Inks
My Partner Wants Me To Wear A Diaper During Sex. Help!
By Sophia Benoit
The 3 Zodiac Signs Most Likely To Get Married Later In Life
By Kristine Fellizar
Get Even More From Bustle — Sign Up For The Newsletter
From hair trends to relationship advice, our daily newsletter has everything you need to sound like a person who’s on TikTok, even if you aren’t.