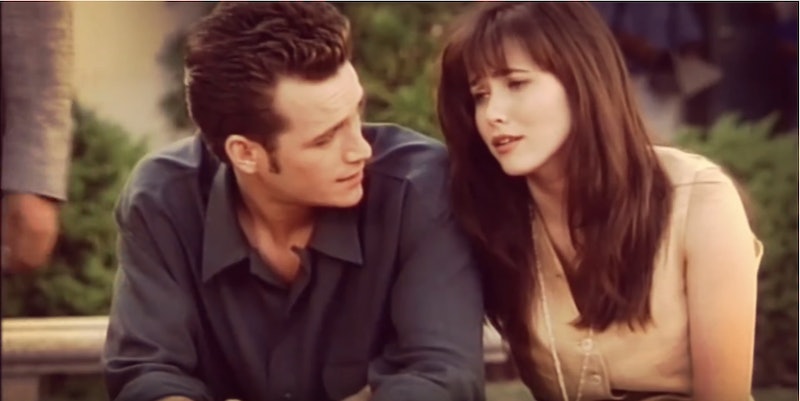 Confession time: Luke Perry, who passed away earlier this week, was my first celebrity crush. Yes, I was only a year old when Beverly Hills, 90210 premiered in 1990, but by the time I was four or five years old, I had become a massive fan. My mom (for reasons unknown) thought it was totally fine that I sat down to watch the show with her every week — probably because I was already enamored with Perry, thanks to the 1992 Buffy the Vampire Slayer film in which he starred. I'm also certain she figured that I, a very small child, would have no idea what was actually going on in the halls of Beverly Hills High.

Whatever the case, I owned all the 90210 merchandise you can imagine: bedsheets with the Peach Pit logo, a nightgown featuring all four of the cast's male stars, a full set of dolls, and of course, a poster of Jason Priestley (all the Luke Perry posters were sold out.) It's only as an adult, though, that I can acknowledge how formative an experience it was to have my age-inappropriate crush on Perry as 90210's resident bad boy with a heart of gold, Dylan McKay. I've tended to root for the gorgeous screw-up in most of my favorite media ever since (think Jess Mariano on Gilmore Girls) and Dylan and Brenda were probably the first couple I ever shipped.

Perry and Shannen Doherty became household names because of the show, of course, but their portrayal of Dylan and Brenda's relationship has remained one of their biggest contributions to pop culture. The star-crossed duo seemed fated from the start, and viewers watched from the edge of their seats as they romantically, dramatically got together — and then fell apart. And while there are some fans out there who ship Dylan and Kelly, I will always be a mega fan of the show's OG high school sweethearts.

And if you also love high school-set stories about the sweet, misunderstood bad boy falling in love with the awesome yet sheltered heroine, well, you're definitely going to want to read the 11 books below: