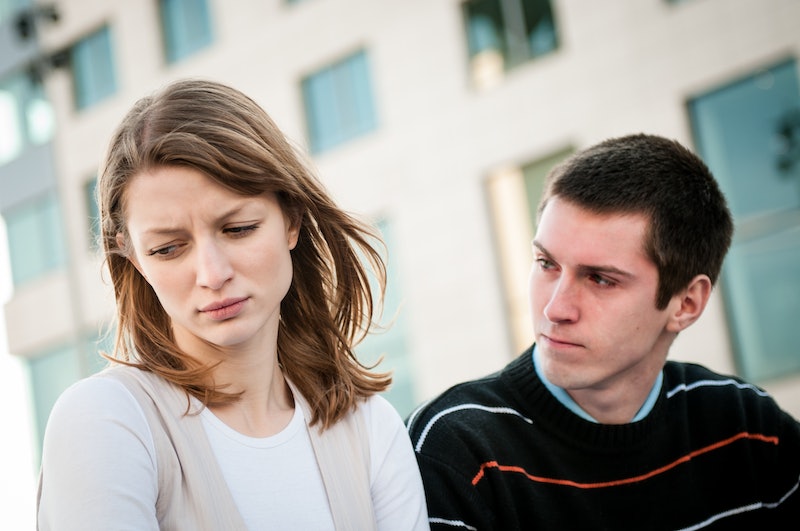 People can say things they don't mean when they're angry, hurt, or stressed. Sometimes you can be understanding and just let it slide. But if you're in the middle of a fight and your partner says something hurtful like, "I don't love you," that's not something you can easily shake off. Chances are, their words will linger in the back of your mind long after they've appologized. So what does it actually mean if your partner says they don't love you when they're angry?

"This is something that comes up quite often," Linda Stiles, LSCSW, a counselor who specializes in marriage and relationships, tells Bustle. "People do say things they don't mean when they're triggered, emotional, or upset. While it's not something to write off, it's likely that the hurtful words are not just what they seem."

For instance, when one partner says hurtful things in the heat of the moment, they may be trying to get the other to understand their feelings. They could be feeling hurt, sad, lonely, or powerless. While it's really not a good reason to say mean things, that's just their way of expressing themselves.

According to Stiles, think of it like a child saying "I hate you" to their parents. "The child doesn't really mean that; it's just a way of expressing strong emotions in the moment," she says. "Sometimes this reflects behavior and emotional coping patterns that were modeled in our family of origin. But there are many other factors to consider."

So here are some other things it could mean if your partner says they don't love you when they're angry, according to experts.

More like this
How To Politely Reject Someone Who Keeps Asking You Out
By Laken Howard and Lexi Inks
Are Quality Time & Gift-Receiving Love Languages Compatible?
By Lexi Inks
20 Women Reveal Exactly How Long It Took Them To Get Over Their Ex
By Amanda Chatel and Lexi Inks
10 Creative Sexting Ideas That Don't Involve Nudes
By Lexi Inks
Get Even More From Bustle — Sign Up For The Newsletter