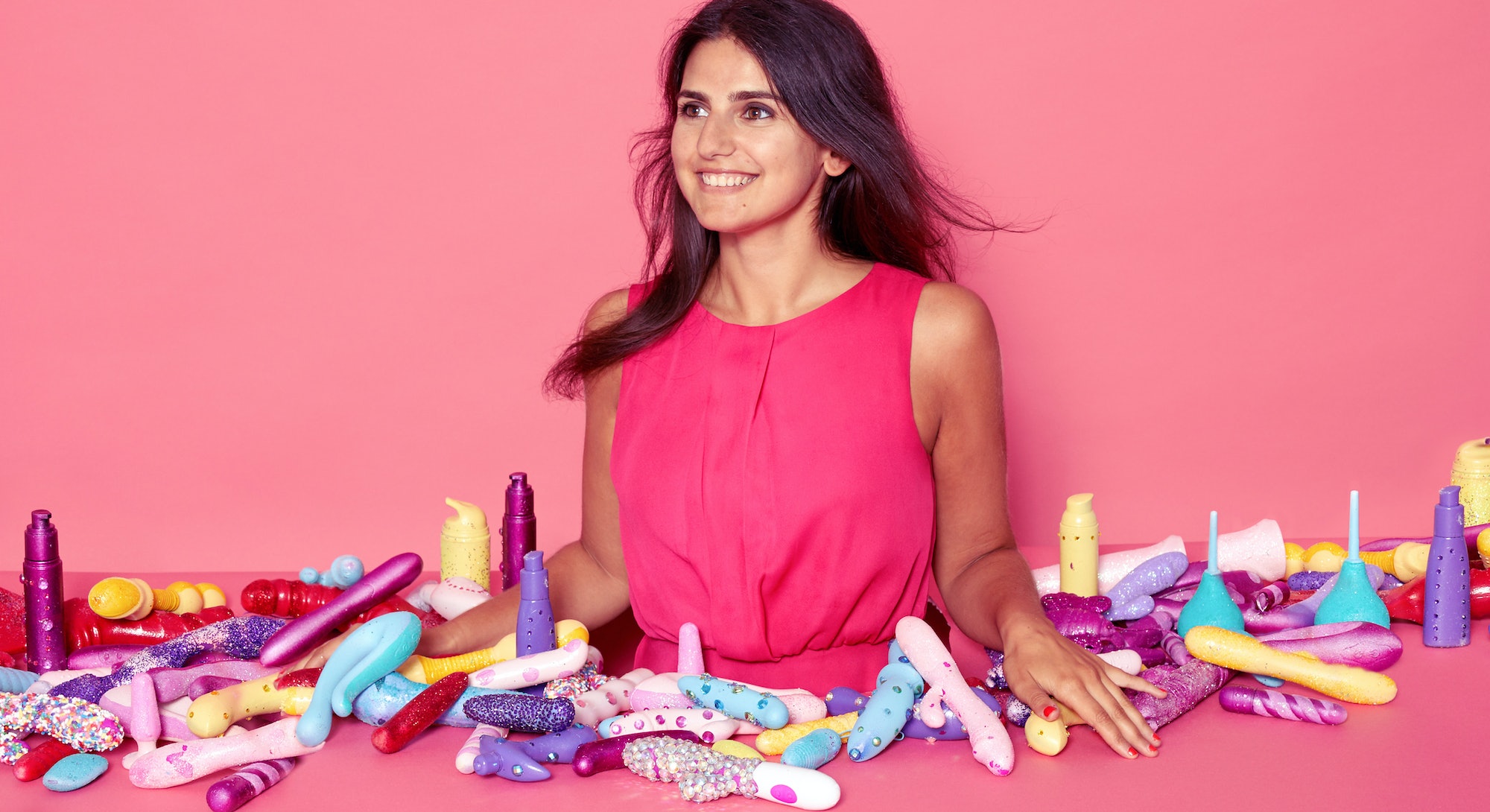 I am surrounded by sex toys. Not just figuratively, as someone who covers them for work, but also literally. There are toys to my left, right, in four huge boxes next to my desk, and in my filing drawers. Oh, and there's also one in my vase because I'm running out of room here. Four years ago, before I became a sex and relationships editor, I never would have guessed I'd be fenced in by sex toys — at that point I'd never even touched one before.

I wasn't ever opposed to them back then, but they weren't really on my radar. My friends never spoke about sex toys, even though we talked about sex all the time. And aside from seeing them on Broad City or Sex and the City, I really had no points of reference. (I later learned how hard it is for sexual wellness companies to have any sort of presence on social media due to strict, sex-negative policies.)

I was also slightly intimidated — especially by the plastic, phallic ones or the large massagers that looked like power tools I didn't want anywhere near my bed. Until I started researching, I didn't realize how many innovative products there are, and how you can find ones that can completely fit your body, desires, and aesthetic — and even your taste in jewelry.

I also ignorantly thought I didn't "need" them. I was able to get off fine solo, and what I thought was often enough during sex. I had no idea how much toys would end up teaching me about my body, or that the sensations they'd provide would be unlike anything I'd experienced before. I also later learned how beneficial they'd be with a partner. Previously, whenever I didn't orgasm with a partner, I figured it was because I couldn't focus, not because I needed more stimulation, as most women do. "Vibrators kind of level the playing field for women in the bedroom," Claire Cavanah, co-founder of Babeland, tells Bustle. "A lot of women really need the consistent stimulation on their clitoris to have the same experience as men have."

They've helped me feel more comfortable and confident in the bedroom, and with my body. But I do realize how overwhelming walking into a store can be for beginners. And, even though 81 percent of women have brought a sex toy into the bedroom, according to The Journal of Sexual Medicine, there's still a stigma attached.

So in an effort to bring more awareness to the awesome options that are out there now, I tried out 13 inventive solo and couples toys on the market to see what's really worth the hype. Here's what I, and in some cases my boyfriend, thought about each in five words — because short really is sweet, and also we don't have the right emojis for this kind of thing yet.

Nope. Boyfriend: Are you OK?

An actual gift from above.

Unlike lipstick, will use frequently.

How it works: This clitoral stimulator in disguise is an on-the-go version of the popular Womanizer, using pleasure air-technology just like the original. Instead of vibrations, the toy stimulates via pulsating pressure waves without actually touching your clitoris.

Mission(ary) accomplished! We both enjoyed.

How it works: Like The Womanizer, this toy offers touch-free clitoral stimulation in 11 different settings through waves of air-pressure that are meant to mimic the sensations of oral sex. Unlike the OG version, this update has a whisper mode and a longer handle meant for better control.

How it works: A dual stimulator, Nova offers G-spot stimulation and clitoral vibration simultaneously. You can change the intensity on either motor or turn one off completely. The toy has 10 different settings and the option to customize your own via its app.

Easy, effortless, and cute too.

How it works: This handheld oral sex simulator offers clitoral sensations through 10 pleasure settings and a rotating, vibrating nub that's meant to mimic a moving tongue.

How it works: This vibrating ring, which rests at the base of the penis, is meant to be used to offer pleasure for both partners during sex (aka longer lasting erections and clitoral stimulation). The toy has 10 vibration modes, and if you connect to its app, you can control the ring from anywhere. Personally, I loved the vibrations Pivot was giving off, but it wasn't exactly wide enough for my boyfriend and he didn't find it enjoyable. However, he's willing to try it again.

As you can see, finding the right toy for you depends on your body and your needs. While they weren't my favorites, We-Vibe Rave and Queen Bee could be total game-changers for those who want powerful vibrations. And if you're using a couples toy, you'll absolutely need to take your partner's body and needs into consideration too. Sync didn't feel right for me during sex, but my boyfriend didn't mind it. And while I was ready to call Pivot my new BFF, he couldn't wait to take it off.

That being said, sex toys are constantly becoming smarter and more customized, so setting your own pattern, speed, and even shape is now very much a possibility with a lot of toys. Don't be afraid to get out there and explore — your body and your sex life will thank you.