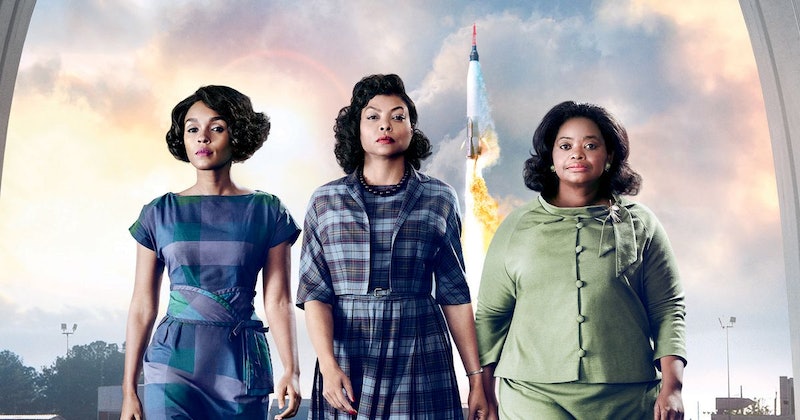 As a female outer space geek who's obsessed with things like Star Trek, NASA history, and intelligent sci-fi, I've been absolutely loving this fall-winter movie season. Not only have a number of space-focused films premiered in recent months, but the fact that many of them feature women at the front and center of their stories is inspiring. And making their inclusion even better is the fact that, within three of the big space-based movies starring women this season, Arrival, Rogue One, and Hidden Figures, all of the women have a different relationship and approach to outer space.

Science-based cinema is getting better and better about including women. We have great past examples like Ripley in the Alien franchise or Ellie Arroway in Contact. But this year, there has been a plethora of female lead characters in space-based movies, all of whom are different in some way. You've got Amy Adams deciphering alien languages in Arrival, three ladies working the math to get the first space travelers to the stars in Hidden Figures, and Felicity Jones fighting battles in interstellar ships in Rogue One. It seems it's never been a better time for women in sci-fi (and sci-true when it comes to Hidden Figures), which is pretty exciting.

Just take a look at Arrival. Based on the short story Story of Your Life, by Ted Chiang, the movie finds Adams' character, Dr. Louise Banks, an expert linguist, tasked with trying to find a way to communicate with the enormous, tentacled, alien creatures inside 12 mysterious pods that have appeared on Earth. The aliens "speak" to their human counterparts from a cloudy environment behind a glass wall, and within each encounter, there's heavy suggestion of the differences between how women approach communication versus how men do. The fact that it's Arrival's sole woman who's the one advocating for intense, lengthy, complicated communication with the aliens as opposed to the heavy-handed actions suggested by her male counterparts is an interestingly direct element of the film. And by using language and the written word to prevent catastrophe, Louise's approach results in a much different outcome than your usual alien invasion movies.

On the opposite end of the spectrum, women are also being shown as capable of taking action when words fail. In Rogue One: A Star Wars Story, Felicity Jones takes the lead as Jyn Erso, a rebel fighter tasked with stealing the plans to the Empire's Death Star. As the second woman to lead a Star Wars film as its main protagonist, Jyn certainly has a lot to live up to. But much like Rey, Jyn proves she has the physical strength, bold wherewithal, and bravery to shoot blasters, fight stormtroopers, and infiltrate enemy territory just as any soldier of war can. Her position in outer space, and the universe of story line that surrounds her, puts Jyn in quite a different position than Louise, that's for sure. No amount of talking is going to get Jyn her freedom from the Empire. But that both women exist in these highly-fantastical sci-fi worlds and lead their movies is a phenomenal fact.

Hidden Figures, meanwhile, which hits theaters on Dec. 25, brings space exploration back to the realm of reality here on Earth. It tells the story of three brilliant African-American women who worked at NASA during the famous space race of the 1960s; Taraji P. Henson plays Katherine G. Johnson, Octavia Spencer is Dorothy Vaughan, and Janelle Monáe takes on Mary Jackson. They were all amazing mathematicians, but it was Johnson who helped calculate John Glenn’s trajectory around the Earth before he became the first American to orbit the planet. Theirs is a forgotten story, and while their challenge is, much like Louise's in Arrival, one that requires intelligence to solve, their skills are rooted in mathematics, while Louise's linguistic prowess definitely utilizes emotional elements.

The ladies of Hidden Figures also bring an element of grounding to this season's women-in-science trend. While Arrival and Rogue One explore the stars in fantastical fictional scenarios, it's always amazing to me to remember that humans have actually made it to outer space, and that the women profiled in Hidden Figures helped put us there.

It's been a blast watching these women rule outer space this movie season. I only hope that this "trend" of female characters in sci-fi, science history, and outer space-based movies continues and that cinema continues to bring us a variety of women heading off into the stars.