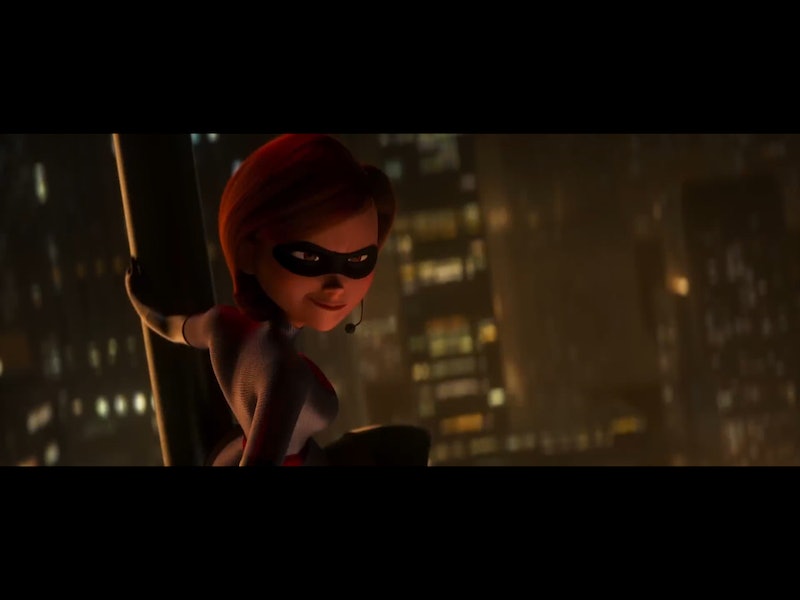 Hitting theaters June 15, The Incredibles 2 is bound to dominate the box office. It's been roughly 14 years since the world was first introduced Mr. Incredible, Elastigirl and their children Violet, Dash and Jack-Jack. Even with the sequel's story picking up right where it left off, The Incredibles 2 premise has a sense of female empowerment couldn't be more timely.

Writer and director Brad Bird cited the 2004 film as one of his most joyous filmmaking experiences, so exploring the ins and outs of the Incredible family dynamic was something he knew he would return to. Showcasing his love for the film even further, while speaking with Variety, Bird broke down how all of the Incredible's family members were created with intent. He explained,

"I chose the powers around the roles that the characters had in the family. Fathers are always expected to be strong so I made him super strong. Mothers are pulled in 10 different directions at once so I had her stretch. Teenagers are insecure and defensive so I made her have forcefields and invisibility. Ten year olds are energy balls and babies are unknown, so maybe he has no powers, maybe he has all the powers. That works if they’re the ages that they are."

Unlike its first installment, The Incredibles 2 tasks Elastigirl, the wife of Mr. Incredible, with saving the day, all the while Mr. Incredible is stationed at home to take care of the children. A dad playing Mr. Mom while the wife leaves the nest to provide for the family seems pretty progressive, right? Well, according to Bird, however, The Incredibles has always been ahead of the curve.

Bird worked on the current film over the past four years, but when it came to developing the plot for the second installment, the film's producer Nicole Paradis Grindle confirms that its feminist premise has been years in the making. Also while discussing the film with Variety, she said, "Brad had the idea that he wanted Helen (Elastigirl) to be the one to get the mission 14 years ago."

"It turned out that it was a very timely issue, but I like to say that this is not a message film at all, this is just the way people live," she continued, saying, and honestly, that couldn't have been more true. In a time when conversations about representation are more prevelant than ever, showing the diversification of familial roles is definitely fitting. Though not entirely out of the ordinary, seeing a father — especially one as domineering as Mr. Incredible — taking on more of a domestic role will definitely serve as a comedic relief for some, but will also, hopefully, contribute to larger conversations surrounding familial structures and their many forms.

Holly Hunter, who voices Helen, aka Elastigirl, hopes that The Incredibles sequel will also normalize conversations about equality. She told Variety, "There are giant responsibilities in raising children, and it’s a responsibility that’s wonderful if it gets to be shared by two people, whether it’s two men, two women, a male and a female." And when it comes to deciding just who fulfills which role, Hunter said, "Who cares."

Even though short and sweet, Hunter's response couldn't have been more on point. The responsibilities of family life should be divied up amongst its members, and gender shouldn't play a determining factor in who takes on whichever task. In this way, The Incredibles 2 is adding some much needed perspective to conversations surrounding family dynamics and female empowerment. But, though extremely revelant and important to discuss today, true progressiveness will be measured once conversations about strong female leads and diverse familial structures are no longer needed.