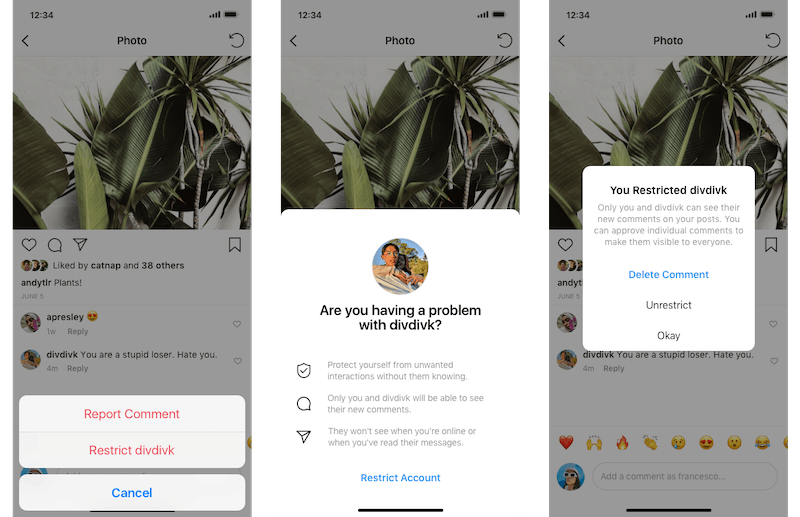 It’s no secret that online bullying and harassment has become a full-on epidemic — and now one social media platform is finally rolling out a new safety feature aimed at curbing abusive behavior online. Instagram will begin testing a “Restrict” feature that will allow you to hide comments from bullying or abusive users left on your posts, but without actually blocking the bullies or abusers outright. The feature will keep the nastiness from these users off your profile while still allowing you to monitor their behavior — and it will do it without notifying the bullies that you’ve Restricted them in the first place.

Instagram announced the new feature, which will initially roll out as a test, in a blog post from Head of Instagram Adam Mosseri published on Monday. According to the post, the feature is a direct response to younger users of the social media platform who say they’re “reluctant to block, unfollow, or report their bully because it could escalate the situation, especially if they interact with their bully in real life.” And, indeed, it’s no secret that cyberbullying remains a rampant — and growing — problem in our increasingly plugged-in world.

According to a 2018 survey from the Pew Research Center, for example, a whopping 59% of American teens reported having experienced at least some form of cyberbullying; the most prevalent form was name-calling, with 42% of those who had experienced cyberbullying saying they’d been “called offensive names online or via their cellphone,” although five other forms of cyberbullying also appeared in the report with regularity, ranging from receiving unsolicited explicit images or having explicit images of them shared without their own consent to being the subject of false rumors being spread about them.

Meanwhile, in the UK, the 2017 edition of British anti-bullying charity Ditch the Label’s Annual Bullying Survey — which the organization terms the “largest benchmark of bullying behaviors in the United Kingdom” — found that when it comes to cyberbullying on social media platforms in particular, 42% of teens said they had experienced cyberbullying specifically on Instagram. (It was far from the only platform on which cyberbullying reportedly occurred, of course; at 37%, Facebook was a close second, with Snapchat not far behind at 31%).

That’s where the upcoming Restrict feature comes into play. Restrict won’t stop someone from engaging in bullying or abusive behavior on Instagram — but it will prevent that behavior from being visible to all your other followers. Here’s how it works: When you tap “Restrict [user]” in response to an abusive comment left on one of your posts, you’ll first see a dialogue window that asks you if you’re “having a problem” with the user in question. It then informs you that you can “protect yourself from unwanted interactions without them knowing,” that “only you and [the user] will be able to see their new comments,” and that “they won’t see when you’re online or when you’ve read their messages,” and gives you the option to Restrict that user’s account. Once you Restrict them, you’ll be able to go through their comments individually and choose to delete them or Unrestrict them and make them visible to everyone else.

Similar to the “mute” feature on Twitter, whoever you Restrict won’t necessarily know you’ve Restricted them. Unlike outright blocking someone, people you’ve either muted or Restricted won’t be notified of the fact — which, in turn, might prevent a harassment campaign being levied at you from escalating (although it's worth noting that muted and Restricted users on both platforms can still see your page and whatever you post, whereas if they're blocked, they can't). The idea is that someone who might get even more rageful and abusive upon being blocked — that is, upon having their avenue of unleashing said rage and abuse on their target — will be less likely to ratchet up to that level if they don’t know they’ve been muted or Restricted in the first place. Or, as Instagram put it in their blog post, “We wanted to create a feature that allows people to control their Instagram experience, without notifying someone who may be targeting them.”

There’s still a key difference between muting someone on Twitter and Restricting them on Instagram, though. With Twitter, even if you can’t see tweets aimed at you by someone you’ve muted, others can still see those tweets. With Instagram’s Restrict feature, though, it’s sort of the opposite: When you Restrict someone, only you and that person will see the comments they’ve left on your posts. No one else on Instagram will see them unless you’ve approved the comments in question yourself.

There are pros and cons to both setups: Muting someone on Twitter frees you up from having to waste time or brainspace on abusive language being hurled at you by someone else, but it also means you can’t keep an eye on whether they start escalating their abuse — say, if they move from calling you names to physically threatening or doxing you. Restricting someone on Instagram, meanwhile, means you’ll still see what any bullies abusers are saying to, at, or about you — which is its own special kind of terrible — but you can at least keep track of what they’re saying and doing. This, in turn, will enable you to know if or when it might be necessary take further action to keep yourself safe.

Anyone being targeted online shouldn’t have to do this, of course, and it’s unacceptable that we live in a world where this kind of personal monitoring and defensive action is so frequently necessary — but here we are.

And although Instagram developed the Restrict feature with younger users in mind, it’s not just teens who are dealing with abusive behavior online. Pew Research Center found in 2017 that four in 10 American adults have experienced online harassment; additionally, some groups were more subject to specific kinds of harassment than others: Women were far and away more likely to experience sexualized forms of abuse online, for example, while people of color were much more likely to experience trait-based harassment due to race or ethnicity. And we only need to look to countless recent news stories to see how online harassment is never “just” online harassment: People have been doxed, SWATTED, and had to go into hiding as a result of sustained campaigns of harassment.

Instagram’s Restrict feature obviously won’t prevent any of that from happening — but it’s long past time that social media companies began dealing with the bullying and abuse that happens on their platforms, so the Restrict feature is a start.

As is often the case with new Instagram features, there’s a lot we don’t know about when Restrict might be made widely available — if at all. According to Mosseri’s blog post, Restrict will begin as a test, likely only for select users, which is scheduled to arrive “soon.” We don’t know who will have access to the test, when the test will begin, or, if the test is successful, when the feature might get rolled out to the rest of Instagram’s one billion monthly active users. But if it’s successful, we can probably expect to see it getting some kind of expansion in the not-too-distant future.

For more on Instagram’s latest anti-bullying features, head over to the Instagram blog.