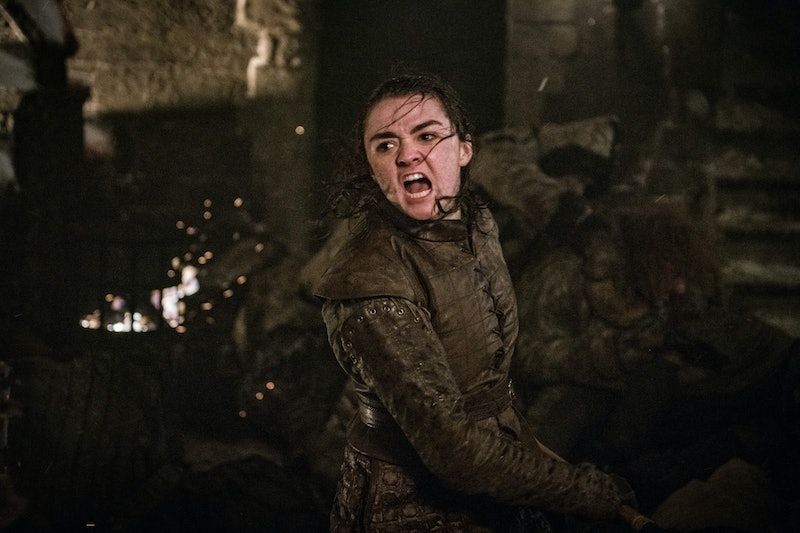 Spoilers ahead for Game Of Thrones Season 8 Episode 3. The Night King came, he saw, but he didn't conquer Winterfell. While his Army of the Dead did cause a lot of damage during Game Of Thrones' biggest battle, in the end Arya killed the Night King with a little help from Melisandre. And the fact that this particular member of the Stark family was the one to defeat the Night King could open up the possibility that Arya is the Prince That Was Promised?

In this Game Of Thrones episode, Azor Ahai's name was never spoken, but Arya seemed to fulfill the Azor Ahai prophecy that Melisandre laid out. The Red Priestess had said time and time again that Azor Ahai, the Prince (or Princess) that was Promised would save Westeros from the eternal night. Episode 3's title was "The Long Night," another name for the event in which the Night King would lead his White Walkers to war, a clue that Azor Ahai was bound to be revealed in this episode.

Melisandre's prophecy also stated that he (or she) will come again to defend the world from the coming darkness, which Arya certainly did by stabbing the Night King with a Valyrian steel dagger, right as he was getting ready to kill Bran, aka The Three-Eyed Raven, the one with all the information.

Another sign that Arya fulfilled this prophecy of the second coming of this ancient savior is what Melisandre did next. After the battle was won, she stripped off her necklace and her clothes and died in the snow in the final shot of the episode, just as she's always said she would.

However, as many fans pointed out, Arya doesn't exactly fit the description Melisandre gave for Azor Ahai. Specifically, her saying this promised being's resurrection would involve a burning sword called Lightbringer, a birth from "smoke and stone" underneath a fallen star, and waking dragons from stone.

Now, this certainly isn't Arya, who killed the Night King with a small dagger and was born of Ned and Catelyn Stark — and, as far as we know, cannot ride a dragon. But, Melisandre did tell Arya that she would “[kill] Brown eyes, blue eyes, green eyes. Eyes sealed shut forever.” And Arya has been training for this exact of moment as long as Game of Thrones has existed, even repeating her teacher Syrio Forel's favorite catchphrase, “not today,” when Melisandre asked her, "What do we say to the god of Death?"

But, the fact that Game Of Thrones has focused so heavily on Melisandre's words is why a fan on Twitter predicted that Arya isn't Azor Ahai, and that the Night King isn't really dead. In fact, they predict, that there's another Night King that could be resurrected by the real villain of GoT, Cersei Lannister, which could lead to the real Azor Ahai standing up.

However, critic Roxana Hadadi offered another, perhaps less exciting, explanation for the Azor Ahai prophecy: it was never really meant to be fulfilled because it was never really true. It was never fact, but a belief that Melisandre deeply held based on her belief in the Lord of Light.

"Melisandre dropping her glamour and dusting away. ending the episode on her — centuries? spent on her quest? to see the end of night. there was no prince that was promised," Hadadi tweeted. "Just a girl. A girl named Arya Stark."

It's possible that Arya isn't Azor Ahai, and that neither is anyone else. Just as she told Jaqen H'ghar in Season 6, "A girl is Arya Stark of Winterfell," and she came back with everything she had learned to protect her home from anything that could destroy it.

Could the Night King return? Could the identity of the real Azor Ahai have yet to be revealed? Sure, it's definitely possible. But on this very long night, it was Arya who was able to end the Night King's reign of terror. Arya may be just a girl, but as she's shown time and time again, that's always been more than enough.