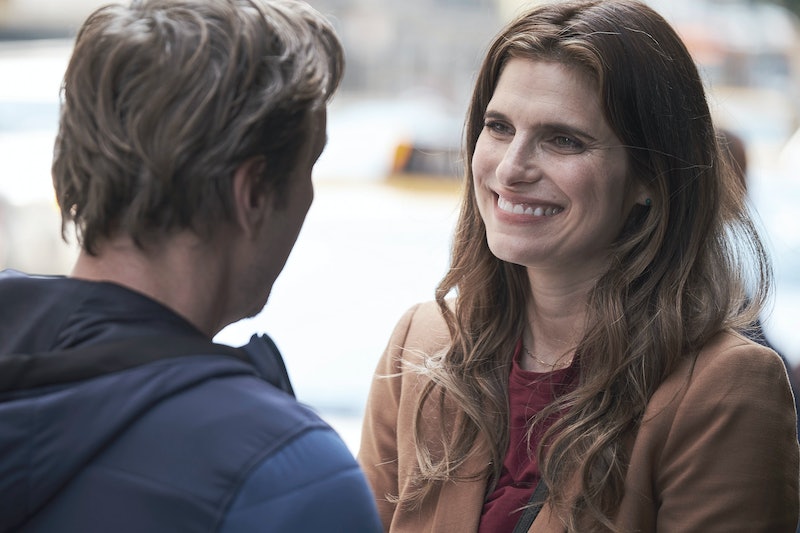 Lake Bell and Liz Meriwether's new show, Bless This Mess follows a newlywed couple played by Bell and Parenthood's Dax Shepard. They move to Nebraska from New York City in search of a simpler, more peaceful life, and in true sitcom form, things go off the rails. It's an ordinary enough premise that it could very easily be based on a true story, though it doesn't appear that it is. Still, early reviews have praised the series for putting a fresh spin on a classic fish-out-of-water tale.

"Like Meriwether’s biggest hit, New Girl, the show balances old-fashioned sweetness with of-the-moment characters and cultural references; neither rural nor urban types comes across as caricatures," Time magazine's Judy Berman wrote. "Best of all, Bell and Shepard make an utterly believable, sympathetic couple — one that is just beginning to understand what it really means to make a lifelong commitment."

That kind of heartfelt storytelling is exactly what Bell has said she wants to do — she told Bustle in February that she's especially interested in promoting diverse stories and encouraging empathy among viewers.

"The more that the world can be exposed to stories that are diverse, stories that are represented by all genders and all ethnicities, it leads us closer and closer to true parity and to the normalization of that all stories are worth telling and being heard," Bell said. "Our job is to entertain, to provide escapism, to provide hope through the lens of art and expression and say, 'Hey, you're not alone.'"

She also told Bustle that being a parent has made her extra conscious of the stories she wants to put into the world. "Looking at what my daughter is ingesting, that's where I get fiery and a little tough," Bell continued. "I feel like it is up to us to create content for young people — young children in general, boys and girls — that sort of help diversify their understanding of what the future holds. I feel like there's a real problem there."

And Meriwether, too, is pushing for voices that are traditionally left out to be heard. Per The New York Times, Bless This Mess is one of three pilots she's been producing that were created by women. "There's still a ton I'm trying to figure out,” she told the outlet. "But I've learned a lot in seven years. Now I'm somewhere between Gandalf and a network hack. And I do feel a responsibility to keep the momentum going, to keep women on the air."

This passion behind-the-scenes will hopefully pair well with the story Bless This Mess is telling — as Shepard said in an interview with Access, there's a reason why this kind of fish-out-of-water story keeps reappearing. It pretty much always makes for laughs. "City folks in the country is always going to be funny," he said. "There's gonna be 20 more versions of this before it's all said and done."

Hopefully, Bless This Mess will continue to rake in good reviews. Whether bringing a fresh story to the table or repurposing a classic tale, there should always be room on TV for more women.