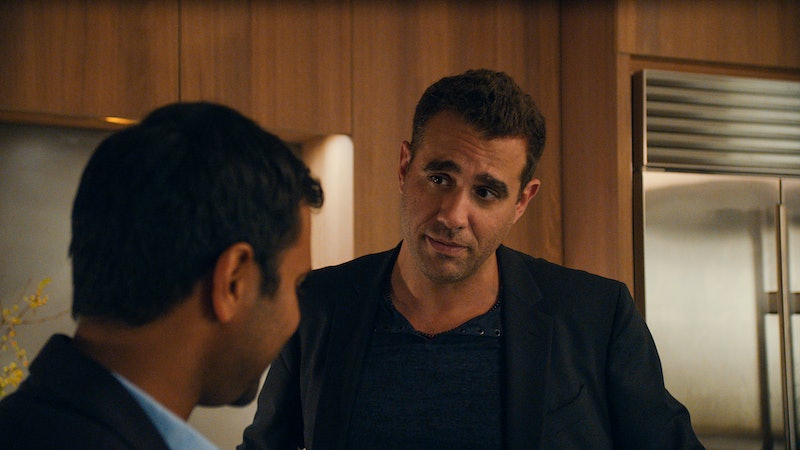 Courtesy of Netflix
By Sabienna Bowman
May 12, 2017

The long wait for Master of None Season 2 is finally over, and Aziz Ansari is serving fans a veritable TV feast with a second season that rivals the brilliance of the first. Season 2 finds Dev delving into his passion for food in a big way, and becoming friends with Bobby Cannavale's character, Chef Jeff, in the process. Trust me, the first question you will have about Dev's new food BFF is whether or not Master of None's Chef Jeff is based on Anthony Bourdain. The character certainly has plenty in common with the bad boy food mogul. (Spoiler alert for Master of None Season 2: These similarities, of course, only have to do with their personalities as celebrity chefs. As viewers find out at the end of the season, Jeff is a serial sexual harasser, and Bourdain has never been accused of anything similar.)

Bourdain is famous for marrying his love of food with travel. Thanks to shows like No Reservations and Parts Unknown, the instantly recognizable chef has become known for venturing around the world and trying exotic foods along the way. Similarly, Chef Jeff was once known for his food travels. When he and Dev connect, Jeff is working on a Food Network-style cupcake competition, but he retains the kind of edge that would make Bourdain proud.

You never know how Chef Jeff is going to react to Dev's suggestions, and his liberal use of the f-bomb is very reminiscent of Bourdain, whose shows almost always run with language advisories. Both Jeff and Bourdain have a reputation for saying exactly what they want, using the most colorfully vulgar metaphors possible. The unpredictability of the character, as well as his larger-than-life presence, will make you think of the Parts Unknown host immediately.

While it is nearly impossible to imagine Bourdain taking part in a show as commercial as Food Network's Cupcake Wars, even Jeff's career trajectory mirrors the real-life chef's path to some degree. Bourdain has been a guest host on Top Chef, made multiple appearances on the food chat show The Chew, and poked fun at his wild past with voice appearances on show's like The Simpsons and Archer.

Bourdain is a daring food lover, but also a savvy businessman who turned his passions into an empire. Jeff walks the same delicate line between commercial work and passion projects. He even advises Dev to stay with a job he doesn't love, in order to be in a better position to get his own show in the future.

Where Jeff and Bourdain diverge is in their treatment of women. Jeff is a serial harasser, and it seems Ansari may have been using the character to comment on the toxic boy's club that is still pervasive in the world of high-end chefs. In a 2017 interview with Fine Dining Lovers, Bourdain discussed the environment of sexual harassment and abuse that existed in some of the kitchens he worked in during his early years, and how those experiences continue to affect him to this day.

Personality-wise, it's clear these two chefs share the same bad boy foodie DNA, but Jeff's unsettling behavior toward women ensures he is no carbon copy of Bourdain.