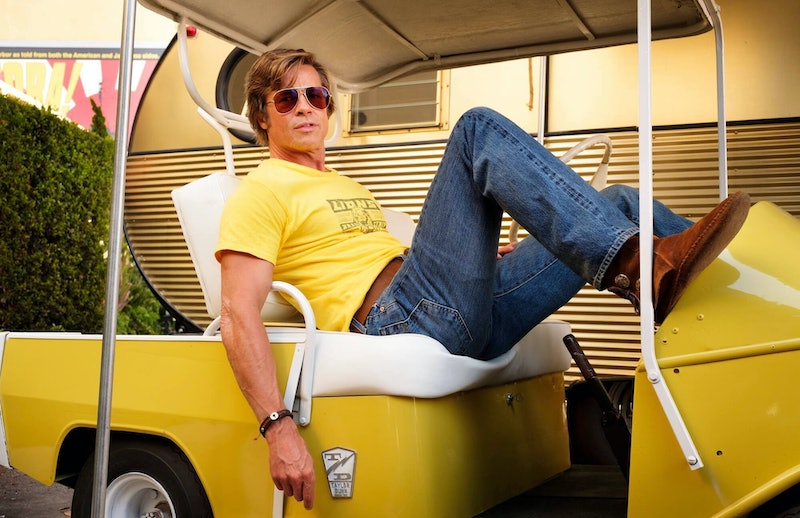 Is an Oscar in Brad Pitt's near future? The 55-year-old star has thrice been nominated for acting roles, but has yet to take home a statue. That could change with his acclaimed role as stuntman Clint Booth in Once Upon a Time in Hollywood, a film about 1960s Hollywood and the Manson Family. The Academy often rewards actors who portray real life characters, but is Clint Booth based on a real stuntman, or was he created specifically for the film by writer and director Quentin Tarantino? The answer is a little of both.

First and foremost, Cliff Booth was not a real person. Pitt is playing a wholly fictional character in Once Upon a Time, one who was created by Tarantino. In the film, Booth is the longtime stuntman and friend of actor Rick Dalton (Leonardo DiCaprio), another fictional character. However, these two fictional characters are surrounded by several real people from actual Hollywood history. These include Dalton's neighbor, actor Sharon Tate, as well as her real life murderers, the Manson Family. The film is largely about Dalton and Booth, whose best years in show business are behind them, trying to navigate a changing Hollywood scene in 1969 as they attempt to stay relevant. And to pull that off, Tarantino looked to some real Hollywood legends to inform his characters.

For Dalton, a former TV leading man struggling to hit it big in movies, Tarantino took inspiration from a number of similar leading men including George Maharis, Edd Byrnes, and Ty Hardin. For the relationship between Dalton and Booth, Tarantino looked to the famous friendship between actor Burt Reynolds and his stuntman (and eventual collaborator/director) Hal Needham. Reynolds and Needham arguably had the most famous friendship between an actor and stuntman in Hollywood history, and were so close that Needham actually lived in Reynolds' guesthouse for a dozen years, according to The Arkansas Times.

In addition to the Reynolds-Needham connection, Tarantino and Pitt were coincidentally both inspired by the same performance when crafting Cliff Booth's personality — and it came from an actor rather than a stuntman. During pre-production on the film, Pitt set up a visit to Tarantino's home because he had a movie in mind that he wanted to watch with the director in order to provide a starting point for his character. The film was the 1971 action-drama Billy Jack, starring Tom Laughlin. Pitt showed up at Tarantino's home with a DVD of the film, without telling the director ahead of time what movie he was bringing, only to discover that Tarantino already had the same film ready to roll. "I go, 'Brad, I have a 35mm print of Billy Jack, threaded up on the projector, waiting for you to get here,'" Tarantino told Pure Cinema Podcast, according to The Hollywood Reporter. "He couldn’t believe that we both were thinking of Billy Jack — and more Tom Laughlin than Billy Jack ... Billy Jack always has a little preamble … a folksy story that he tells before he f—ks you up, and [Cliff] kinda has his own little folksy story."

Laughlin was an actor who began his career with a myriad of TV appearances in the 1950s before transitioning into film in the '60s. He is best known for his portrayal of the somber vigilante Billy Jack, whom he played in five films between 1967 and 1986; all of which he directed.

While Cliff Booth isn't based on a real person, he was at least inspired by a couple of true Hollywood professionals who left their mark on the film industry of the 1960s and '70s.