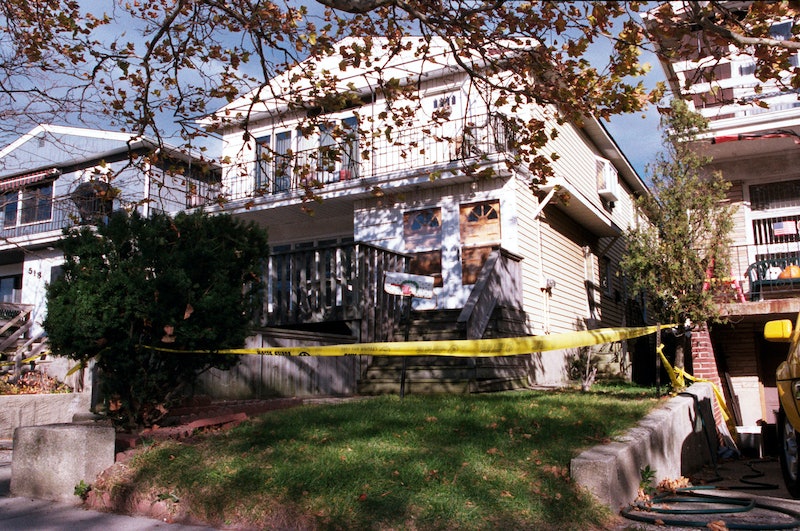 Going out on dates in hopes of finding the perfect match is pretty nerve-wracking for many people. You're putting yourself out there, and there's always the possibility of having a terrible date, being ghosted, or falling for someone who turns out to be wrong for you. And it gets even scarier when you think about trying a dating website because you never know who is on the other side of the computer. Lifetime’s latest movie, Deadly Match, isn’t based on a true story, but it does explore the hazards of online dating with a sinister twist.

According to Lifetime's description, Alyssa Lynch plays Trina, a college student majoring in business who creates a dating website called Let's Date. The name isn't very creative, but the concept must have caught on quickly because Trina's matchmaking business quickly becomes a success. However, everything falls into downward spiral when Trina discovers that her website is somehow being used for prostitution.

Upon this realization, she shuts down the website, but it's only the beginning of her problems because, in classic Lifetime fashion, one of the users ends up dead. Now, Trina has to piece together what happened and stay out of harm's way; the person (or people) responsible for the user's death probably want her off their trail, and clearly, they're not afraid to go to deadly lengths to make that happen.

According to IMDb, Deadly Match (previously known as College Dating App) also stars The Fresh Prince of Bel-Air alum Tatyana Ali as Professor Savoy, who is more than likely one of Trina's business professors. It remains to be seen how much she will be included in the drama, but this is far from her first collaboration with Lifetime. Ali recently appeared in their Christmas lineup as the titular character in Jingle Belle as well as previous films like Wrapped Up In Christmas. Interestingly, Ali revealed to Entertainment Tonight that she found her real-life love online via eHarmony in 2016, so not all matches turn out to be deadly or dangerous.

Unfortunately, there isn't a Deadly Match trailer to lend any more insight about what's to come, so that leads to a ton of questions. How did Trina discover the prostitution ring? Why aren't the police involved in her extensive investigation? Was she running the entire website on her own and juggling college courses? Is it a single person behind the prostitution ring or a larger network that will be harder to eliminate?

Will Trina decide to re-launch the dating site or move back to her small hometown to re-evaluate her life? And, how far will she have to go to solve this dark mystery so she can continue with her life? One thing is for sure - there will be death, twists, and mayhem leading up to a deadly conclusion.

The only way to find out exactly how it all goes down is to tune in and watch how Trina handles this unthinkable situation. Catch Deadly Match when it premieres on Jan. 20 at 8 p.m. ET.