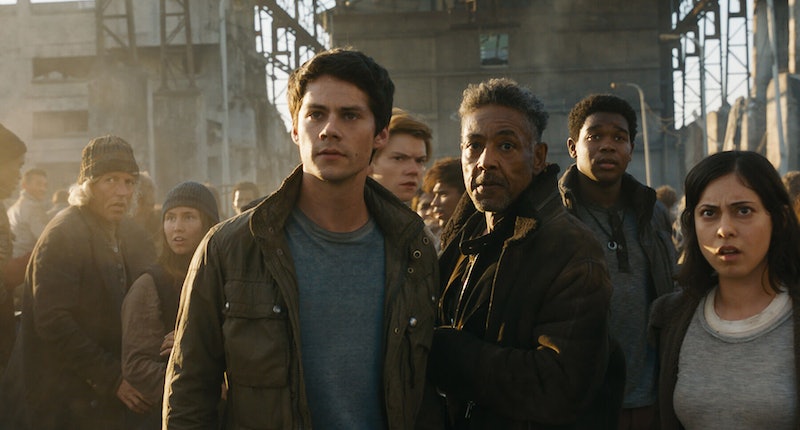 Another year passes, another YA sci-fi saga comes to an end. Almost four years after the release of The Maze Runner, the third film in the saga, The Maze Runner: Death Cure, is hitting theaters and concluding the dystopian action franchise. But while Death Cure is the last Maze Runner movie, fans of the original trilogy and the book series it was adapted from shouldn't be too upset, as there's still hope that more Maze Runner stories could be told onscreen, in one form or another.

In Death Cure, fans of the Maze Runner franchise will get to see what happens to the original crew from the glades, Thomas, Newt, Minho, and Teresa. The movie, like the book it's based on, gives each character a satisfying ending, (light spoilers ahead), though Death Cure's last scene does hint that Thomas' story might not be as over as we thought. His savior complex is still just as alive as ever, and it's clear that, should the studio and creative minds behind the project deem the Maze Runner franchise worthy of more films, there's plenty of story left to be told.

That said, actor Dylan O'Brien, who starred as Thomas for three films and was severely injured on the set of Death Cure, has made it pretty clear that this is where his Maze Runner journey ends. "It means a lot to me to be able to finish the film and finish the trilogy," O'Brien said in an interview with USA Today. Note the use of the word "finish."

In a separate interview, O'Brien also expressed excitement at the future of his career. With Teen Wolf and the Maze Runner trilogy behind him, the actor is unemployed for the first time in his professional career. "I always had the show and/or Maze Runner since the beginning of my working life. So it's going to be a whole new world," he told Australia's Herald Sun. "It's sad to see two things go that I deeply care about, but they'll always be with me."

Other cast members who have been in the trilogy from the beginning, like Kaya Scodelario, who plays Teresa, have used similarly final language when referring to the film. Scodelario even called it a "goodbye," telling ScreenRant, "I think we are really saying a great goodbye to these characters and we are tying up all the loose ends." And director Wes Ball, who helmed all three films, wrote on Twitter that the third movie was particularly challenging because it was "THE END," noting "We wanted to do a proper farewell."

Based on James Dashner's Maze Runner trilogy, it's fitting that the Maze Runner movies would come to an end after this third chapter. After all, it's where the books originally ended. However, since the release of The Death Cure book in 2011, Dashner has added two more books to the series: prequels The Kill Order (2012) and The Fever Code (2016). These two prequels take place far enough before The Maze Runner that they could, in theory, be produced without the participation of the trilogy actors. Thomas and his friends don't really appear in The Kill Order, and in The Fever Code they are children, which would require a cast of brand new actors, allowing for O'Brien, Scodelario, and their co-stars to move on from the series.

The Kill Order in particular tracks the beginning of the Flare virus that kills most of humanity, the consequences of which is crucial to The Death Cure, and has almost nothing to do with Thomas or any of his friends. In the current Hollywood landscape, where zombie and dystopian shows are all the rage (see The Walking Dead), it's not outside the realm of possibility that fans could get more Maze Runner content brought to the screen. Dashner himself recently floated the idea of a prequel television show on Twitter, asking followers, "Is it too early to beg Fox to make the prequels into a TV show?"

The Death Cure might be the final Maze Runner movie, but the end of the Maze Runner world on the screen has yet to be written.