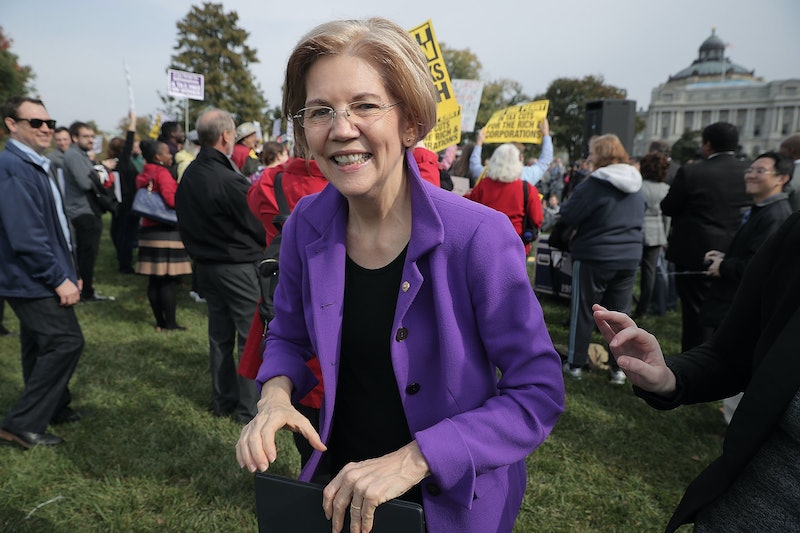 2018 may have just begun, but the possibilities for 2020 are already popping up in Washington. As President Donald Trump gears up for his re-election campaign, it's unclear which Democrat will face off with him in the race for the White House. The names of multiple high profile men, including Joe Biden and Bernie Sanders, have been floated to challenge Trump, but a major question remains: Is Elizabeth Warren running in 2020?

The senior Massachusetts senator revealed in her book This Fight Is Our Fight that any desire she had to run for president in 2016 was thwarted by the knowledge that the race would be more intense than her bid for Senate. However, Warren's national profile continues to grow, and her campaign coffers reflect her popularity among liberals — she's raised $12.8 million for her 2018 re-election campaign, more than the average incumbent senator this early in an election, POLITICO reports. She also spent 2017 traveling the country to promote her book that came out in April (a move many presidential candidates make before launching a campaign) and held more than a dozen town halls in her home state.

While it's too early for an official announcement about 2020, Warren's actions over the past year make a bid for president possible.

Along with Democratic Rep. Maxine Waters, Warren has helped lead the resistance against President Trump in Congress. She fought his strict immigration policy and championed the DREAM Act, continued to hold for-profit universities (like the defunct Trump University) accountable, and called the GOP's tax reform "a heist." Trump then made it personal, calling the senator "Pocahontas" at a November event honoring Native Americans and acting to undermine the federal Consumer Financial Protection Bureau she established. A presidential race between Trump and Warren would certainly be heated. Neither politician is afraid to call it like they see it — and neither is intimidated by the other.

"Let's be honest — Donald Trump is a loser. Count all his failed businesses," Warren wrote in a Facebook post in 2016, which ended "the way I see it, it's our job to make sure he ends this campaign every bit the loser that he started it."

And just because Warren shied away from a 2016 bid doesn't mean she'll do the same in 2020. The stakes were high in the last presidential election, and they could be even higher in the next. As she wrote in a November op-ed for Bustle:

You've got to stand up and fight for what you believe in, even when everyone says it can't be done.

Warren and Sanders were once considered too far left to become the Democratic presidential nominee, and former Hillary Clinton adviser Mark Penn blamed the party's ballot box losses on their "sharply leftist ideas" in a July New York Times op-ed; Warren responded in a speech a few weeks later.

In a post-Trump era, Warren's more progressive views may resonate with Democratic voters more than they would have in years past. She's also bolstered her team with researchers tasked with finding anything from her past that could be dug up in a campaign, according to POLITICO. And considering the conservative attack ads run against her in 2017, the senator is already on both parties' national radars.

Even if Warren continues with her 2018 re-election campaign, don't count out a 2020 presidential bid just yet. You may be seeing a lot more "nevertheless, she persisted" T-shirts in a few short years.