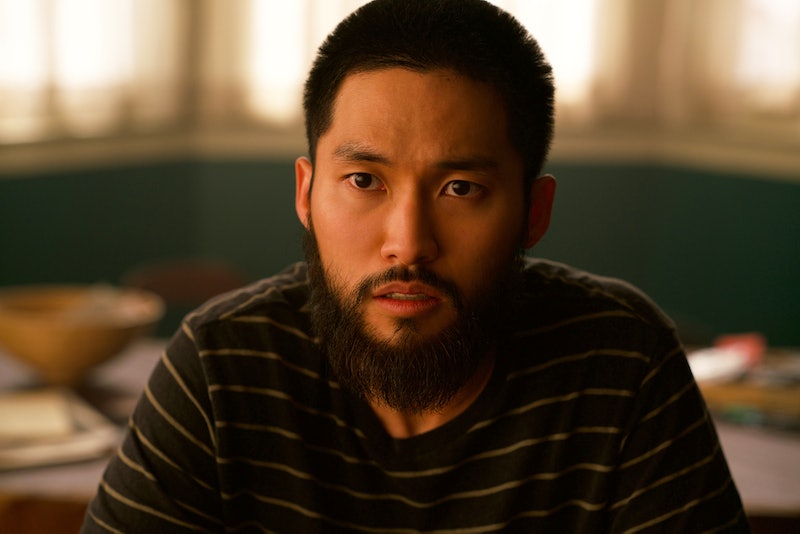 Spoilers ahead for Episodes 1-4 of Devs. In the closing seconds of the most recent episode of Devs, security chief Kenton aggressively pushes Jamie into his apartment just after the cops escort Lily away in handcuffs. He shuts the doors and draws the curtains — telltale TV signs of a man with nefarious plans. We've seen the Amaya henchman kill someone who's betrayed the company: Lily's boyfriend Sergei. This week, he threatened the coder Lyndon's life when he defied an Amaya rule. Isn't possible Kenton has killed Jamie, too, in his quest to cover up Sergei's murder?

The answer is probably not. When Kenton and Amaya boss Forest decide to kill Sergei, the stakes are a lot higher. Sergei is a Russian spy with professional handlers; if they allowed him to simply walk off campus with the intelligence he's gathered, it would certainly fall into enemy hands. So far, Kenton and Forest haven't even made an attempt on the life of Lily, who represents a bigger risk to the company than Jamie. She has a better understanding of how Amaya works, and she's motivated by vengeance to take it down.

Jamie, on the other hand, is motivated only to help Lily and to keep her safe. In fact, other than a coworker and the man experiencing homelessness who lives on her stoop, Jamie is Lily's only ally. If he dies, who is left to rescue her from wherever she's been taken? In all likelihood, Kenton is there to intimidate Jamie into staying quiet.

Over the past two episodes, he's revealed himself to be as tactically restrained as he can be ruthless. For example, he tricks Lily into seeing a psychiatrist and then immediately uses it against her, notifying the police and forcing her into an involuntarily psychiatric hold. Maybe Kenton will tell Jamie how Lily crashed the car earlier that day and attempt to convince him that she really does represent a danger to herself.

Or maybe he'll use Lily's current predicament to teach Jamie to beware: any move taken against Amaya's bests interests will have life-upending consequences.

More like this
Here’s What Happens To Bill & Frank In 'The Last Of Us' Video Game
By Brad Witter
Everything To Know About A Potential 'Lockwood & Co.' Season 2
By Gretchen Smail
All The ’70s Easter Eggs You Missed In 'That ’90s Show'
By Grace Wehniainen
The 'Gossip Girl' Reboot Creator Is “Looking For A New Home” To Air A Potential Season 3
By Brad Witter
Get Even More From Bustle — Sign Up For The Newsletter
From hair trends to relationship advice, our daily newsletter has everything you need to sound like a person who’s on TikTok, even if you aren’t.