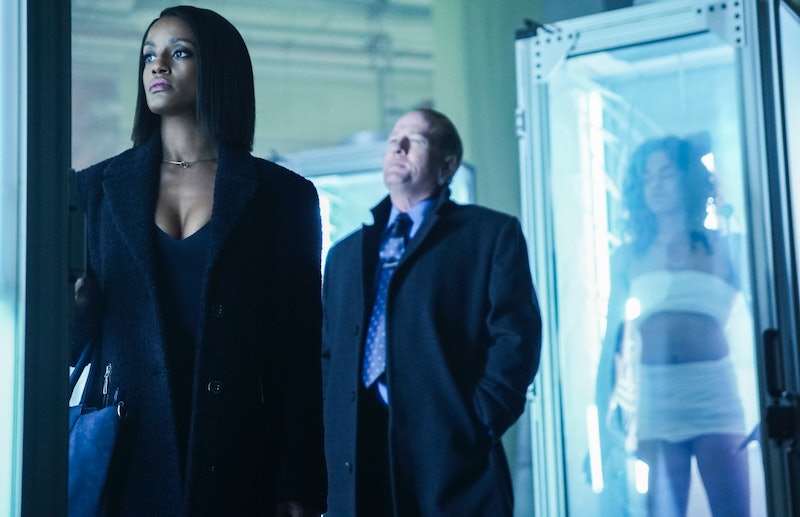 Warning: Spoilers ahead for the Season 2 premiere of Black Lightning. It’s been several months since Black Lightning's Season 1 finale for viewers, but the characters are only one week past the epic showdown that nearly killed our titular hero. And the Season 2 premiere picks up with yet another face-off. In the final moments of the episode, Garfield-Vice-Principal-slash-secret-A.S.A.-agent Kara Fowdy tries to retrieve Tobias White's mysterious briefcase, but is seriously injured in the process. She manages to escape out of a window, but it's a dangerous fall to the ground, leaving it unclear if Kara Fowdy is still alive on Black Lightning.

Predictably, most of the episode serves as a catch-up session for all of the primary and secondary characters. The Green Light drug is taking over the streets and affected youth are either being murdered by cops or held in government-owned experiment pods, while Jefferson’s professional life is spinning out of control; A decision to shut down Garfield leads him to step down as principal in hopes of saving the school for his students.

His personal life is also in the dumps. Following Lynn's decision to team up with the A.S.A and continue her investigative work, his relationship with her is rocky. He doesn't know how to cope with Jennifer’s disdain for her powers, which are becoming increasingly unstable, and his close friend Detective Henderson has figured out his secret identity, putting them at odds, too. On top of that, Anissa is once again going against his advice and stealing money to help residents sue the government for holding their loved ones hostage. And, he finds out that Kara is a part of the organization that wants to kill him and his daughters. Basically, Jefferson is taking all the L’s right now.

Outside of Pierce family drama, Syonide approaches Kara in a dark parking lot and says Tobias needs to chat with her about the contents of his briefcase. Of course, this quickly escalates into a fight and Kara shows some surprising shooting and hand-to-hand combat skills. In the end, she takes out Syonide by piercing her neck with a weaponized high-heel, then steals her phone to locate Tobias.

Kara later visits Gambi and explains that she knows his background with the A.S.A. She tells him that she is a fellow spotter who is "out in the cold," and she's aware Tobias has a briefcase with dangerous contents. She says she will retrieve it and bring it to Gambi, but she wants a way out of the A.S.A. He asks what's in the briefcase and Kara hints that it has to do with a rogue operation. While she doesn't reveal any specifics, she does say the information will cause chaos.

And that brings us to the scene at hand. Kara then goes to confront Tobias, who is visibly upset about Syonide's death. Before she can make her first move, however, he shoots her with a spear gun. As Tobias pulls Kara toward him, she breaks the rope, slides past him, and jumps out of a high-rise window, leaving her fate hanging in the balance. It’s certainly a big cliffhanger that brings up a lot of questions. Did Kara jump out of the window just to avoid Tobias’ torture? Maybe. The notoriously brutal nemesis said he would cut her skin off with a butter knife (ouch), so she may have opted for a quicker death. And, he could have held Kara hostage and forced information out of her that would compromise her goal of becoming free.

Or, perhaps Kara is a metahuman herself. It seems unlikely because she works for the A.S.A., but anything is possible. And, according to Skye P. Marshall's IMDb page, Kara will appear in Episodes 3 and 4 this season. This could be via flashbacks, but perhaps Kara finds a way to heal herself (maybe with Green Light), or she already has some metahuman trait that causes advanced healing.

If she survives, then she will likely go back to Gambi and have to face Jefferson. He was quite upset when he found out her true identity and will want to know why she is suddenly trying to leave the organization. One thing is for sure — he won't trust her at all.

It remains to be seen if Kara is alive, but if she is then it will be interesting to see if she tries to be a resource to Black Lightning or if she has ulterior motives. Anything can happen in Freeland, so don’t be surprised if there is a powerful plot twist coming up.