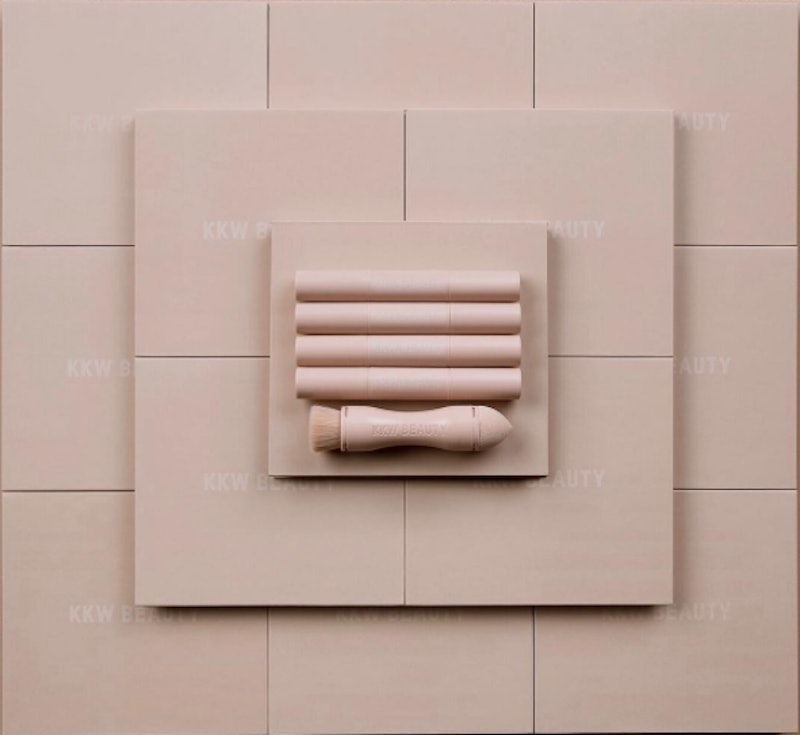 As if she isn't always in the limelight, Kim Kardashian is having a major moment. Ever since the reality star turned business mogul launched her eponymous beauty brand, fans are constantly wondering what's the next KKW Beauty product. It looks like there's finally a definitive answer because Kim Kardashian just teased that KKW Beauty concealers are coming soon.

If there's one thing Kim Kardashian does well, it's getting the internet riled up. Twitter reactions to KKW Beauty's launch were proof that the contouring queen had something special on her hands when she created her own brand. With just four Crème Contour and Highlight Kits upon its initial launch, KKW Beauty was already selling out just as quickly as Kylie Cosmetics — and that's really saying something. It wasn't long before makeup junkies were hooked and itching for the next launch from the Kardashian Klan's biggest star.

Fans saw it coming when Kim K introduced KKW powder contour kits next. After all, she is the queen of a chiseled cheek. Now, the Twitterverse is getting amped because KKW concealers will be making their grand debut soon. The message has been relayed by none other than the KKW Beauty founder and spokesperson herself, Kim Kardashian West, so you know the news is legit.

Giving us the tweet that said what many were already thinking, this Twitter user was sure to call Kim K out and let her know the beauty sphere would be ever so grateful for some bomb.com concealers.

The KUWTK star was quick with a response that stated very clearly she was already in the labs cooking up a batch of under eye brighteners. But this wasn't the first time she has hinted at creating concealers.

During the initial KKW Beauty launch at her Bel-Air mansion, the mogul revealed fans could expect a concealer kit. So, it's not too surprising that KKW tweeted concealers were on the way. That doesn't make the news any less exciting, though. Hence, the Twitterverse is already going crazy, sharing their excitement and opinions.

It's all in the emojis. Triple heart-eyes are a definite nod of approval to KKW.

And when emojis just won't do, a good meme nails it. It doesn't get any more clear than a wink, point, and thumbs up to show that KKW concealers are what the people want.

Girlfriend, preach! More than anything the beauty sphere needs to know whether or not these concealers will be melanin-friendly. Fingers crossed!

But it's really the formula that's going to determine the success of Kim K's new product. Reviews of KKW Beauty Contour Kits were favorable, mentioning the product's creaminess and blendability. Kim K is going to have to apply the same top-notch qualities to her concealers to get consumers on board.

Other than knowing that the concealers will be here soon, there's still no official word on their exact launch date, packaging, or formula. The only thing to be expected is that they'll likely feature the same monochromatic, nude packaging as previous KKW Beauty products.

Although the highlighting/contouring/concealing guru has previously stated full concealer kits were what she had in mind for the future, who's to say she won't opt for a single stick design instead? There's really no telling what form these creams will take.

But one thing's for sure: KKW is taking her soon-to-be released product very seriously. The mogul has already stated she feels she has perfected the process of concealing, mentioning how she used to whiteout her entire under eye to mask darkness caused by her Armenian genes. Her mission was to translate her fool-proof process into a product for all to enjoy.

With that kind of dedication, it's expected that KKW Beauty concealers will be on point. After all, it's already been a year in the making for the creams, which is plenty long enough to get the product perfected.