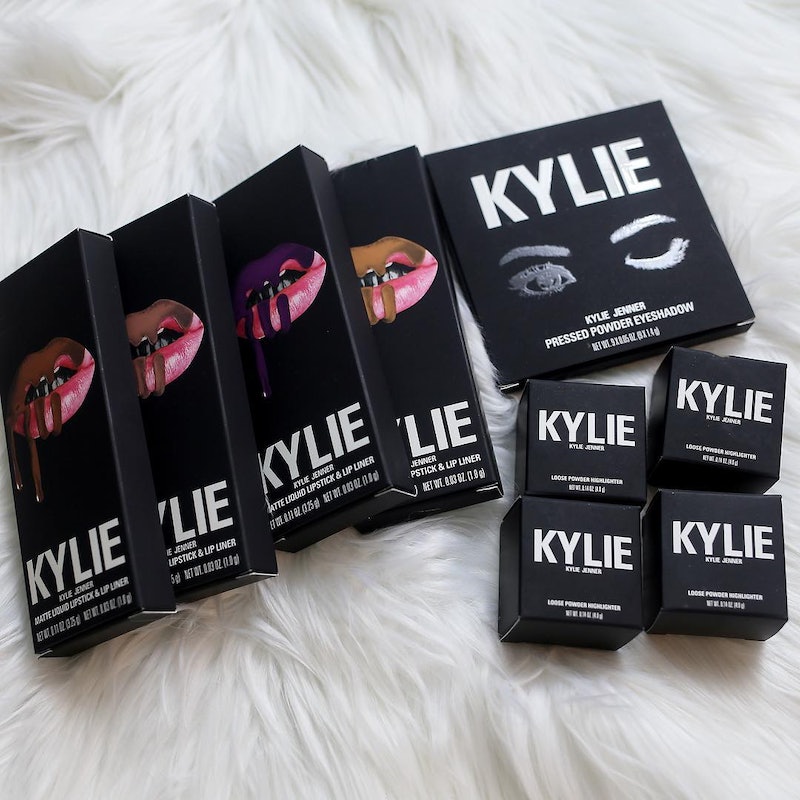 As usual, Jenner took to her Snapchat to tease the upcoming Kylie Cosmetics launches. While she very carefully avoided spilling any tea about what the shades look like, she certainly had no issues previewing just how many new Velvet Liquid Lip Kits are coming. In the Snapchat image, fans can see what appears to be 11 brand new Velvets. While some of the packages in the image may be a few of her existing Velvet lippies, it's clear Jenner has been hard at work potentially developing new hues in one of her most popular products.

On her Snapchat, she explains that she knows how much fans love the formula, and considering that she's got an entire set of minis that she crafted for her Birthday Collection, it seems that she loves them, too. However, it's because of fans' love of the lippies that she has created a line that could rival that of her iconic, matte Lip Kits.

Though Jenner gave no insight into the shades, there's always the possibility that existing hues could be crafted into a velvet formula. Plus, could those Birthday Collection minis be made into full sizes? Though Jenner's shade lipstick shade range is impressive and unique — Grape Soda, anyone? — crafting a new line of entirely new shades does seem unlikely. What makes more sense is for Jenner to take her most popular hues — such as bestsellers Candy K or KoKo K — into the Velvet formula.

As fans know, however, there's really no telling what Jenner will do. After all, the expansion Kylie Cosmetics has seen since its inception is mind boggling. While she began her brand with lipsticks based on the colors of her now infamous pout, Kylie Cosmetics has become so much more by branching out and into highlighters (aka Kylighters), blushes, eyeshadows, and eye liners. Now, she's further diversifying her lipstick collection, and it's an exciting time to be a Jenner fan.

Kylie Cosmetics hasn't been solely based on Jenner's taste in makeup though. Instead, she's worked hand in hand with a few of her famous sisters to craft collaborations for fans of the entire family. Both the first and second KoKo Kollections are truly a reflection of Khloe Kardashian with their vibrant lipstick hues and glowing complexion palette. Then, there was the KKW collection with her set of four nude creme lip formulas. Of course, that collaboration eventually moved into Kim Kardashian West's own cosmetics line. Clearly, makeup is a family affair for the Kardashian and Jenners.

Now, it's a fan affair. However, Jenner is no stranger to giving fans what they want. Not only does she commonly restock popular yet limited edition collections, but she hosts giveaway upon giveaway on her website. She's even given away a Fiat in the past. Yes, an actual car.

While Jenner's new Velvet Liquid Lips may not be family-inspired, there's no doubt that she crafted them with her fans in mind. Whether that means they'll be based on best-selling shades in other formulas or multiple brand new hues, the Kylie Cosmetics mogul has already started the hype for them. While no release date is known, and there's no way to predict when she's inevitably reveal the shades on someone's arm via Snapchat, fans can rest easy knowing that there's more Kylie Cosmetics coming, and it's just in time for the holiday.