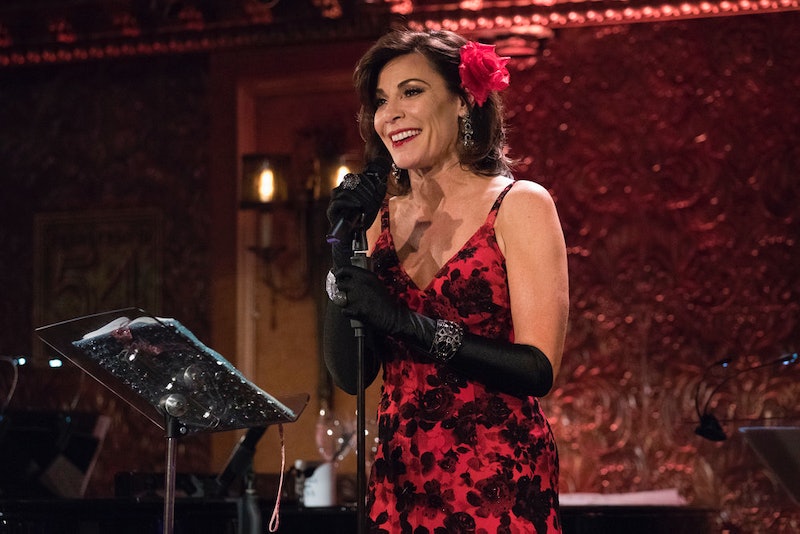 Part of watching the same women for a decade on a show like Real Housewives Of New York is that viewers grow up with the women — they’re adults, sure, but there is some distinctly childlike behavior on these shows. Luann De Lesseps has had some troubles over the past few years, including a big arrest and plea deal, two stints in rehab, and a devastating divorce. That said, she's been cleaning up her act on the drinking front, and part of that seems to be taking it easy when it comes to men. After seasons of Tom drama, is Luann dating on Real Housewives Of New York? It seems like she doesn’t want to rush into anything again.

2017 and 2018 were complicated with a capital C for Luann. She got married, she got divorced, and in December 2017, Luann was arrested for public drunkenness and, among other things, assaulting a police officer. She was in court on and off until the middle of 2018, when she accepted a plea deal and went to rehab. She completed her rehabilitation, but it was soon obvious that Luann’s drinking was again causing her problems, and so she went back to rehab for a second time — she even missed the reunion specials of Real Housewives Of New York Season 10 because of it, which is something that’s very unlike Luann, so you know she was taking it seriously.

Luann took her divorce hard, but in the summer of 2018, she was reportedly dating her agent. According to Page Six. Luann and Rich Super were seen canoodling, but neither would comment on their relationship at the time. That pairing must not have worked out, as Luann recently teased to Us Weekly that she and the rest of her Real Housewives Of New York are hitting the town together in Season 11. “You’re going to see us dating this season, which is fun. The girls are out and about,” she said. “Yeah, I’m looking … I’m a hopeless romantic, so I love love and love men, what can I say?”

For now, Luann seems content to live her life while trying to find her next love — her Instagram account doesn’t show any romantic relationships, or many men at all for that matter. Instead, she’s focusing on maintaining her sobriety — seven months in March 2019, according to Entertainment Tonight — and performing the best she can on her Countess And Friends live cabarets. And she loves it!

“Finally, I found my passion,” she told Entertainment Tonight. “You know, it's a true calling for me. When I'm on stage I feel great and I love it and so, it's exciting to have found something you're passionate about and love to do. And the fans are loving it so I couldn't ask for anything more.”

It seems like things are settled for Luann, so why disrupt that all with a new relationship? If it happens, it happens, but life is definitely a cabaret for her right now.