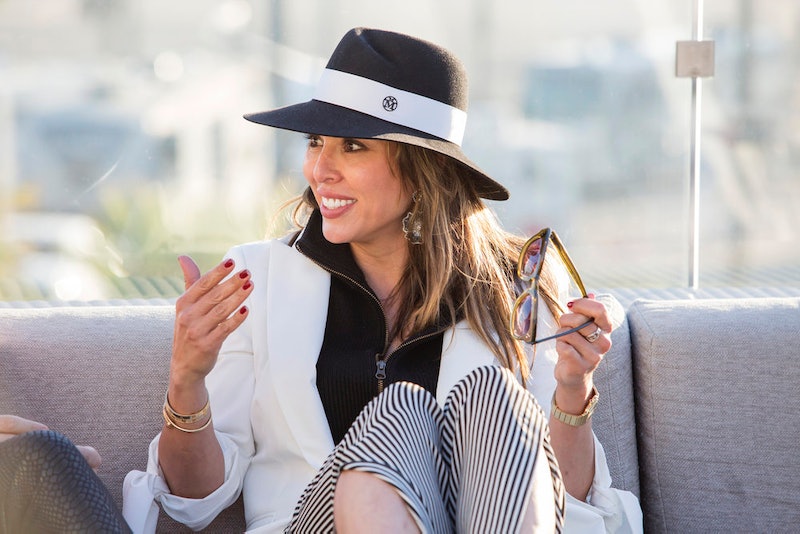 Some of the biggest drama on this season of The Real Housewives Of Orange County isn’t even taking place on the screen — Vicki Gunvalson and Kelly Dodd are in an ongoing feud because Vicki helped set up another friend of hers (she hasn’t been named on the show, probably to protect her privacy) with Michael, Kelly’s ex-husband. The friend and Michael met at a party Vicki threw, got along, and started seeing each other… and the rest, as they say is history. Since this season of Real Housewives was filmed months ago, it’s worth asking — is Kelly's ex-husband Michael still single?

Michael is really good friends with Steve, Vicki’s boyfriend, so Vicki and Steve spent time on double dates with Michael and his new girlfriend, and, well, this is something that Vicki should have told Kelly ahead of time. It’s not that Vicki can’t go out and support her boyfriend’s friendship, but she probably should have mentioned to Kelly what was happening. Because Vicki didn’t, Kelly argued, it seems sneaky and like Vicki was hiding the fact that she was the matchmaker the whole time. Kelly and Michael are officially divorced, but there are obviously a lot of feelings there still. It happens, especially when you’ve been together for over a decade and share a child.

A search on the great, wide Internet came up way short for any information on Michael Dodd’s social channels. He had social media at one point, because he got in a 2016 Twitter fight with Andy Cohen (Michael talked about how Watch What Happens Live, Cohen’s signature show, was “amateur hour”). There was a Twitter handle then, but it’s since been deactivated. Michael is also not tagged in any of Kelly’s photos on Instagram, so he is, for all intents and purposes, an internet ghost whom I cannot spy on. There’s not a real way to see if he and the woman Vicki set him up with are still together, and that’s probably the point — privacy. But, for the record, Kelly has spoken of dating up a storm after her split with Michael, and Michael is probably seeing this woman still, so it seems like both parties are moving on with their lives.

What’s most important for Kelly and Michael is clearly their daughter — the former spouses may not get along all the time, but showing a united front for their child is the best thing for her, and potentially the most seamless way for her to get through this divorce unscathed. It’s still not easy, though. Of her and Jolie’s new post-divorce financial situation, Kelly told Page Six, “It was really hard for [Jolie] to adjust, and it was kind of sad for me to see her have to go through that, but it was actually a great learning experience for her because you know what — I don’t want her to be 20 and all of a sudden everything goes away. It was actually good for her.”

For now, Kelly and Michael are doing their best to co-parent their daughter, and they’ve both moved on into other relationships, though it's not clear yet if any are or will become long-term.