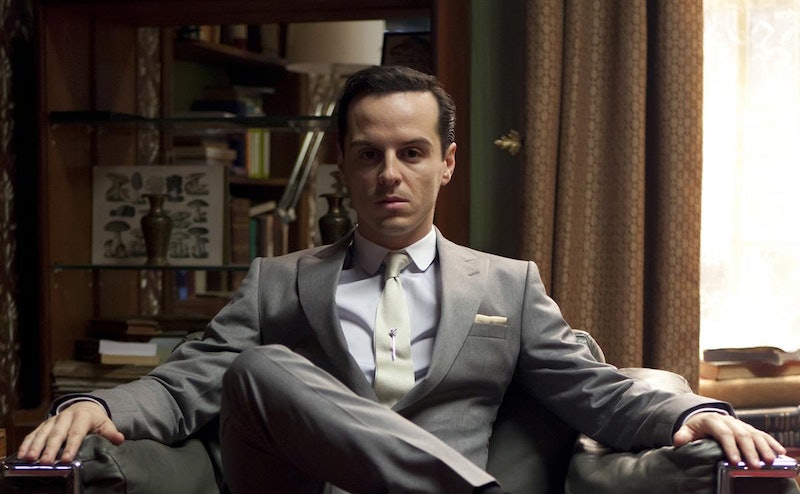 Season 4 of Sherlock got off to a shocking start on Sunday, with a heartbreaking plot-twist. And, if you've not seen "The Six Thatchers," the first episode in the new season, beware as there are SPOILERS ahead. Sherlock's first case of the season was complicated for several reasons. The premiere episode of Sherlock Season 4 starts out following its source material, referring to Arthur Conan Doyle's story "The Adventure of the Six Napoleons," but instead of finding the black pearl of the Borgias inside, one of the busts of Margaret Thatcher contains the USB stick featuring information about Mary Watson's previous life as a spy. But, perhaps the most important question fans have asked has to be is Moriarty in Season 4 of Sherlock? No one on the show believes that the character's dead.

Within the first few minutes of "The Six Thatchers," Sherlock discusses Moriarty in great detail. Despite being dead, it's clear that the antagonist's presence looms large over the series, and he isn't completely done playing games with Sherlock just yet. In fact, Sherlock even goes as far as to say that he believes Moriarty to have constructed some sort of "posthumous game" or "posthumous revenge." It seems that Moriarty's revenge has already started as Sherlock is having visions of him, and is sure that there is a master plan to be executed. The mere anticipation proves Moriarty has influence even in the afterlife.

While Moriarty appears to be dead, Bustle writer Sage Young pointed out that actor Andrew Scott is listed on IMDb as appearing in Season 4, Episode 3 of Sherlock. Even more intriguing is the fact that the episode is called "The Final Problem" and the synopsis says that "Holmes and Watson travel to Europe to escape Moriarty's vengeance." Dead or alive, Moriarty is causing havoc in Sherlock's life, and it appears as though the protagonists are going to have to go to great lengths to escape his wrath.

Another seemingly important Moriarty reference in "The Six Thatchers" relates to a disc that Mary sent to Sherlock after her death. While the video message asked the detective to take care of Watson, the disc had the words "Miss me?" on the front. Mary did this to get Sherlock's attention, but it's an interesting reminder of the villain, and suggests to the audience that there is still more Moriarty to come — in some way or another.