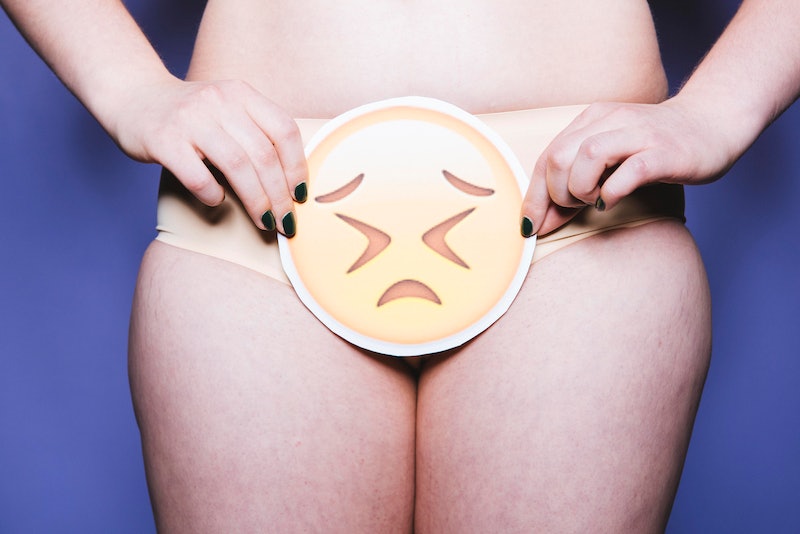 In this week's Sex IDK column, Emma McGowan, certified sex educator and writer, addresses healthy vaginal discharge and when it's time to see a doctor.

Q: “I always wonder how normal discharge is and when you should be concerned. I've gone to the doctor concerned so many times about different things that I later find out to be very normal.”

Did anyone teach you about vaginal discharge? I feel like it’s one of those things that gets left out of puberty sex ed talks. I learned about it because my mom is awesome and not only talked about stuff — even if I didn’t want to hear it — but also bought me all the puberty books as soon as my boobs started growing. But I know that plenty of women and other people with vaginas don’t have awesome, sex positive, feminist moms who buy them Our Bodies, Ourselves at age eight.

Additionally, everyone’s vaginal discharge changes depending on where in their menstrual cycle they are, because it’s controlled by hormones.

Here’s a breakdown of how healthy vaginal discharge changes throughout the menstrual cycle, for people who aren’t on hormonal birth control like the Pill, patch, implant, or hormonal IUD. And remember — not everyone experiences these phases exactly the same. So if your body does something a little different from what’s listed here — but not different for you — don’t stress about it.

During your period, you wont be able to see any vaginal discharge, because the blood hides it.

2. A Few Days After Your Period

Just after your period, you may notice a couple of days with brownish discharge — which is the final bit of blood being cleaned out of your vaginal canal — followed by a couple “dry” days, where you don’t notice any discharge.

3. Before And During Ovulation

A couple of days before ovulation, your body is ripening the egg. Your vaginal discharge during this time may be yellowish, white, or cloudy and it might have a sticky feeling to it. And just before ovulation, you might notice a few days of slippery, clear vaginal discharge. It’s often compared to egg whites in terms of color and consistency and it can be stretched between your fingers.

Following ovulation, your body is going to do the reverse of what it did leading up to ovulation. You may notice a tackier, white or yellow discharge, followed by a few dry days leading up to your period. Some people also experience an increase in discharge again just before their period starts. That discharge tends to be cloudy and white.

So that’s what a happy, healthy vagina is generally doing. But what does an unhealthy, unhappy vagina look and feel like? Vaginal discharge is one way to keep track of your vaginal health, so here are some signs that something isn’t right — and it’s time to make an appointment with your doctor.

Vaginas and vulvas have their own odor and it’s a good idea to familiarize yourself with yours, so that you know when something isn’t right. If there’s a strong fishy smell that becomes more pronounced after you’ve had intercourse without a condom, you might have bacterial vaginosis. It’s a super common issue that happens when the good bacteria in your vagina gets upset for some reason and bad bacteria take over. It’s totally treatable with antibiotics or medicated creams, but you do need to go to the doctor for a prescription.

2. The Color Has Changed Dramatically

If you notice a new color down there, pay attention. For example, Dr. Leah Millheiser, MD, clinical assistant professor in the department of OB/GYN and director of the Female Sexual Medicine Program at Stanford University, says that “a greenish, frothy-like discharge” can be a symptom of trichomoniasis, one of the most common STIs. Gonorrhea can also show up as a green, yellow, or white discharge.

But, again, both are totally treatable! Just pay your doctor a visit and they'll help.

3. Everything Itches Or Hurts

There are a lot of potential causes for an itchy or painful vulva or vagina. Yeast infection. STI. Irritating underwear. Bacterial vaginosis. But your vagina and vulva shouldn’t be hurting or itchy, so if you’re finding yourself scratching around for a couple of days, make an appointment.

These Changes In Discharge Don’t Require A Doctor’s Visit

Those are some examples of changes that definitely require a doctor’s appointment — but not every change does. Dr. Millheiser says that the majority of time when patients come in because they’re experiencing a change in amount of discharge, there’s not actually a problem. So if you’re suddenly wetter than normal? You’re probably fine.

Other common things Dr. Millheiser sees are a change to yellowish discharge after menopause. She’s also had patients come in with questions about their vaginal discharge when it’s not actually vaginal discharge at all — it’s ejaculate. If you have intercourse without a condom, it can take anywhere from a couple hours to a couple days for all of the ejaculate to leave your body. So if you’re noticing something different, the first question to ask, before you panic and call your healthcare provider, is: Did I do it recently?

And, finally, Dr. Millheiser wants you all to know that you should never try to self treat a problem with your vagina or vulva and you should never, ever use a douche. “The vagina’s like a self cleaning oven — it doesn’t need any help,” she says, with an added reminder that douching washes away all of the bacteria — including the good ones. And when you wash away good bacteria, that leaves space for bad bacteria to come in and set up house. If that happens, then you will need to visit the doctor.