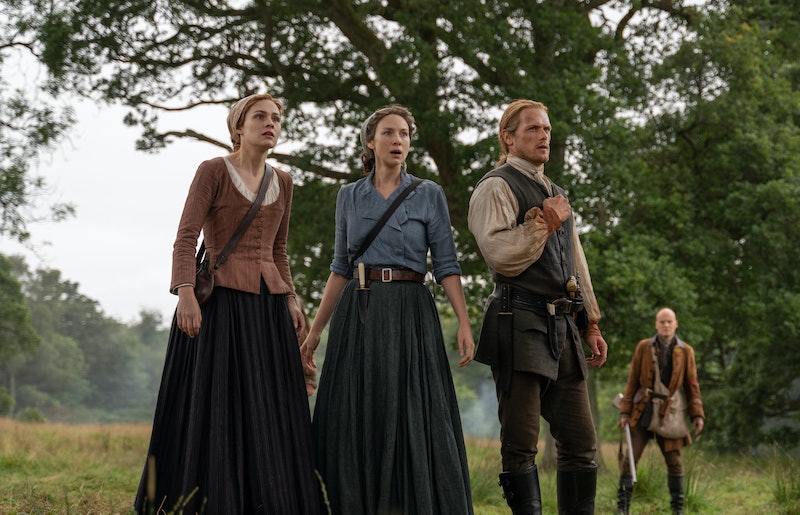 Spoilers ahead for Episode 7 of Outlander Season 5. The Battle of Alamance between the Regulators and the Red Coats had several casualties on Outlander — including, potentially, Roger. In the March 29 episode, Roger was mistaken for a Regulator prisoner and ordered to be hanged by Lord Tryon. Brianna, Claire, and Jamie then found his hooded body hanging from a tree, watching in horror as Jamie's soldiers took him down. The episode ends there. But Roger can't really be dead, can he? Would Outlander really kill off such a central character? Warning: Book spoilers ahead.

In the fifth Outlander book, The Fiery Cross, Roger was also mistakenly hanged at the Battle of Alamance. Rather than cross enemy lines to warn Murtagh of the Regulators' eventual defeat, Roger went over to speak to Jamie's Quaker friend hoping to come to a non-violent resolution. In both instances, he ran into his ancestor Morag MacKenzie, whose husband William interpreted their interaction as romantic and nearly beat Roger to death before falsely turning him into the British as a Regulator.

Yet, after nearly an hour of hanging, Claire was able to save Roger's life. Claire explained that the hanging had been executed haphazardly and Roger's neck hadn't snapped. He still showed signs of life, so Claire performed a cricothyrotomy, or tracheotomy, on her son-in-law that allowed him to survive. Acknowledging the rather sensational points of this storyline, author Diana Gabaldon used the book's acknowledgments to thank the doctor who provided the "technical advice on how to hang someone, then cut his throat, and not kill him in the process."

Following the hanging and surgery, Roger had a long recovery, with his family worrying he'd never be able to speak again, let alone sing. Actor Richard Rankin hinted something similar while speaking to O Magazine, saying that the writers were "unfortunately trying to squeeze as many" songs by him as possible into Season 5 because his singing days were numbered. But even though Roger won't be delivering any more renditions of Three Dog Night's "Joy to the Word," he should survive thanks to some unbelievable circumstances and his mother-in-law's outrageous medical skills. Too bad the same can't be said for Murtagh.