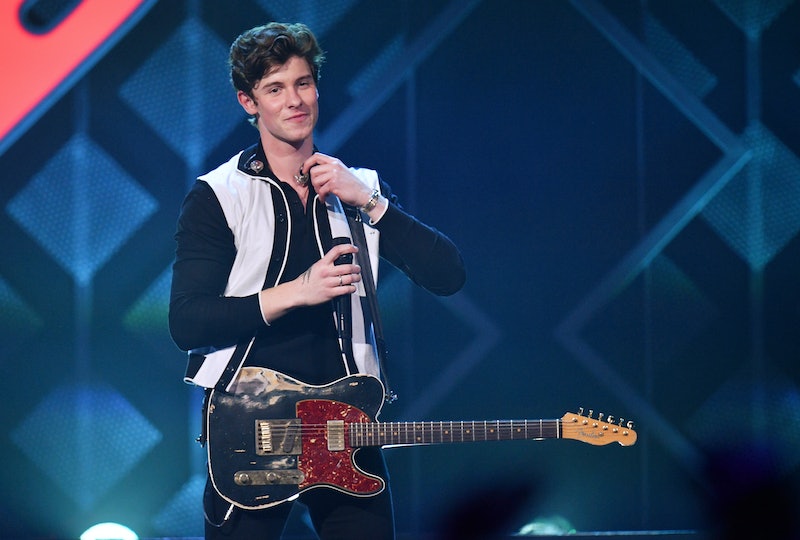 The good news about breaking up with someone and then seeing them get engaged to to Justin Bieber just months later is that it can only happen once in your life — hopefully. Clearly, Shawn Mendes and Hailey Baldwin's somewhat undefined relationship ended in 2018, but now is Shawn Mendes dating anyone in 2019? It seems like the "In My Blood" singer is currently flying solo, so you'll want to pull up a seat to watch Mendes perform at the 2019 Grammys on Feb. 10 because the young heartthrob has given everyone the hope that he's open to dating a fan.

Last August, while talking with Teen Vogue, Mendes said, "Sure, I’d date a fan. Why wouldn’t you date someone who admires you? Isn’t that what couples always say? 'She’s my biggest fan.'" You know, he has a point there. Mendes's dating history mostly includes names like Baldwin or Cabello, but those relationships didn't necessarily pan out. When talking about his sorta-kinda relationship with model Hailey Baldwin, Mendes told Rolling Stone, "I don’t even wanna put a title on it. I think it was more of a zone of limbo." That was at the end of 2018, after Baldwin and Mendes attended the 2018 Met Gala together and made headlines doing so.

Now that a new year has arrived, it seems like the perfect time for Mendes to start an exciting new relationship. During the same interview with Rolling Stone, the Canadian singer opened up about the pressures as a celebrity to have a girlfriend. "I had this thought: ‘I have to get paparazzied with someone. Who am I gonna get? I’m not relevant," Mendes said. Considering that he just showed an impressive level of vulnerability and self-awareness with that statement, he probably won't have a hard time finding someone to love soon.

As much as Mendes feels that he's falling behind in the celebrity love game — and considering that he's only 20 year-old, shows how extreme the pressures for young celebs to find ship-worthy relationships are — he's certainly killing it career wise. The singer's 2018 album, aptly titled Shawn Mendes, earned him two Grammy award nominations. One nomination is for Pop Vocal Album and the other is for the song "In My Blood," up for Song of the Year.

Not only will Mendes attend the 2019 Grammys to celebrate his first year being nominated for the consummate music awards, but Mendes is set to perform, too. On Thursday night, the singer posted a photo on his Instagram of himself and Miley Cyrus wearing matching leather jackets with graphic images of Dolly Parton on the back, and Entertainment Tonight speculated that the two will perform Parton's 1983 duet with Kenny Rogers, singing "Islands in the Stream."

The 2019 Grammys will definitely be a monumental night for Mendes, who told Billboard, "I was more overwhelmed than I was expecting," in reaction to the news of his nominations. Perhaps 2019 will be a life-changing year for the singer, romance-wise, as well.