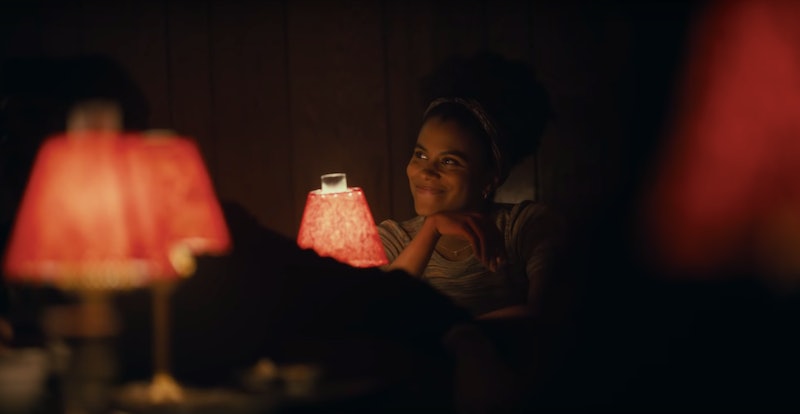 Despite his place in the Batman canon, the Joker wasn't always a super-villain. In the Oct. 4 release, Joker, Arthur Fleck (Joaquin Phoenix) starts out the movie as an aspiring comedian doing his best to get by, take care of his mother (Frances Conroy), and achieve his dreams of fame. And though he's also a social outcast without many friends, he does have a connection with Zazie Beetz's character Sophie Dumond, his neighbor and a single mom. But Sophie from Joker isn't adapted from DC Comics, so there's little in the (distantly connected) source material to look back on.

This isn't the first time Beetz is playing a character in a comic book film. In last year's Deadpool 2, she played the badass mutant Domino. An existing Marvel Comics character also known as Neena Thurman, Domino can manipulate luck so that the odds are always in her favor.

However, this time around, Beetz is playing a civilian, not a costumed hero. Arthur develops feelings for Sophie, which is pretty inconvenient timing, as he's also descending into madness and chaos. While some viewers may leave wondering why Sophie even associates with Arthur considering some of his actions, Beetz has said that the movie is all about having empathy towards the circumstances of a person like him, not the person himself.

“It’s kind of an empathy toward isolation and an empathy towards what is our duty as a society to address people who slip through the cracks in a way. There is a lot of culture of that right now," Beetz told Variety, per IndieWire. "So is it empathy for that or just an observation on personalities who struggle?”

Sophie is new to the DC universe, where the Joker's main love interest is Harley Quinn — a doctor who he manipulated into freeing him from Arkham Asylum and winds up becoming his faithful sidekick and lover. Some fans, such as Reddit user cbekel3618, are guessing that Sophie could be the Joker film universe's iteration of Harley at some point. But there's another comic book character with a romantic link to the Joker who seems closer to Sophie, mostly because she's also a maternal figure.

In the graphic novel-turned-animated film Batman: The Killing Joke, a glimpse into the villain's origins reveals that the Joker had a pregnant wife named Jeannie, who he was struggling to support. Because they didn't have much money, the Joker turned to crime. But just as he was meeting with two of his criminal colleagues, he received news that his wife and their unborn child died in an accident. Whether Jeannie might have been a source of inspiration for Sophie's character hasn't been confirmed, but Joker director Todd Phillips said at a press conference at the Venice International Film Festival, per ComicBook.com, that the film does draw some inspiration from The Killing Joke.

Sophie, however, may be closer to a famous female character in a completely different kind of story. The Guardian's Christina Newland notes that Arthur's obsession with and fantasy life around Sophie seems to parallel Travis Bickle's (Robert De Niro) relationship to Betsy (Cybill Shepherd) in Taxi Driver, a movie Joker director Todd Phillips has referenced as inspiration.

With that in mind, you might be better off preparing for Joker with a Martin Scorsese marathon than a stack of DC Comics.