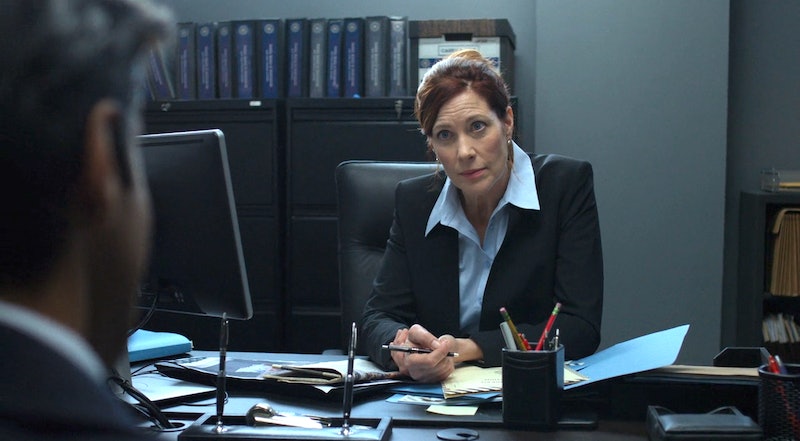 Spoilers for Daredevil Season 3, Episodes 1-9 follow. While Agent Ray Nadeem is a little misguided during the beginning of Daredevil Season 3, he means well. Unfortunately, his good intentions fall apart since his boss Tammy Hattley on Daredevil works for Kingpin. In "Revelations," Ray tells Tammy that he has figured out that Agent Dex is working for Wilson Fisk. Unfortunately, Tammy is too, so she kills the other FBI officer in the room and brings Ray into the Fisk fold. Turns out, Fisk owns many of the upper FBI agents. While this Tammy reveal isn't too surprising since she seemed too keen to help Ray out in the beginning, it's a brand new storyline created just for the Daredevil show.

Ray moves Fisk to his new hotel prison because he thinks this deal will help clean up the streets of more criminals. Unfortunately, Matt, Karen, and Foggy are right that Fisk is just playing this federal agent. At that point, viewers should have suspected that Tammy was part of the deal. But her true motivation doesn't come out until "Revelations." She implies to Ray that Fisk had one of her children killed, so to keep her surviving daughter safe, she works for him. Fisk blackmails plenty of other federal agents too, so they all work for him from inside the government. And they refer to him by the code name "Kingpin."

Tammy and Ray have known each other for 10 years and she advises him to play along to protect his wife and son. She also tells Ray that Kingpin had specifically targeted this moral federal agent. He is the reason why Ray's sister-in-law lost her insurance. When Ray paid for her care, he became in debt which made him desperate to make the Fisk deal. So every single thing Ray has done in Season 3 was part of Fisk's master plan.

Ray and Tammy aren't in the Daredevil comics, so this story is created just for the TV show. But it highlights the reach that Fisk has not only in New York City but over the federal government as well. With Ray now reluctantly on board the Fisk train, he's now part of the inner conspiracy, which includes Agent Dex being reinstated. Ray is fully aware of how deadly this Daredevil impersonator is and as part of Fisk's team of FBI agents, Ray is forced to lure the real Daredevil out.

Like Ray, Tammy seems like she was a decent FBI agent before Fisk entered her life. But she's in way too deep. Thankfully though, Ray doesn't seem as on board with this corruption. So while he's been leading his recent buddy Daredevil into a trap, there's a chance that he can help Matt take down Kingpin from the inside. However, there's a major chance that Ray could get himself killed in the process, especially since it seems that Agent Ray Nadeem is too pure for this world. Let's just hope that the real Daredevil can save him before it's too late.