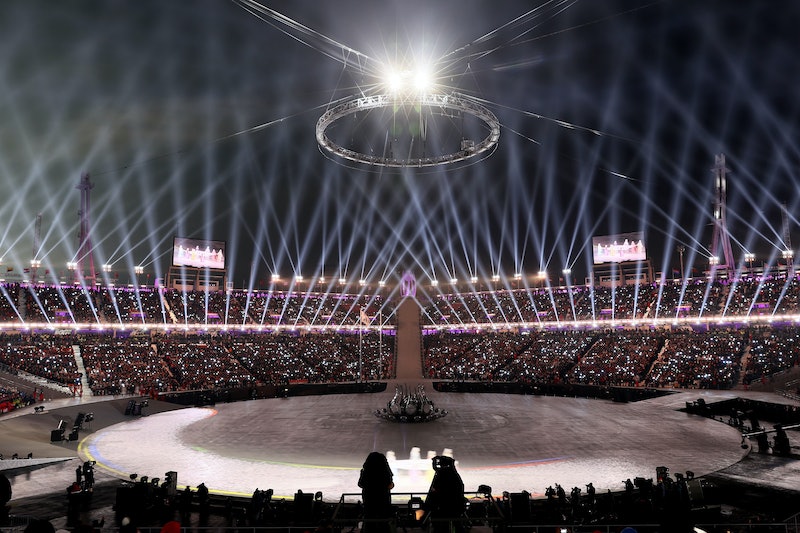 After four years free of international curling footage on major American networks, the Winter Olympics have returned to give a snowy jolt to the sports world. Featuring all the best athletes in sports such as bobsledding, luge, skeleton, and more, the 2018 Winter Olympics will come to an end with an extravagant closing ceremony on Feb. 25. There, South Korea will hand off the torch to China, the host country of the 2022 Winter Games. It's a valued tradition, but those counting on NBC to air the Olympic closing ceremony live may be late to the celebration

NBC is airing the Olympic closing ceremony on Sunday, Feb. 25 at 8:00 p.m. ET. While that's primetime for American audiences and will probably result in big viewing numbers, the time slot is actually 14 hours later than the real thing. The Olympics are taking place in PyeongChang County. So while the closing ceremony is happening at 8:00 p.m. in South Korea, that translates into 6:00 a.m ET. So it's not surprising that NBC is opting to hold the event for later.

Any early birds hoping to watch the closing ceremony live can do so, just not on the actual network. NBC will be live-streaming the event beginning at 6:00 a.m. ET that Sunday on the NBCOlympics.com and the NBC app. The New York Times reported earlier that NBCOlympics.com would be "streaming the Games live, in their entirety," so that includes this final send-off. NBC structured its coverage of the opening ceremony the same way, live-streaming the event on the web and apps and airing a taped version with commentary during primetime.

The 6:00 a.m. start time may be a bit early for most Olympics fans, but those hoping to live-tweet the ceremonies alongside the rest of the world will have to wake up early to watch. And it may be necessary to catch the ceremonies in real time to catch all the surprising, shocking moments before they're spoiled. Otherwise, you can stay off social media and hope for the best.

While the closing ceremony is probably of interest to any fan of the Olympics or winter sports in general, early buzz on the event hints that it'll also be exciting for fans of Korean pop music. The Korean music industry has slowly been going international and mainstream, with artists like PSY and the boy band BTS finding global success. The closing ceremonies will feature two Korean pop artists performing for their biggest audience yet. Closing out South Korea's closing ceremony will be 8-member boy band EXO and K-pop veteran CL, formerly of the group 2NE1. The eyes and ears of the whole world will be on K-pop for the night, further expanding the genre's reach. Most of the program is still under wraps, so you'll have to tune in to see the spectacle South Korea has planned for its final Winter Games effort.

Whether viewers are hoping to see their favorite athletes celebrated, performances by international pop phenomenons, or simply to see South Korea make the most of its month in the international spotlight, there are plenty of reasons to wake up at the crack of dawn to catch a glimpse at the 2018 Olympic closing ceremonies. If you happen to sleep through the app and web live airings, or just can't imagine waking up at 6:00 a.m. if you don't have to, then the 8:00 p.m. NBC broadcast should be able to provide all the coverage needed. Even if you're late to the show, this closing ceremony should be one to remember. And then it's just a two-year wait for the next Olympics celebration.