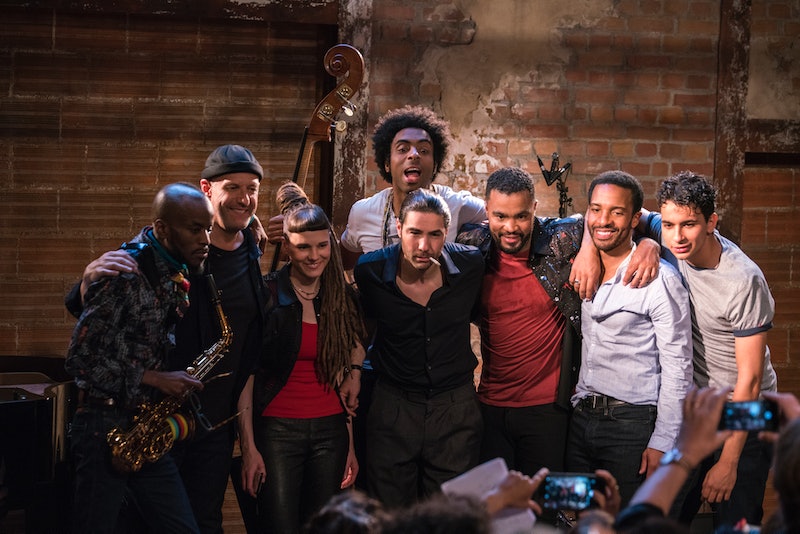 La La Land's Damien Chazelle is diving back into the world of jazz with The Eddy, and at the center of it all is the show's eponymous club. Run by André Holland's Elliot Udo, The Eddy is a jazz club in Paris where the lives of several musicians intersect. Though The Eddy isn't a real club, it does draw inspiration from history and Chazelle's own experiences growing up in France.

According to Variety, The Eddy is located in the 13th arrondissement in Paris, where Chazelle grew up for part of his childhood. Chazelle wanted to introduce viewers to the real Paris: not a city of striped shirts, baguettes, and tourists, but a grittier place full of ethnic diversity and art that blooms despite hardships. So while The Eddy is a fictional venue, it's firmly rooted in Paris' thriving jazz scene.

Though many associate jazz with Paris now, the musical style was actually imported from America. Per The Washington Post, jazz landed in Paris during World War I when James Reese Europe led his small group of black American troops across the country. The soldiers had formed a jazz band during the war, and hearing their music kicked off a dance hall craze, with the French eager to hear more. In the 1920s, black artists like Josephine Baker and Langston Hughes migrated to Paris, capitalizing on the thriving Parisian arts scene that showed a particular appreciation for black creativity.

During World War II, the Vichy regime banned American music, but jazz continued to play, with bands translating the words into French. Jazz became associated with freedom and the resistance, and for black artists fleeing the country during the Civil Rights Era, Paris became a welcome refuge. Musicians like Sidney Bechet, Bud Powell, and Miles Davis all created music in the neighborhoods that surround the fictional Eddy club.

The Eddy did not film in any preexisting club; rather, the structure itself was created as a set and soundstage for the show. "We built a jazz club!" The Eddy writer Jack Thorne told The Hollywood Reporter. He noted that the crew "were actually talking about opening it at one point," though.

With its weathered brick walls, visible scaffolding, and dimly lit appearance, The Eddy seems reminiscent of the "cave" jazz clubs that have existed since WWII, like Caveau de la Huchette. That look seems to be falling out of vogue in Paris, where upscale, spacious venues like Jazz Club Etoile and the outdoor La Petite Halle are attracting younger crowds.

Making The Eddy a grungy alternative to the nicer Parisian clubs seems intentional, however. It's a venue full of lower-income artists trying to make it on the jazz scene, run by a man who's struggling to keep the lights on while he cares for his estranged daughter. Even if all their performances don't always hit it out of the park, all the musicians we meet are sincere about their love of the art form, and The Eddy represents a place where they can all fall apart and come together again.