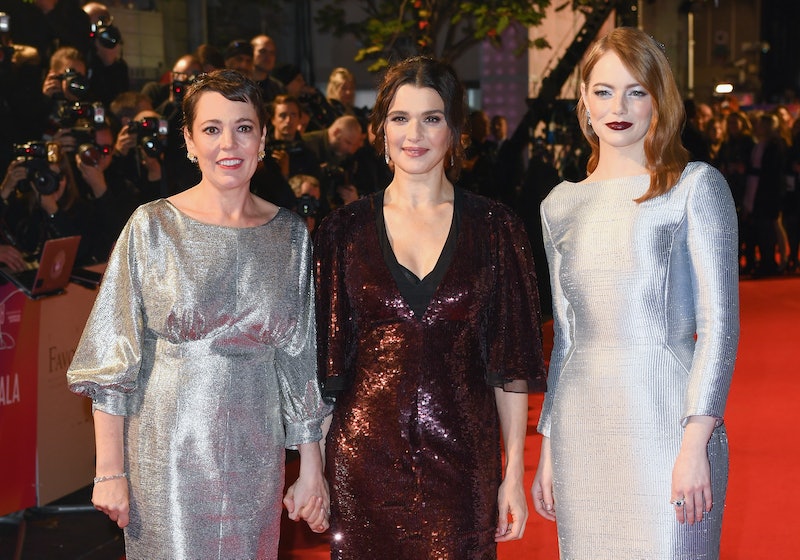 Unstable queens, scheming ladies of the court, Joe Alwyn dancing — with all of those exciting elements, it's no wonder that audiences everywhere have fallen in love with The Favourite. Naturally, that means Oscar fans are waiting to catch up on the critically-acclaimed film, leading many to wonder: Is The Favourite on Netflix?

Unfortunately, audiences who are hoping to catch the Best Picture nominee before the 2019 Academy Awards on Sunday won't be able see the The Favourite on Netflix. However, there are still a few ways to see Olivia Colman in all of her royal glory from the comfort of your own home, as the film is available for purchase on Amazon Prime, iTunes, Google Play and YouTube.

The film focuses on Queen Anne, played by Colman, who is attempting to run the English empire in between bouts of illness and madness. She relies heavily on her childhood friend, Sarah Churchill, the first Duchess of Marlborough (Rachel Weisz), who assists her in all things, although their relationship is beginning to become strained under the weight of Churchill's demands. Enter: Emma Stone's Abigail, a distant cousin of Churchill who came from a well-to-do family, but has fallen on hard times. After landing a job in the palace, Abigail proves that she's willing to do whatever it takes in order to secure herself a reliable future — even if that means unseating Churchill in the process.

The Favourite, which is directed by Yorgos Lanthimos — who earned a Best Original Screenplay nomination last year for The Lobster — is up for a whopping 10 Oscars on Sunday night, including Best Picture, Best Director and Best Original Screenplay for Lanthimos, and acting nominations for all three of the film's leading ladies. Emma Stone and Rachel Weisz will face off against each other in the Best Supporting Actress category, while Colman could potentially take home a trophy for Best Actress at the ceremony.

Whether or not Colman wins the prize at this year's Oscars, she won't have to give up her crown any time soon, as she's taking over the role of Queen Elizabeth II in Season 3 of The Crown. And according to an interview in the Press Association, the BAFTA-award winning actress found it much harder to step into the shoes previously occupied by Claire Foy than portraying Queen Anne. "It could not be more different. I find the harder is Queen Elizabeth because everyone knows what she looks like," Colman said.

"Everyone knows what she sounds like, everyone has an opinion on whether the casting is right. I am loving the job, I am loving trying to play her, but I find her harder. I want to do it justice and do it well and be respectful and all of those things — and the writing is incredible so that helps," she continued.

Colman also noted that the anticipation surrounding Season 3 of The Crown has made working on the series even harder, as she has a great deal of pressure to live up to. "I love doing the work so much it’s almost a shame that people have to see it, because people who weren’t there get to say what they think about it, which is quite hard," she explained.

Of course, there is another reason why Colman found it much easier to portray Queen Anne than the current English monarch: the role is a lot more fun. According to Deadline, Colman revealed at the Venice Film Festival in August that Queen Anne was "a joy [to play] because she sort of feels everything," adding, "She’s just a woman who is underconfident and doesn’t know if anyone genuinely loves her. She has too much power, too much time on her hands." And, she couldn't help but quip, "It was awfully fun having sex with Emma Stone."

Sadly, fans will have to buy the film online — or wait until The Favourite is available to stream on Netflix — in order to experience that fun for themselves.