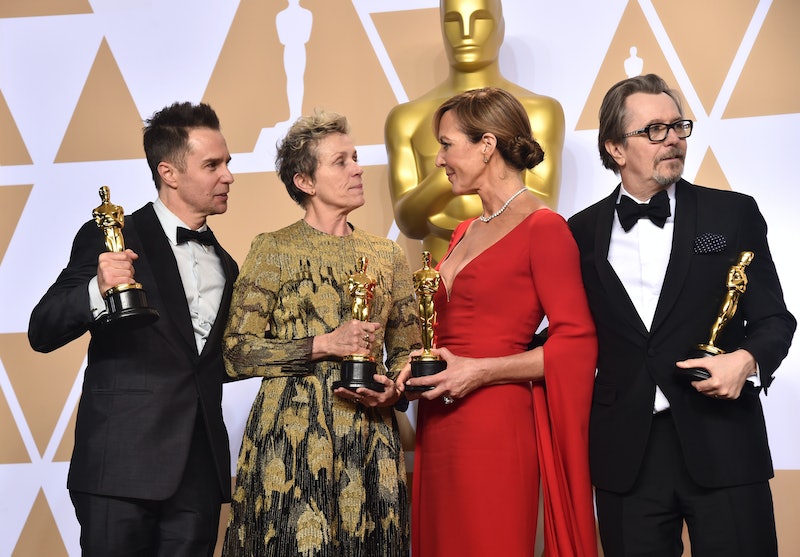 The 2019 Academy Awards have been plagued by repetitious cycle of bad decisions followed by a corrective backpedaling over the past few months. First, there was the ill-advised decision to create a new "Popular Film" Oscar, which would have presumably gone to the biggest box office winner of the year. The Academy has since delayed implementing the category after online backlash, with no solid word yet as to when or if it will ever happen. Then there came the saga of the hosting position, which found Kevin Hart stepping down after he was criticized for several homophobic tweets from his past and the Academy declined to replace him.

A series of other missteps followed. Deadline reported that the Academy had the bright idea to discontinue the tradition of having the previous year's acting winners present this year's prizes, which was reversed a few days later when the body announced that Gary Oldman, Frances McDormand, Allison Janney and Sam Rockwell would be handing out statuettes on Sunday. In late January, Variety reported that there would be performances of all five Best Song nominees, days after producers reportedly told three of them that they wouldn't be invited to take the Oscar stage. The outlet says that anonymous sources claimed that all the nominees stood together and asked for that call to be reversed. (Kendrick Lamar and SZA, nominated for a song from Black Panther, later declined due to scheduling reasons, also per Variety.) The announcement that four categories would be handed out during commercials also proved to be massively unpopular, and Deadline reported in mid-February that the Academy restored Cinematography, Editing, Make-Up and Hairstyling and Live Action Short to the telecast.

The 2019 Oscars will happen without a host, which may prove to be a welcome change. Here are some other things that need to happen to restore some of the good will the Academy has lost over the last couple of months.

In the history of the Oscars, only six black directors have been nominated for the highest directing honor: John Singleton for 1991's Boyz in the Hood, Lee Daniels for 2009's Precious, Steve McQueen for 12 Years a Slave, Barry Jenkins for Moonlight, Jordan Peele for Get Out, and now Spike Lee for BlackKklansman.

With a career spanning decades, Lee is in the same realm of Steven Spielberg and Martin Scorsese, who've made critically hailed films but waited years for that coveted win. And Lee is still waiting. Giving it to him this year wouldn't just be a win for diversity, it would also be an overdue recognition of the hard-working director's long-respected oeuvre. Now let's get some women of color into this category too.

Roma is a visually and emotionally beautiful film, and awarding Best Picture to a movie that debuted on Netflix would really stir up the Academy's old guard. Roma would be the first foreign language Best Picture winner ever, and the first to star an indigenous woman, Yalitza Aparicio, who is also nominated herself for Best Actress.

There is no other doc on the list that captures the essence of the year of #MeToo and #TimesUp as powerfully as RBG does (even though it takes place in the past), and Ruth Bader Ginsburg has been a hero to more than one generation. A win for RBG would also mean a win for female directors, since, as we know, no women were nominated for directing a feature.

Per The Los Angeles Times, Academy president John Bailey promised back in September that the body was committed to a three-hour runtime. But excitement can't be planned, and sticking to a schedule is where spontaneity goes to die. Imagine if, during the 2017 ceremony, there was a strict cut-off point and everyone went to bed thinking that La La Land actually won Best Picture. Let the ceremony go on as long as it needs to; the magic happens when it's unpredictable.

If ABC and the Academy really want to cut something to save time, they should take the advice of film director William Friedkin in this tweet. With all respect to the Academy president and the president of the MPAA, nothing new is ever really said during these bits, and they seriously slow down the show. Keeping the focus on the movies and the awards keeps up the momentum. And after that La La Land/Moonlight mixup, really, no one wants to hear from the accountants.

Ever since the #OscarsSoWhite movement led to Academy's new diversity initiative, there have been jokes at many awards ceremonies that poke fun at the issue. But these often land uncomfortably, and while the audience may be chuckling, the gags brush aside serious concerns about making sure that, going forward, awards voting bodies, and the stories Hollywood tells in general, aren't overwhelmingly white and male. (Also, these jokes have been made at ceremonies where the winners have been overwhelmingly white and male.) So please, Oscars, learn from the Emmys' mistake and don't poke fun at your own failures, and for goodness sake, don't make an entire opening number out of them. Just fix them.

7. Do Let This One Slide

The one exception I will make to the previous suggestion is to allow Natalie Portman to come on and slam the Academy for not nominating any women in the Best Directing category like she did to the HFPA at last year's Golden Globes. Because that was, and is, some epic nonsense.

8. No Cameos From Disgraced Trump Associates

Here's another area where the Oscars can learn from the Emmy's past mistakes. While an appearance from some disgraced former Trump administration member, like former Press Secretary Sean Spicer at the 2017 Emmy Awards, might sound like it would lead to a spontaneous and exciting moment, literally no one wants this. I know that there's an ever-growing list of resigned and fired people from which to choose, I know that Anthony Scaramucci was on Celebrity Big Brother, but no. Don't do this.

9. Award Best Adapted Screenplay To Can You Ever Forgive Me?

Back to the awards that would be exciting and really mean something, handing Nicole Holofcener an Oscar (along with her co-writer Jeff Whitty) a would be an all around thrilling win for women. Not only has Holofcener been in the biz for many years as a director (Enough Said), writer, and producer, but the film was directed by Marielle Heller (The Diary of a Teenage Girl) and stars ace comedic actor Melissa McCarthy in a fine dramatic turn.

10. Award Original Screenplay To The Favourite

Yorgos' Lanthimos' elaborate and wacky biopic about Britain's Queen Anne goes from a royal farce to a lesbian retelling of All About Eve with "one unexpected kiss," writes The Huffington Post's Matt Jacobs. Indeed, the film embraces its queerness with such a matter-of-factness that it's simply refreshing to watch. It's a weird film, for sure, held up by some amazing performances from Olivia Colman, Rachel Weisz, and Emma Stone, and The Favourite might win elsewhere, like in Costume Design or Production Design. But a win here would be an unapologetic acceptance of its unapologetic queerness.

I know what you're thinking: There's no way in hell this will actually happen. But wouldn't it be exciting if it did? Don't get me wrong, despite Boheminan Rhapsody's plethora of problems, Rami Malek truly does give a wonderful performance, and his win as a person of Egyptian descent would be meaningful. But Bradley Cooper seems to have put his heart and soul into A Star Is Born, even though his disappointment over not being nominated for Best Director smacked a little bit of white male expectation of praise. And who knows? Maybe Cooper would pull Lady Gaga up on stage with him to accompany him in his speech.

Hopefully, Sunday's Oscars will be fun, spontaneous, and filled with love for the movies. The Academy has learned that some of their recent decisions were unpopular and took efforts to fix them. So now it's up to the voting body to contribute some exciting moments. I'm not holding my breath, but hey, anything can happen!