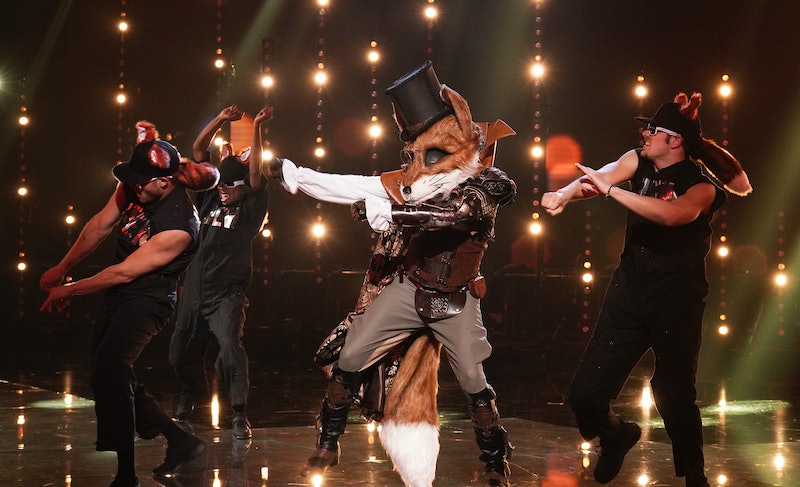 As soon as the clues package aired, sly fans quickly guessed that Wayne Brady is the Fox on The Masked Singer. The comedian and Broadway performer's undeniable vocal skills aside, one major giveaway from the character's intro clip on the Oct. 9 episode of Fox's celebrity reality singing competition came when he hinted, "from Doogie to Doubtfire, I've laughed with them all." A quick look at Brady's resume reveals that he's appeared on How I Met Your Mother as the brother of Neil Patrick Harris, who starred in early '90s series Doogie Howser, M.D. Later, the late Robin Williams (aka the title character in 1993's Mrs. Doubtfire) made a guest appearance alongside Brady on a 2000 episode of Whose Line Is It Anyway?.

Also in the clues package, Fox said he's "dabbled in many different genres," which is also true of the Let's Make a Deal host. Brady is a versatile performer, whose credits range from sketch comedy to scripted TV and, as previously mentioned, even Broadway, including roles in stage productions such as Hamilton, Chicago, and Kinky Boots. So Masked Singer panelist Jenny McCarthy may have hit the nail on the head when she noted that Fox has a "Broadway voice." (She even guessed he could be a Hamilton star.) This could also explain why Fox told the Masked Singer audience that he's definitely done his "best work at night." (Whose Line also aired in prime time.)

Fox added in his comic book-themed package that he feels like his "on-air superhero persona" clashes with who he really is. Although this clue led some viewers to believe Fox could be a Marvel alum, this, too, could apply to Brady. As Variety reported in October, Brady will recur on the CW's Black Lightning Season 3. He'll begin his arc on the show as villainous "super soldier" Tyson "Gravedigger" Sykes in early 2020, per the outlet. Given that the comedian is known for inspiring laughs, the bad guy role would certainly be unlike the real-life star.

Fox, who has thus far performed hits like Maroon 5's "This Love" and Bobby Brown's "Every Little Step," also opened his clue package reading a bedtime story to a young Fox, hinting the masked star could be a parent. Brady is a father to 16-year-old daughter Maile. The pair even appeared together on daytime soap opera The Bold and the Beautiful in 2018. Plus, McCarthy recently revealed to Bustle that the reason why many celebrities join The Masked Singer is "because they want to trick their kids."

Given that he's also previously guested on other Fox reality shows like So You Think You Can Dance and Gordon Ramsay's The F Word, all signs certainly point to Brady being the Fox. If he continues to perform as well as he has to date, viewers will have to wait until The Masked Singer's Dec. 18 finale to find out for sure.