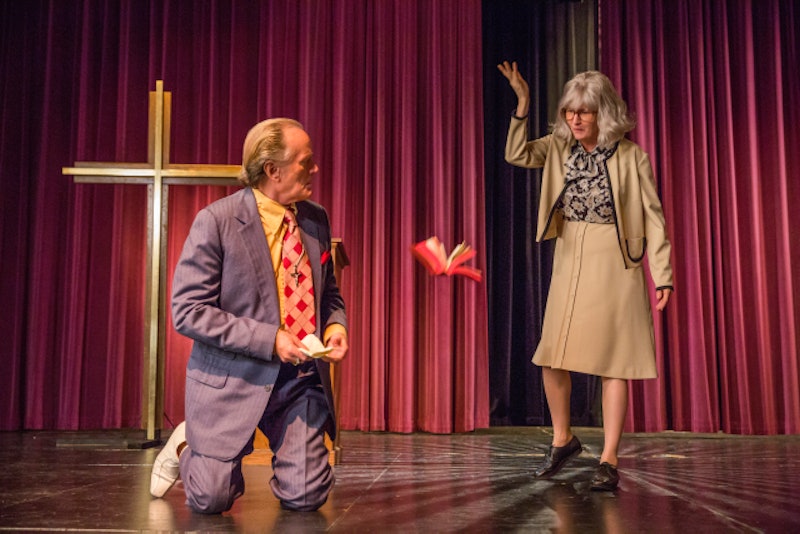 Netflix continues their barrage of original content with a new film this month, and it has a pretty provocative title. The Most Hated Woman in America stars Oscar-winner Melissa Leo as an atheist activist who fights against having the Bible taught in public schools, leading to the Supreme Court ruling that such teachings are in violation of the First Amendment — and later ends up kidnapped. It sounds like the plot of a wild movie, but is The Most Hated Woman in America a true story?

It is. Leo portrays Madalyn Murray O'Hair in the film, and she was indeed the woman who actually led the charge against religious indoctrination in public schools. One of the best-known advocates for atheism in the 20th Century, O'Hair founded the activist group American Atheists, but she is best known for the role she played in the landmark court case, Murray vs. Curlett. This case ended in a Supreme Court ruling in 1963 that outlawed Bible readings in public schools, a result that earned O'Hair the nickname "The Most Hated Woman in America," which was bestowed upon her in a 1964 Life magazine article. But the film doesn't focus so much on the court case as it does on the strange and tragic event that happened decades later.

On August 27, 1995, O'Hair disappeared along with her son, Jon Garth Murray, and granddaughter, Robin Murray O'Hair. There was a note left on the door of the offices of American Atheists from Jon, claiming that the trio had been called away on business. Jon then ordered half-a-million dollars in gold coins from a jeweler, which was considered highly unusual. He also called the offices several times over the next month, assuring workers there that he and his family were fine and were simply away on business. However, those who spoke with him grew suspicious, and an investigation soon began.

Eventually, the investigation into what happened to the O'Hairs turned to a potential murder investigation after Jon stopped calling his office and the trio never returned from their supposed business trip. The lead suspect was a man named David Waters, who worked for American Atheists, had admitted to stealing over $50,000 from the organization earlier in 1995, and who also had a violent criminal history, including a murder conviction from 1977 when he was a teenager. O'Hair exposed Waters' past to the other employees at American Atheists after he only received a sentence of probation for his $50,000 theft, and he allegedly sought revenge against her for it.

Waters, along with two accomplices named Danny Fry and Gary Karr, kidnapped the three O'Hairs. The investigation found that the trio forced Jon to withdraw the gold coins, and went on a spending spree with the money. Then, after about a month of holding them, the three men murdered the O'Hairs. Soon after the murders, Waters and Karr apparently turned on Fry and killed him as well, cutting off his head and hands and leaving his body — which couldn't be identified without his head and hands — by a riverbed. Both Waters and Karr were convicted and sentenced to prison on a number of charges related to the incident. The bodies of the O'Hairs, however, were not discovered until 2001, when Waters directed investigators to a ranch in rural Texas. All three family members were dug up and identified. Their bodies had all been dismembered, with their legs sawed off, and the head and hands of Fry were also discovered at the site.

The murder of the O'Hairs is remembered as one of the most tragic crimes of the 20th century, partly because of the alleged indifference of law enforcement to investigate what happened to the "most hated woman in America." This aspect of the story will also be explored in the hard-hitting new film, which arrives on Netflix on March 24.