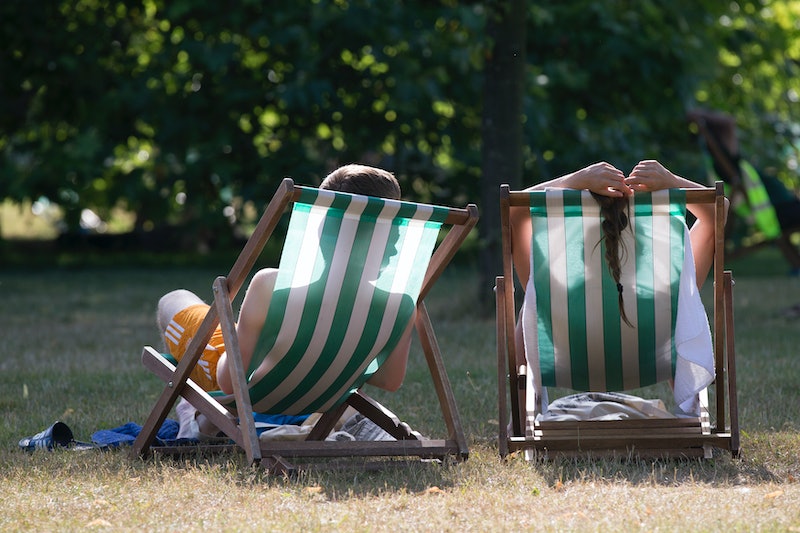 Oh my days where has summer gone? Compared to last year, 2019 has been a bit of a wash out. Instead of booty shorts it's been jumpers and umbrellas. Instead of feeling guilty about watching Love Island, it's kind of been a necessary activity to fill one's rainy evenings. Yes summer seemed to kick the bucket by the end of July. Which is super devastating for your average stay-cation-er. However, guys, worry thee not, because the UK might be due another heatwave, according to new reports.

I know right? This is some game-changing news. Imagine, a world where your summer wardrobe got the recognition it deserved? Where you could actually make use of all that suncream you bulk bought on offer in Boots?

Well, according to former BBC weatherman John Hammond, via the Mirror, we shouldn't be letting go of out on summery dreams just yet. As Hammond told the publication:

"If hot weather's your thing, don't give up. The weather will begin to settle down as high pressure builds from the south, opening the door to drier and warmer."

So, what's causing this welcome change? Well, it appears to be all down to a superstorm that is making its way from Asia to Europe, as expert meteorologist and Channel 4 weatherman Liam Dutton explained on his Twitter account. The superstorm from Asian is moving towards Europe super fast and seemingly it will mean an end to this soggy summer.

In the video, which Dutton posted along with the caption, "A look at how a typhoon over Asia may bring summer weather back to the UK in around 10 days", he said all hope is not lost.

Seemingly, tropical storm Krosa is spinning around the North West Pacific Ocean as we speak. Dutton's video explained that, although the storm began as a tropical typhoon, it has now weakened to a tropical storm. It is due to roll over Japan and then Russia. However, en route, it will give the jet stream a bit of a nudge, which is potential good news for sun worshippers round these parts. This is because, if the jet stream moves north of the UK, we will experience high pressure instead of low pressure. And high pressure will mean sunnier, more settled weather. In other words, you can sling your waterproofs back in the wardrobe (hopefully).

With all of this super unpredictable and strange weather we've been experiencing, it would be lovely to have a weekend where you can actually get outside and enjoy the sunshine. However, the fact of the matter is, this weather may not a great sign in terms of the ravages of climate change.

As Bustle has previously reported, the Met Office predicted in n their UK Climate Projections 2018 (UKCP18) that "by the end of the 21st century, all areas of the UK are projected to be warmer, more so in summer than in winter." They also stated that "hot summers are expected to become more common. In the recent past (1981- 2000) the chance of seeing a summer as hot as 2018 was low (<10%). The chance has already increased due to climate change and is now between 10-25%. With future warming, hot summers by mid-century could become even more common, near to 50%."