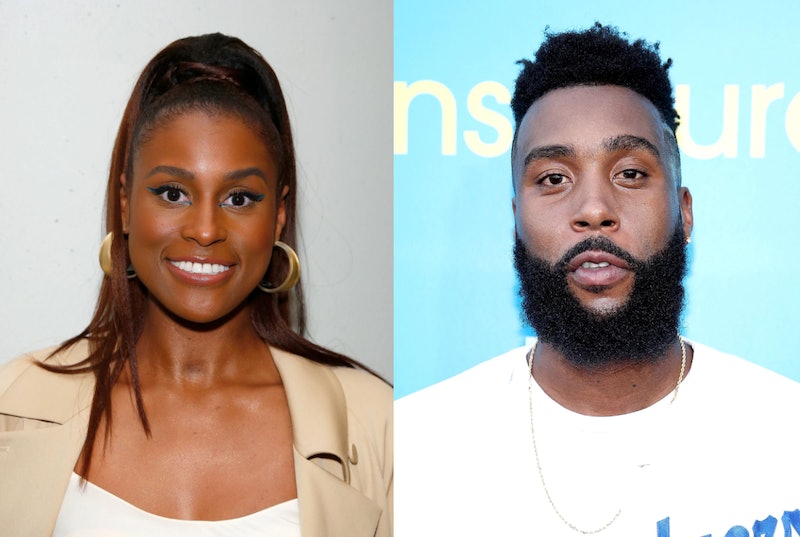 Even though fans have yet to hear the happy news straight from the source, this is pretty much the next best thing. After a few weeks of speculation, Lamine "Enimal" Diop, aka Issa Rae's brother, confirmed her engagement at the Los Angeles premiere of Little, according to Us Weekly. Diop didn't just corroborate that his sister is engaged, though — he dished out all kinds of details about Rae's new fiancé, Louis Diame, too.

After Rae appeared on the cover of Essence's April issue, fans began to wonder if the star was engaged. Why, you ask? Well, because it was pretty darn hard to miss the big ol' bling she was wearing on *that* finger. (At the time, Bustle reached out to Rae's rep, who had no comment on the engagement speculation.)

A few days later, two of Rae's Insecure costars — Yvonne Orji (who plays Molly) and Jay Ellis (Lawrence) — basically confirmed that Diame had, in fact, proposed. When asked about Rae's rumored engagement by Entertainment Tonight, Ellis explained, "We all found out in different ways because we're all on different text chains. We talk at different times, so we all found out at different times in different ways." Orji then added, "The reaction was all the same, like, 'You out here in these streets getting married, boo!?' That was the reaction."

Now, Rae has yet to confirm that wedding bells are in her future. However, based on all the info Diop gave Us Weekly, as well as both Ellis' and Orji's admissions, it's pretty tough to imagine that the rumors aren't true.

"He’s just a good guy, man. He’s just a cool guy," Rae's brother told the outlet about Diame on April 8. "They’ve been dating forever. He’s already been like a brother to me. Family ties at all the family events and dinners, Christmas, Thanksgiving."

As for when and how the actual proposal went down, "They did it around the holidays," Diop told Us Weekly. "[Rae's] so low-key too — for real! I found out, like, a couple days later, so we’re just gonna let her lead the way."

So, wait, Rae didn't immediately hop on the phone to tell everyone and their mother — and, assumedly, her mother — that she was engaged? And her own brother didn't find out until a few days after it happened? That *is* low-key. That's like, the definition of low-key. No wonder she has yet to confirm the news to the rest of the world.

Diop also admitted to Us that Rae and Diame probably wouldn't have an engagement party. Instead, "we’re just going to celebrate once it’s time for the ceremony," he said.

Totally understandable, especially considering how much Rae's got going on at the moment. Insecure was renewed for a fourth season back in September, her new movie Little comes out on Friday, and she's set to star in an upcoming rom-com called The Lovebirds alongside Kumail Nanjiani later this year.

In short, 2019 is shaping up to be a hella good year for Rae. Fans will have to wait to see if and when she decides to confirm her engagement to the public, but in the meantime, we can all thank Diop for dropping so much good info.

More like this
6 Expert-Approved Tips For Wedding Guest Makeup
By Olivia Rose Ferreiro
22 Gorgeous Wedding Manicures For Brides & Bridesmaids
By Olivia Rose Ferreiro
Kimberly J. Brown & Daniel Kountz Looked Back On Their ‘Halloweentown’ Romance
By Stephanie Topacio Long
Jesse Tyler Ferguson Had A Funny Run-In With A Fellow ‘Modern Family’ Alum
By Grace Wehniainen
Get Even More From Bustle — Sign Up For The Newsletter