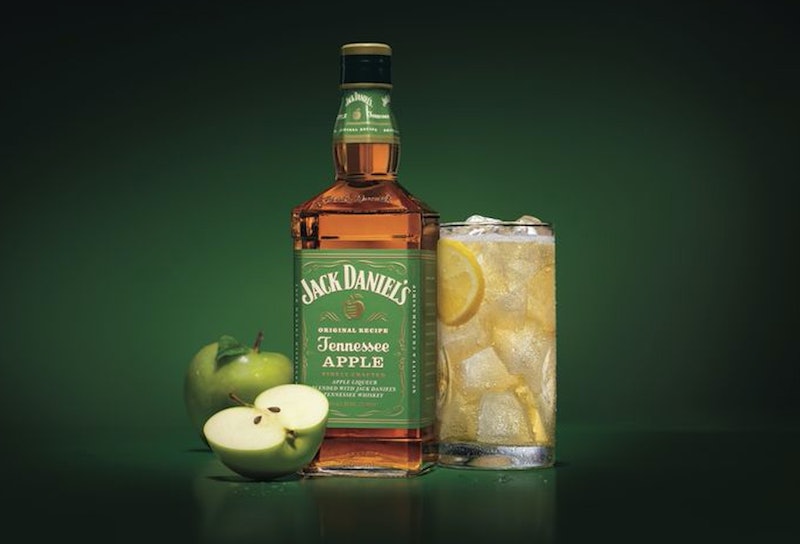 What is the most fall of all of the fall flavors? You may be reaching for pumpkin spice, you might even say that nothing tastes like fall as much as a pile of three-day-old Halloween candy. But I'm going to take your pumpkin spice and Halloween candy and raise you with Jack Daniel's Tennessee Apple Whiskey — a new apple-flavored whiskey that is basically the perfect fall drink for grownups. The tart, crisp taste of apple with the warmth of whiskey sounds perfect for fall evenings.

Apple and whiskey are natural bedfellows and a combination straight from flavor heaven — but this time of year, it's even better. It's 70 proof, so you're going to want to drink responsibly, because it looks like this cool drink can go down pretty easy. "Jack Daniel's Tennessee Apple has the unique character of Jack Daniel's Tennessee Whiskey coupled with crisp green apple for a fresh and rewarding taste," their website explains. "It's bold, refreshing, and exceptionally smooth."

They love it so much they even have created a recipe for it — Jack Denial's Tennessee Apple, lemon juice, and soda come together in the Jack Apple Fizz, which sounds like a fall drink to quench your thirst and help you feel like you're in a Tennessee Williams' play. The dream.

While normally fall flavors seem to revolve around what new spice we can put in our coffee or how you can get your favorite Halloween candy stuffed with your second favorite Halloween candy, it's nice to see that some alcoholic beverages are getting in on the action so you can make some spectacular drinks at your Halloween party (or just on a Thursday).

There have been sightings of pumpkin wine and glow-in-the-dark bottles of Bacardi. We've even had the announcement of Jagermeister Cold Brew Coffee, which is both an unholy union that should never exist and also definitely something you will want — life is complicated that way sometimes. If you want to feel really sophisticated, then Downton Abbey wines have even become a thing — so you can feel like a lord and lady overlooking your autumnal estate.

Of course, a lot of people are rocking Sober October this time of year — and that's OK, too. You can just load up on sugary lattes and Halloween candy and enjoy October hangover-free. But if you want something to look forward to, there are plenty of wine advent calendars to help you get ready for the holidays, which you can stock up on now and then look forward to all through fall.

With all of the fall flavors floating around, it always warms my New England heart to see apple getting a piece of the action — and it's easy to see why Jack Daniel's Tennessee Apple would be a natural winner. Just make sure to drink responsibly — you can eat the Halloween candy as irresponsibly as you want though. That's OK by me.