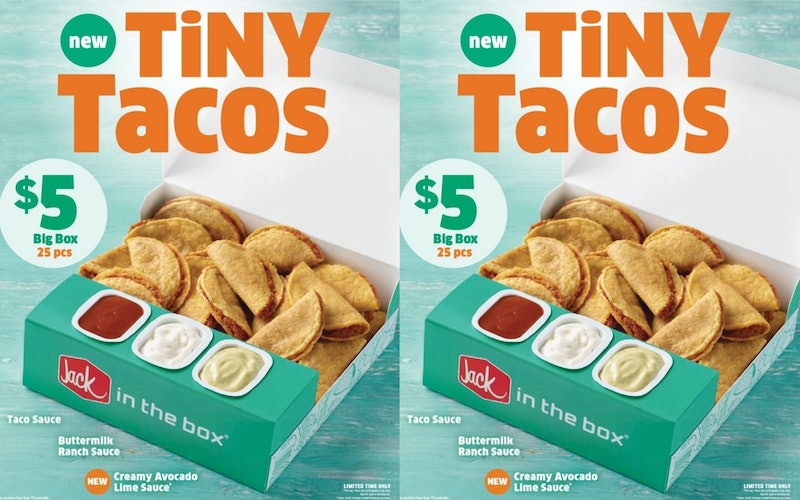 But soft, what light through yonder window breaks? It is the east and — no wait, it's TINY FREAKIN' TACOS. I can't believe that this is a real thing, but sometimes dreams do come true. New Jack in the Box tiny tacos have arrived and the internet is already freaking out about these teeny little envelopes of joy.

The good news? They are adorable and the same crunchy tacos you know and love from Jack in the Box — just very tiny. The bad news? Right now, they're only in test phases. So if you happen to live in Dallas or Austin, Texas or Fresno, California then you're in luck. They'll be testing these little bundles there until September 1, according to Chew Boom, and after that we can only hope that they start to appear country-wide. So people in test cities, please go and test the hell out these so the rest of us can benefit from their tiny, delicious goodness.

Now, interestingly, they'll be priced and sold a little differently depending on where you buy them — but either way, they look delicious. For customers in Texas, Chew Boom explains you can buy five Tiny Tacos for just A SINGLE DOLLAR. Or you can get a pack of 25 tacos for $5, complete with their Buttermilk Ranch dipping sauce, Taco Sauce, and their new Creamy Avocado Lime Sauce, which is debuting along with the tacos.

If you're in Fresno, you have an even more exciting option. There you can find 15 little taco friends for $3 — a great deal — or you can splurge for just an extra dollar try the Loaded Tiny Tacos. These are served with melty cheese, shredded lettuce and taco sauce and, well, you had me at melty cheese.

It's hard to say why miniature foods are better — but they just are, you can't argue with the science. When Hardee's announced they were testing a Froot Loop Mini Donut Milkshake I actually died at the tiny little mini donut on top. Dairy Queen's Blizzard Flight where you can try three mini Blizzards at once, without having to choose just one? I'm there. Maybe it's a fear of commitment, maybe I just love eating a lot of different things, but mini food is always a win.

And, of course, the fact that they are mini tacos doesn't hurt. Tacos are pretty much a perfect food that you can do anything with — just look at the Chicken Slider Tacos from KFC Japan. They are already hand-held, single serving perfection, so maybe making them mini was just a natural next step. It certainly makes more sense than the "tacro" — a taco-croissant mashup which, and I don't say this lightly, should have never been created and is a sin against everything.

We can only hope that these Tiny Tacos from Jack in the Box make an appearance nationwide after the trial is over on September 1 — and I'm looking at you, specifically, Loaded Tiny Tacos. We will no longer live under the tyranny of having to eat tacos in multiple bites. Those days are over. It's time for a better, tinier way.

More like this
I Tried The $20 TikTok Viral Oishii Strawberries — Here's What I Thought
By Sophie Hanson
Trust Me, Pickle Martinis Are The New It Drink Of The Season
By Emma Carey
Tacos Are Chef Kay Kay’s True Love Language
By Maxine Harrison
9 Funny Instagram Locations To Use On Your Next Post
By Siena Gagliano
Get Even More From Bustle — Sign Up For The Newsletter