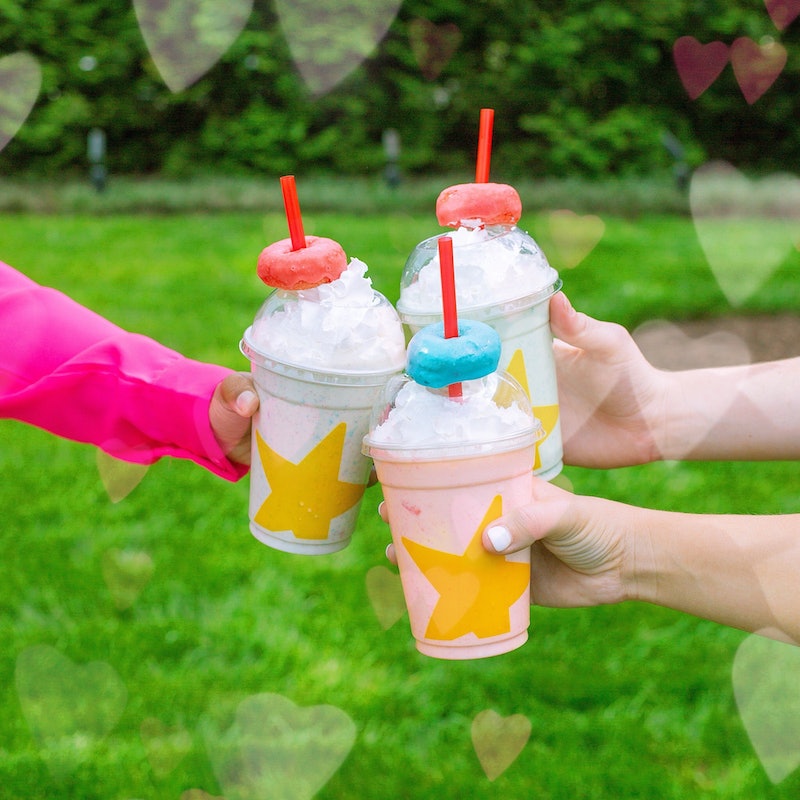 The gods of milkshakes and the gods of cereals — two of the undeniably best gods — have heard your prayers. If you wanted a summer mashup that feels too good to be true, Hardee's Froot Loops Mini Donut Milkshake are now a thing. Froot Loops. DONUTS. Milkshake. Those are a lot of glorious things in combination and I couldn't be happier.

Hardee's has announced that it is testing the Froot Loops Mini Donut Milkshake starting today, May 15, at participating locations and while supplies last — while Hardee's did not specify any specific regions for the test, you can call your local Hardee's in advance to see if it carries the new treat. Well, new-ish — you may be familiar with the super fan-favorite Froot Loops Mini Donuts from Hardee's that brought joy and deliciousness to the masses, but this is going one step further.

"The perfect summer treat features creamy, hand-scooped ice cream mixed with real milk, blended and garnished with Froot Loops Mini Donuts and whipped topping," the company explained in a press release. That's right, we're not just talking about some donut flavoring in a milkshake — there's a freaking donut sitting right on top, like a freaking crown. In all honesty, we may see this milkshake sitting on the Iron Throne come Sunday — just saying. Can you think of a better topping for your milkshake? I can't. Not only that, the colorful Froot Loop mini donuts make the whole thing look even more appetizing, if that was even possible for a milkshake. A hit of nostalgia, a hit of sugar — what else do you need to slide into summer?

Not only that, to celebrate the launch Froot Loops Mini Donut Milkshake, Hardee’s has announced that though it has a suggested retail price of $3.29 on its own, you can snag Froot Loops Mini Donuts for a buck with any purchase at participating locations for a limited time — so you can relive a fan-favorite and get ready for the milkshake variety. People loved these colorful mini donuts for a reason, so you may want to see what all the fuss is about — for a bargain.

If you're a milkshake lover, it has been a great time of year for you — with new milky, shaky offerings appearing day after day. Dairy Queen Blizzard Flights let you try three flavors at once — and they have a host of new flavors on offer, including a S'mores Blizzard chock-full of graham crackers, chocolate, and marshmallow. Not only that, McDonald's has some international menu items hitting participating locations next month – including the Stroopwafel McFlurry from the Netherlands, with waffle and caramel and ice cream blend together for an over-the-top treat. Do we deserve such a powerful thing? No, we don't — but McDonald's has given it to use anyway, so we might as well take advantage.

If milkshakes aren't your thing, because there's only so much goodness you can handle, don't worry — there's a lot of exciting stuff happening on the ice cream front. Go the classic route with the new Wendy's Frosty Cookie Sundae or just make your own at home delight with some of the new Unicorn Sparkle Ice Cream from Walmart, which is birthday cake flavored. There is truly an embarrassment of riches to behold.

Nothing says summer more than ice cream and whimsy, so it makes total sense that over-the-top milkshakes would get us all salivating. Sure, flavors and ice cream are crucial parts of a milkshake's success, but adding a mini donut on top? A Froot Loop mini donut? Now you're just showing off, Hardee's. Get your hands on one while supplies last.

More like this
On TikTok, Tinned Fish Date Night Is The Latest Viral Food Obsession
By Emma Carey
10 Pumpkin Recipes That Are Way More Creative Than Pie & Lattes
By Rebecca Deczynski and Alexis Morillo
20 Smart Devices Under $35 That’ll Change The Entire Vibe Of Your Home
By Emma Carey
This Tarot Card Means It's Time To Reach Your Magical Potential
By Brittany Beringer
Get Even More From Bustle — Sign Up For The Newsletter