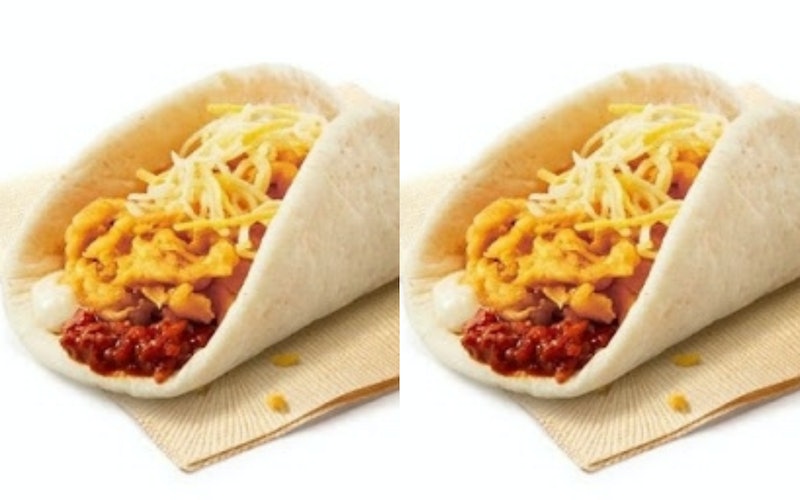 Sliders, tacos, fried chicken, Japan, and... gouda? It’s not your traditional combination, but it's happening and it looks kind of amazing. KFC Japan’s Chicken Slider Tacos have arrived. They are, well... they are what they are — a lot of things mashed into one. And if you're in Japan, you may want to try to get your hands on them.

The new menu item is featured right on the KFC Japan landing page and they look pretty incredible. If the Japanese language isn’t your strength, don’t worry — Brand Eating reports exactly what these “taco-like sliders” consist of. It’s got that soft tortilla shell that we know and love, then of course some taco meat and three kinds of cheese — you’ve got your gouda, your cheddar, and your mozzarella. Gouda tacos? I’m dubious, but I’m also curious. They also put the not very traditional special mayo sauce and a chicken tender on top — because it’s KFC, so it’s not going to go too far off brand. So a tortilla with mayo, fried chicken, taco meat, and gouda... all sold in Japan. We truly are living in a borderless time.

The tacos are retailing for 300 yen, which comes in at just under three all-American bucks. And, because it’s KFC you can also get the tacos as part of a combo meal — because, really, all things are better in combos. According to their website, the combo costs 500 yen (or just over $4.50) and includes a drink and some biscuit deliciousness, just to further confound your palate. Side note: The biscuits at KFC Japan look amazing and for some reason have a hole in the middle of them. Does this add some kind of donut element? I'm not sure, but I'm seriously considering buying a ticket abroad just to try one.

If you’re interested in seeing what other delicacies you can get a KFC Japan, there’s an English version of their menu available that looks pretty damn incredible. Pepper Mayo Twister Combos, Corn Pie (WHAT IS IT?!), and, of course, lots and lots of chicken options. It’s a whole new world, but with a lot of familiar faces.

There’s no denying that some of the most exciting and — um— innovative fast food items seem to come from around the globe, rather than right here at home. Let us never forget that KFC Singapore was home to the mac n’ cheese bun, a thing of such beauty and such divine inspiration that I don’t think I'll ever get over it. Of course, Japan was home to a fried chicken computer keyboard that showed up in 2014 — and Hong Kong got KFC-flavored nail polish, which is both an inspiration and an abomination. Perhaps the most divisive and potentially revolving KFC offering was the chicken-y bath bomb which also came from Japan. Seriously, the devil works hard but KFC looks harder... and at times is just as devilish.

A taco/chicken/slider/gouda combination isn't going to be to everyone's taste — but for some people, it might just scratch that itch. That niche, niche itch. So far, there are no signs of it coming to the US of A, so you may just need to try your luck on cheap flights to Japan if you want to try it — just make sure to check out some of the other international fast food wonders on offer while you're over there. A world of riches awaits you.