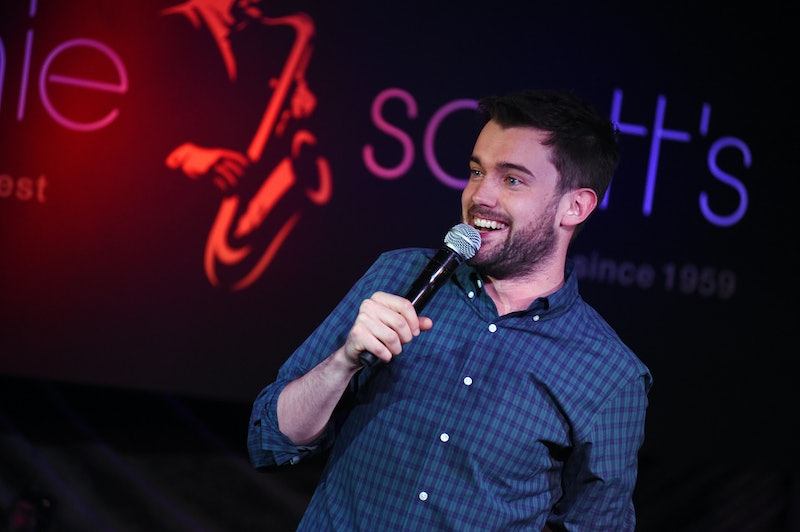 When it comes to the glitz and glamour of the annual National Television Awards, public transport probably isn't the first thing that springs to mind. However, on Tuesday night, comedian Jack Whitehall took the tube to the NTAs, shunning the more exclusive methods of transport favoured by his contemporaries. Whitehall arrived to the ceremony as a nominee for his Netflix comedy series, Jack Whitehall: Travels With My Father, and the 30 year old took the underground journey with co-star Michael Whitehall, who, you guessed it, also happens to be his father.

Whitehall shared a snap of his unlikely journey to his 1.6 million Instagram followers, with a typically sarcastic caption that read: "Someone loves public transport. #nta." (The star's father looks accutely unhappy about the underground journey.)

The Whitehall chaps were nominated in the Best Comedy category at this year's National Television Awards. According to Digital Spy, the duo's travel-comedy show was nominated alongside ITV's Benidorm, BBC sitcoms Mrs Brown's Boys and Peter Kay's Car Share, as well as U.S. comedy The Big Bang Theory. Sadly, the Whitehalls just missed out on the award — which is voted for by members of the public — after it was revealed that Car Share had emerged victorious in the category.

Jack Whitehall: Travels With My Father, which is aired on Netflix, follows the father-son pair as they embark on a six-week trip to Thailand, Cambodia, and Vietnam. According to the comedy site Chortle, the series intends to finish a gap year originally started by the Bad Education star back in 2009, and before filming of the series took place, Whitehall spoke to the site about what viewers can expect of his often less-than-enthused father. He said: "Who knows, it's Trump all over again. We're taking odds as to how long he lasts. I asked him which bit he's looking forward to the most and he said 'the plane touching down at Heathrow', so that doesn't necessarily bode well."

The British funnyman also discussed the professional dynamic that developed between himself and his father. He explained "I'm by no means the first comedian to work with their dad. Harry Enfield did it, Adam Buxton did it. If you're influenced by your parents and find them funny, why not? But I think this will have a very different feel to those shows. He's such a force of nature that I feel like I'm the supporting artist, he completely takes control."

After the show's successful debut back in 2017, Netflix went on to commission a second series, which, according to Popsugar, became available in September last year on the streaming service. Although the show is proving to be popular with Netflix viewers, and bagging itself the nomination at the prestigious National Television Awards, there is yet to be an announcement in regards to a third series. And if Whitehall's comments to Chortle about his father's distaste for all things travel are anything to go by, we might be waiting a little while longer before they hit the road once again. So in the meantime, all we can always hope. Fingers crossed.