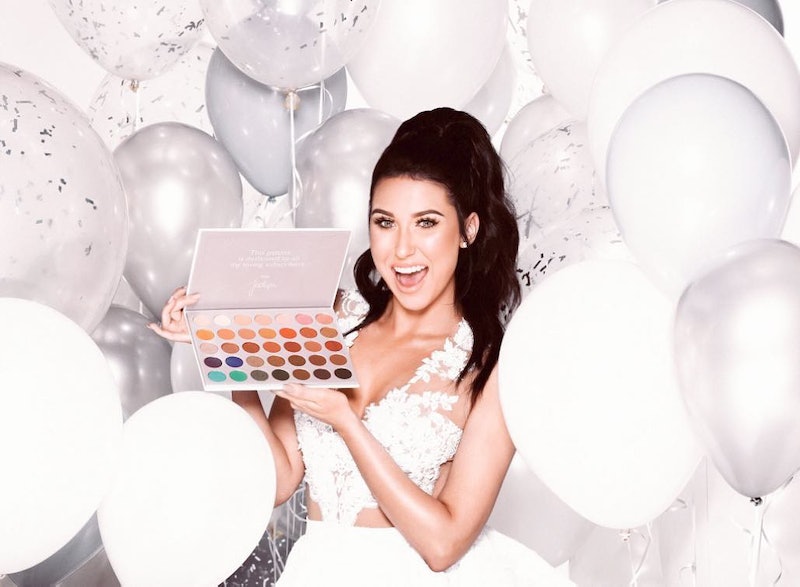 Fans of YouTube beauty gurus definitely know the name Jaclyn Hill, and they definitely know that the Jaclyn Hill x Morphe palette has officially launched. Unfortunately, though, according to Hill's Snapchat, it was sold out within 45 minutes. While a sell-out was expected, it hasn't stopped Twitter from having a lot of feelings about the launch and subsequent sell-out. From those who were able to snag one of the gorgeous palette to those who weren't, there are a lot of feelings on Twitter.

Hill's palette with Morphe made its internet debut at 8am PT on Wednesday and only 45 minutes later was sold out. Before the official launch, though, the hype surrounding the palette was on a whole new level than a typical Morphe launch. Not only were fans freaking out about the palette online, but Youtube beauty gurus were uploading video upon video about how incredible the palette is. Plus, on Tuesday, the evening before the launch, Hill, Morphe, and tons of beauty vloggers attended a launch party for the palette that looked insane.

With so much hype — and some seriously incredible looking swatches —, it makes sense that fans of Hill and Morphe would react strongly to the launch. As it turns out, they've got a lot to say.

For those who snagged the palette, it was a serious celebration.

If there is ever a time to do the Carlton, getting the palette is it.

Some fans were even lucky enough to get two of the palettes.

For those who didn't get the palette, though, the reactions were a little bit different.

So close yet so far.

In fact, a rage filled scream was in order for some.

Others just can't even.

Never fear, though. For those who weren't lucky enough to scoop up the Jaclyn Hill x Morphe palette, there will be a restock. While no date has been announced yet — and the wait will be painful —, you can still get your hands on the gorgeous collection of shades and support Hill like a true Hillster.