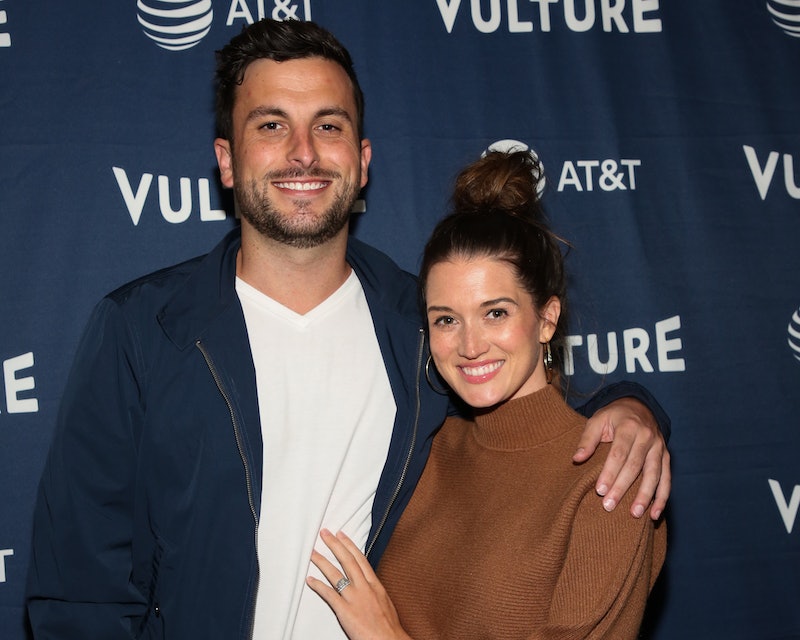 If any couple proves how successful Bachelor in Paradise can be, it's Jade Roper and Tanner Tolbert. Their relationship started in 2015, when they met on the summertime reality series and quickly became one of Bachelor Nation's strongest couples. Prior to finding love in Paradise, Jade had come in fourth on Chris Soules' Bachelor season and Tanner had been unlucky in love on Kaitlyn Bristowe's Bachelorette season. Then they found each other on BiP.

The duo pretty much hit it off right away, and they stayed out of all the other couples' drama — instead prioritizing getting to know each other. As a result, they weren't actually given all that much screen time. But while the cameras flocked to the messy pairs, Jade and Tanner solidified their love, which eventually led to Tanner getting down on one knee and proposing to Jade after just a handful of weeks in Paradise. It all worked out in the end, though, as the pair are now a happy family with children of their own. Here's how everything unfolded since they first met.

Getting Engaged In Mexico

At the conclusion of their season of Bachelor in Paradise, Tanner knew he wanted to be with Jade forever. "What we have is worth so much more than a million roses," he said when he proposed. "I love you Jade, and I want to keep on loving you for the rest of my life."

Years later, the couple revealed that they'd actually conceived in Paradise during their Fantasy Suite stay, but that Jade had a miscarriage after leaving. She said that the whole experience brought them closer together, which helps explain why their bond has lasted.

Less than a year after meeting, Tanner and Jade tied the knot in January 2016. Their ceremony, which featured performances by Jade's Bachelor bestie Carly Waddell and Seal, was filmed by the Bachelor cameras and aired on ABC as a Valentine's Day special. Chris Harrison officiated, of course.

Around the time they got married, they also broke ground on a home in Kansas City, Kansas, where Tanner is from. At the time, it was refreshing to see Bachelor stars not immediately moving to Los Angeles after the show, but the duo would eventually move to California.

Welcoming Emmy To The World

A year later, in August 2017, Jade and Tanner welcomed their first child together. They named her Emerson Avery Tolbert, but they call her Emmy for short.

After almost three years in Kansas City, Jade and Tanner took the Bachelor Nation influencer plunge and relocated to California in December 2018. Technically they live in San Juan Capistrano, which is about an hour's drive from Los Angeles.

Giving Birth In A Closet

Jade and Tanner's second child was born in July 2019 — in the closet of their new San Juan Capistrano home. As the story now famously goes, Jade thought she had plenty of time to get to the hospital when she went into labor, and then all of a sudden her baby was coming and she gave birth in her own closet. Everything went OK, though, and her son Brooks is doing just fine today.

Less than a year after Brooks' birth, Tanner and Jade announced in May 2020 that their third baby is on the way and due in November. Jade admitted on Instagram that it's a strange time to be pregnant amid the coronavirus pandemic, but added, "Although this time has its uncertainties, we are so thankful and excited for this baby. I truly believe babies being born during this time are here for a special reason, to be light workers." She continued, "We are beyond happy to love another baby, to give Emmy and Brooks another sibling and to have our children be so close!"

Not every Bachelor in Paradise love story turns out the way Jade and Tanner's did, but they're giving hope to every BiP duo out there. Sometimes life really does just work out.