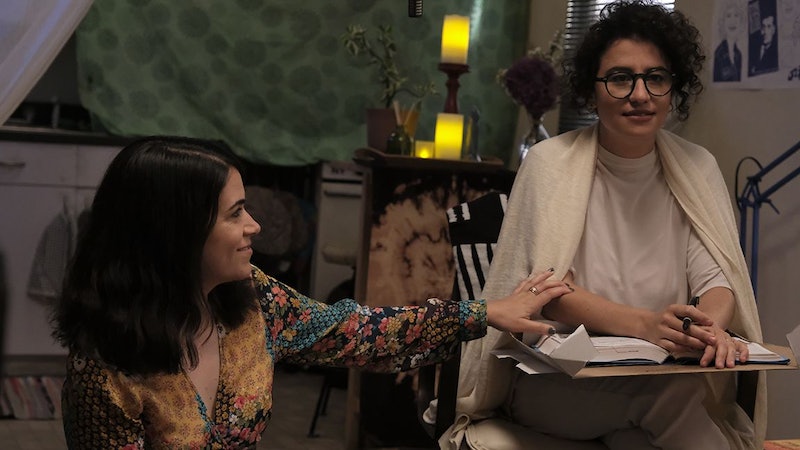 Spoilers ahead for Broad City Season 5, Episode 4. After years of living together, Ilana discovers a major secret about her roommate on Broad City's Feb. 14 episode: Jaime is a hoarder. This disorder has often been the subject of jokes or people's morbid curiosity (there is an entire A&E series dedicated to it), but Jaime's hoarding on Broad City is another example of how the show tackles mental health issues with both candor and sensitivity. The timing feels especially apt considering the internet's current fixation with cleaning up mess, thanks to Tidying Up with Marie Kondo, but "Make the Space" isn't about decluttering. Jaime has a mental illness, and Broad City, as it has done in the past, addresses this with the respect it deserves.

After smelling something so rank that she can't help but investigate it, Ilana breaks her promise to Jaime and enters his room, where she discovers that he is a compulsive hoarder. Her instinct is to clear out the mess with assistance from Abbi, but when they read about hoarding in Ilana's college psychology textbook (that Jaime had conveniently been holding on to), they learn that you should never remove the possessions of a person who suffers from hoarding without their consent. So even though what most people would perceive as junk is already at the curb, Abbi and Ilana put everything back — which just signifies that though they don't understand hoarding, they do understand the importance of treatment and don't want to do anything that would hurt Jaime.

Instead, Ilana shifts tactics and decides to hold an intervention/therapy session for Jaime that helps him recognize that his anxiety about his relationship has led to his hoarding getting worse. Sure, Ilana isn't a therapist and is her reliably inappropriate self, but her actions do lead to Jaime having a bit of a breakthrough. As Jaime's boyfriend Johnny (guest star Guillermo Díaz) points out, "No matter how wildly unprofessional you were, you made the space for Jaime to talk about his issues."

Ilana's direct discussions of mental health throughout the series have allowed people to talk about subjects that are often taboo. In "Make the Space," Abbi feels comfortable talking about how she went to therapy after her parents' divorce. In the Season 5 premiere, Abbi's college friend Cheese expressed feelings of inadequacy due to social media. And in Season 4, Ilana even addressed her own depression and seasonal affective disorder when she came to terms with increasing her antidepressant medication. Those are a few of the more direct examples, but Broad City has consistently provided a space for these types of mental health discussions to be had and accepted — even if they aren't always handled perfectly. (For instance, Ilana knows not to use the term as "crazy" because "it stigmatizes mental illness," but then says it anyway.)

Jaime and Johnny deserve a lot of the credit for working through the reasons behind Jaime's hoarding together. But Ilana dabbling in being a therapist for an hour leads her to consider a real profession in mental health, which is an ideal outlet for her accepting, empathic personality. And by being nonjudgmental and open, Broad City, too, has "made the space" for essential and relatable mental health dialogues — and it's a major reason why this show will be so missed once it's final season is complete.