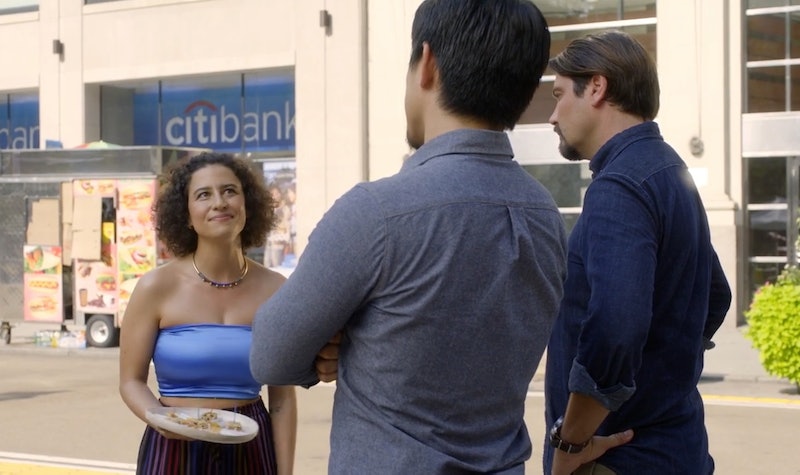 Spoilers ahead for Broad City Season 5, Episode 2. Even though Ilana is not what you would call "responsible," she has the makings of an entrepreneur. In Broad City's Jan. 31 episode, "SheWork and S**t Bucket," Ilana creates a start-up called SheWork, and while it's a pretty short-lived business, it's actually a pretty big step for her. The Long Island slacker has always been a hustler, and when she harnesses her powers for good, she can do amazing things. SheWork isn't necessarily a noble cause or even Ilana's passion, but it is a sign that Ilana could one day succeed in a career she cares about — perhaps even by the end of Broad City's final season.

Ilana is inspired to create SheWork after she mistakenly goes to YouWork for what she thinks is a job interview. She's at the wrong address (classic Ilana), but she's amazed that male entrepreneurs can create a multi-billion dollar corporation by just offering workspaces with a few perks. YouWork is clearly a spoof of the real-life WeWork, so Broad City is commenting on these types of start-ups that charge money for things that people could easily do for themselves. "All the great male entrepreneurs do it, OK? They take something that already exists, claim it was their idea, throw in some fancy furniture, and charge double for it!" Ilana tells Abbi. But what's more relevant to Ilana's growth as a person is that she uses this knowledge to make her own company with the help of her old temp agency boss Linda Lodi (Rachel Dratch).

SheWork is clearly absurd, but it's one of the first times that Ilana has shown initiative in a career setting. Her job at Deals Deals Deals was just a way for Ilana to make money — and to see how close she could get to making her long-suffering boss Todd (Chris Gethard) and coworker Nicole (Nicole Drespel) have complete mental breakdowns. So when Ilana was fired by Vanessa Williams' character in Season 3, which Nicole celebrated with a Sister Act 2 tribute, it truly was a long time coming.

Ilana then experienced brief success as a server at the RuPaul-run Sushi Mambeaux in Season 4, but again, that was something she was doing just for the money. She's also memorably had side gigs as a dog walker for Linda Lodi's temp agency, a nanny to Oliver (plus a house-sitter for his family), and a cleaner for an incredibly creepy Fred Armisen character who dressed as a baby. But "SheWork and S**t Bucket" has a different vibe than all those other ways that Ilana earned money — even though she does quickly abandon it after the YouWork guys give her $500 to stop. (Hey, it's not like the city would have let her continue to have this street office full of trash furniture anyway.)

Ilana will always be Ilana, so she's never going to be super reliable or organized or even conscientious. But "SheWork and Sh*t Bucket" shows that she can channel her creative energy, her outgoingness, her devotion to people/things she cares about, and inflated self-esteem to actually succeed in a career. Like Abbi says, she founded and sold a company in just one day. While that's quite the overstatement, there is some truth to it.

The juxtaposition of the women of Broad City is that Abbi tries and often fails (like with her apartment building revolution), while Ilana wings things and then things miraculously work out for her. So just imagine how successful she could be if the force of nature that is Ilana actually cared about a profession. And for Season 5, that just may be the case. In an interview with Bustle, Ilana Glazer mentioned that her character will start a career in mental health care. "I studied psych and child psych in college, I love therapy and the character loves mental health discussions," Glazer says. "We've created this space to live alternate lives throughout Broad City, and I would love to be a therapist and get to know people's juicy secrets, so I put that in the show."

So while Ilana flirts with becoming a "business bitch" (or rather a "business, bitch!") in "SheWork and S**t Bucket," she'll find a career that's better suited to her gregarious and compassionate personality in Season 5. And even though being an entrepreneur is vastly different from being a mental health care provider, her success in SheWork just might be the motivation she needs to make this major career move.