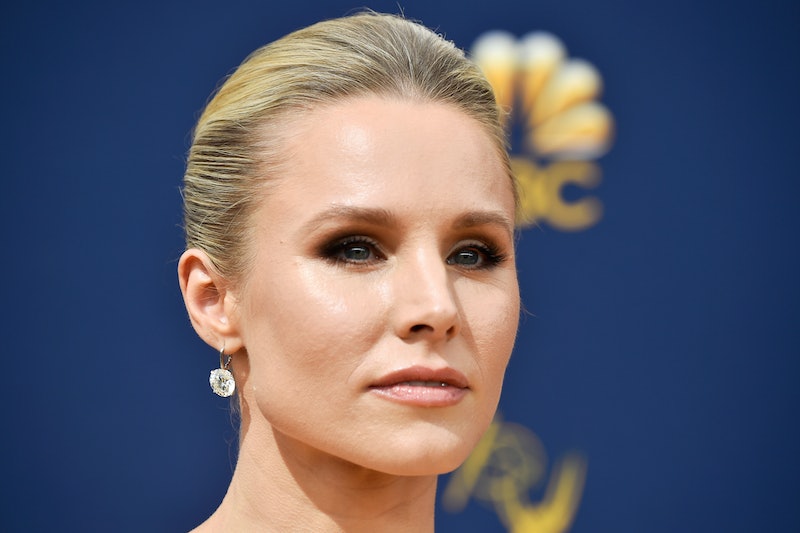 This week, there's a good chance that Kristen Bell made you cry thanks to her and husband Dax Shepard's appearance on Ellen. Now, Kristen Bell's 2019 Golden Globes dress probably made you cry once again. OK — so maybe it didn't make you cry. But there's a good chance it make your jaw drop, because this multi-talented actor looks gorgeous as she heads out to hit the red carpet.

Bell is heading to the Golden Globes on Sunday thanks to her nomination for The Good Place. Though she did not take home the award, the actor is one of the stars of the hit NBC sitcom, and there's a good chance that all your friends have been watching it nonstop on Netflix. Bell was nominated for Best Actress for her role as Eleanor Shellstrop. But this wasn't the only nomination for Bell. The series itself received a nomination for Best Television Series — Musical or Comedy. While it also did not win in its category, Bell still had a lot to celebrate at the awards show.

And thanks to an Instagram sneak peek, she certainly looked very ready to get the celebration started. Bell's 2019 Golden Globes dress was a gorgeous blush, nude gown that featured a plunging neckline, fitted waist, and flowing skirt. The dress certainly seemed to be Grecian goddess inspired, but fans of Bell's didn't know all the details about the dress right away.

According to her Instagram post, it seemed like Bell was still trying to pick out which shoes to wear a few hours before the red carpet started. Honestly, though, all of her footwear options look bomb.

While getting ready, Bell also shared a bit of a behind the scenes secret: She's not just wearing Spanx — the undergarment is actually being tacked to the gown itself.

And if you're curious why her hand was inside an ice bucket in her Instagram story, according to Bell, she's got the knuckles of a "12 year old Playstation addict" and was attempting to shrink her knuckles to fit an arm full of gorgeous jewels.

All that effort was well worth it — here's the final look.

And hey, she got those rings on! Sadly, we can't really see her shoes.

Of course, Bell is in good company tonight. She was nominated alongside some other amazing actors tonight like last year's winner The Marvelous Mrs. Maisel's Rachel Brosnahan, Alison Brie of Glow, Murphy Brown's Candice Bergen, and Will & Grace's Debra Messing. The five actors are a talented bunch.

While she went home empty-handed, tonight was still extra special for Bell, though. Not only was The Good Place nominated, but it was also the first Golden Globe nod for the actor.

And her portrayal of Eleanor Shellstrop hasn't gone unnoticed. In 2018, she was nominated for a Critics Choice Award for the role, and she was also a nominee for a Teen Choice Award that same year. Plus, back in 2017, she garnered a nomination from the Television Critics Association. Basically, it seems as though viewers and critics love Bell's worn on The Good Place.

While Bell may not have won tonight, in her gorgeous blush dress and jewels, she's basically still won gold for her red carpet look.