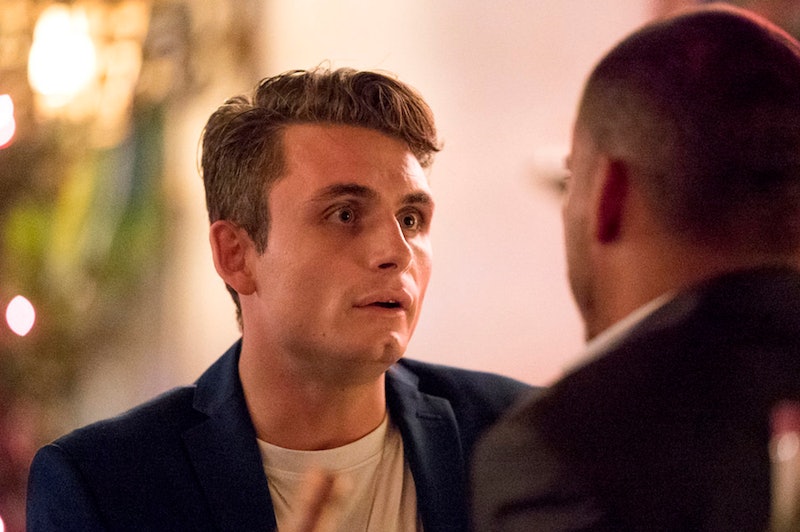 DJ James Kennedy's family has been a big part of Vanderpump Rules Season 7, and one of the reasons being a recent addition to SUR's roster. In the middle of the season, James Kennedy's brother Harry Georgiou landed a job at Lisa Vanderpump's bar. We've only just met Harry, but he seems like a respectful and even-keeled person.

Unfortunately, if you were hoping to learn more, an illuminating Instagram deep dive is not in the cards: Harry's IG account is locked. Also, he's only posted two times, so even if his account were public, it really would not be that deep of a dive. So let us get into what we know so far about the young SUR staffer. Harry is the middle child of Andros Georgiou and Jacqueline Georgiou; James and Harry also have a brother named Dylan Georgiou, who is the youngest of the three. Like James, Harry was one of George Michael’s godsons. Their father and the late pop icon were close friends and worked together for many years, but as James told The Sun, a falling-out torpedoed their relationship.

And while we're on the subject of messy relationships, Pump Rules Season 7 sure has shed a lot of light on James' complex family situation. As Pump Rules matriarch Lisa Vanderpump said on a recent episode of Watch What Happens Live with Andy Cohen,

"One thing I have to say is there is another side to James Kennedy, and we do see he's been incredibly supportive of his family financially. Now in all that he's done at SUR and with women, I stand against and that's why I let him go, and also because of his drinking. But he does have this incredibly soft, compassionate side, and he's really kind of stood up for his family."

As complicated as their family's dynamic is, James, Harry, and Dylan seem to be incredibly close. The DJ told Bravo's The Daily Dish in 2017,

"They're my best mates. We still hang out all the time. Harry is more the studious, smart kid. And Dylan's a bit of both. He plays soccer, a very good skateboarder. And I'm like the music kid. So we're all pretty creative and get along great. [They're] two pretty dope kids."

When Harry graduated from University of California San Diego in May 2018, James shared a photo he took with his brothers and their parents the day of the ceremony. "You did it mate, congratulations man what a day I'm so proud of you brother well done now let's take over the world haha @harry_georgiou," he wrote.

After college, Harry applied for a gig at SUR. Shortly after James was fired from the West Hollywood restaurant, he helped his brother Harry get his foot in the door. The middle Georgiou kid was offered a job bussing tables for two weeks, and once that period was up, management would go from there and decide if he had earned a more permanent spot.

So did the young SURver make it past those two weeks? Based on Season 7, he seems to have stuck around at least for a little bit, but it's possible the scenes of him have still been from his trial period. That being said, this is kind of the way James made it onto the show, too — he was a peripheral figure who'd pop up in the background every now and then, and gradually became a more central part of the cast. Perhaps the same will be true of Harry.