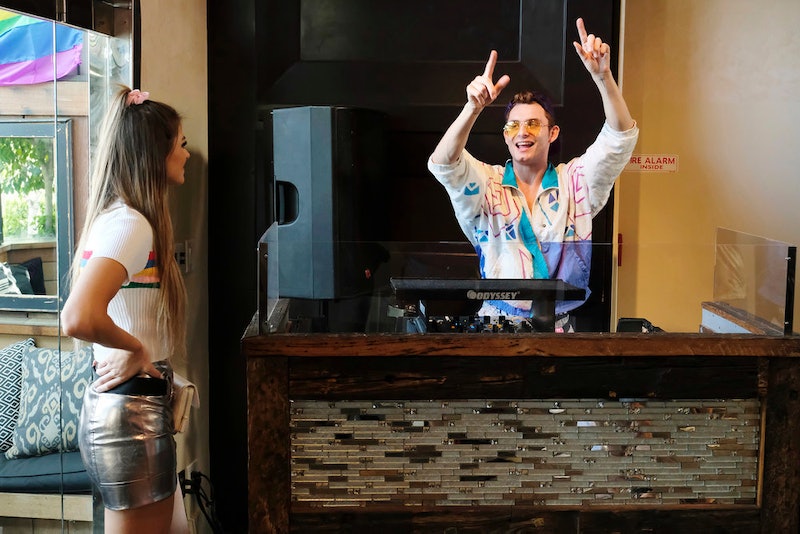 To say James Kennedy is a polarizing figure on Vanderpump Rules is an understatement, but as with any villain, there's a reason for how that villainy came to be. There's also always a softer side — one often born of pain — and for James, that gentle underbelly has to do with his family. James' parents are recently (as in the past few years) divorced, and, as it's been revealed in Season 7 of Vanderpump Rules, he's now financially supporting his family. It's a lot for a young twenty-something to handle, but it seems like James' relationship with his mom and brothers is his most redeeming quality yet.

That's not to say James is 100 percent a nice person. Or, honestly, even 40 percent. He's been accused of cheating on his girlfriend multiple times (which he's denied); he calls women fat (and that's on the nicer end of the insults he slings); he screams; and he becomes belligerently drunk and disorderly at work. But could James's abhorrent behavior stem, at least partially, from the fact that he's under so much stress from his family? From what's been said on the show, it seems like James and his brothers grew up well-off — his mother was a model and his dad managed the late singer George Michael for a time — but due to or additionally because of his parents' divorce, the family has fallen on hard times. James has expressed on numerous occasions in Vanderpump Rules that his mother is constantly asking him for money, and he's paying for his brother's schooling while his dad looks for a job. For all intents and purposes, he's the "man" of the family.

And that's a lot of pressure for basically a kid. James is barely an adult, and yet he's currently shouldering the burden of his entire family. It's clear that James would do anything for them, and it was sad and disappointing to watch his mother scream that he had taken his first steps at Tiffany's, because it's so clear she doesn't get why he's upset. It's not about the luxury or the privileges the family used to afford — it's about making do with what they have now. James is happy to provide his family with money to help them, he just wants to make sure they're not taking advantage of his generosity — and that he's not repeatedly dragged into the drama between his estranged parents.

James has handled it as maturely as he possibly can, and that's saying a lot for James. This also brings more clarity as to why he was so gutted to be fired from SUR — his family depends on that money in order to live. James behavior is still inexcusable, but now it all makes a little more sense. He's dealing with a lot of personal turmoil, and perhaps he looks to drinking as a means to cope — he just isn't able to do that without letting it get out of hand.

It's admirable, though not exonerable, that James has taken on so much for his family. But it shouldn't be his burden to bear, and his mother and father need to see that.