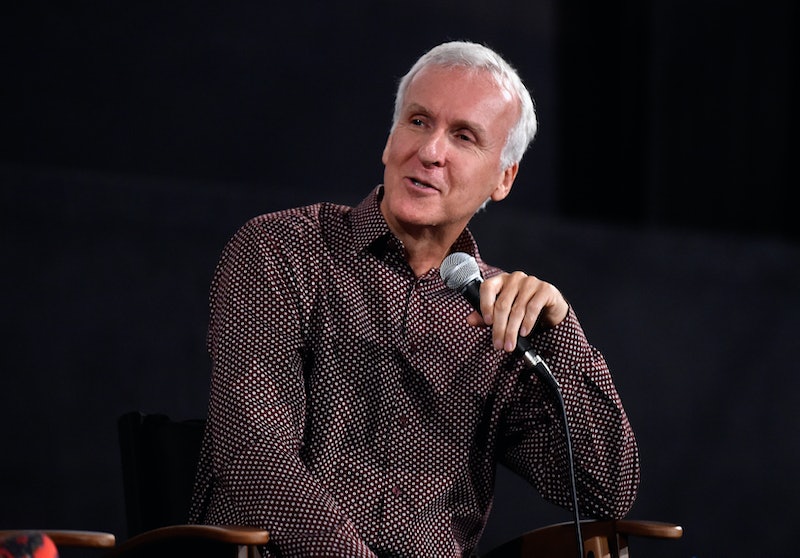 What makes a feminist a real feminist? Well, if asking filmmaker James Cameron, it's apparently a combination of strife, a lot of grit, and very little beauty — that's what. The Titanic director had a thing or two to say about 2017's smash-hit Wonder Woman, and it wasn't pretty. In a recent interview with The Guardian, Cameron called Wonder Woman is a "step backwards" for women, saying it's just a product of Hollywood's misogyny. Yes, Hollywood's misogyny, as if his very comments against beautiful feminists aren't the epitome of that term.

Cameron, who's also widely known for his epic work on Terminator, compared Gal Gadot's character Diana Prince to that of his beloved Sarah Connor. To the filmmaker, what made Connor a feminist were her flaws and pure badassery, not her looks. And in his words, the latter is what made Wonder Woman the massive theater hit that it is.

Just a fair warning: If you have a hard time listening to mansplaining, or are tired of men who make it their mission to teach women how to be "good feminists," this is where you should exit. While talking to the Guardian about his love for seeing strong women represented on film, Cameron said,

“All of the self-congratulatory back-patting Hollywood’s been doing over 'Wonder Woman' has been so misguided. She’s an objectified icon, and it’s just male Hollywood doing the same old thing!”

Forget the fact that film is worth celebrating because it tells a story of a woman defying the odds to safe the planet, or that it was helmed by a female director. Because according to Cameron, Gadot's attractiveness somehow cancels all of that out.

Oh, but it gets worse. According to the legendary filmmaker, the critically acclaimed box office hit was anything but a feminism classic. To Cameron, a character like Diana Prince is way too beautiful of a woman to truly be respected. Because, you know... One can't simply have a pretty face and still be a multi-faceted, butt-kicking role model with depth, too. He explained,

“I’m not saying I didn’t like the movie but, to me, it’s a step backwards. Sarah Connor was not a beauty icon. She was strong, she was troubled, she was a terrible mother, and she earned the respect of the audience through pure grit. And to me, [the benefit of characters like Sarah] is so obvious. I mean, half the audience is female!”

It's a no-brainer that Cameron couldn't have been more wrong in his comments. Telling someone that they're "too beautiful" to make a serious and well-respected impact on the industry is absurd. And if anything, Cameron is doing the very thing that he's being critical of Hollywood for doing — putting more stake into a woman's physical appearance instead of placing the focus on the depth of her character.

More like this
What Is Elvis Presley’s Net Worth? How The King Earned & Spent His Fortune
By Grace Wehniainen
Taylor Swift's “Carolina” Theme For 'Where The Crawdads Sing' Soundtrack Is Here
By Jake Viswanath
Ryan Gosling’s Ken Just Got The Seal Of Approval From His Partner Eva Mendes
By Rachel Mantock
Alicia Silverstone Has Recreated An Iconic 'Clueless' Scene
By Frances Stewart
Get Even More From Bustle — Sign Up For The Newsletter