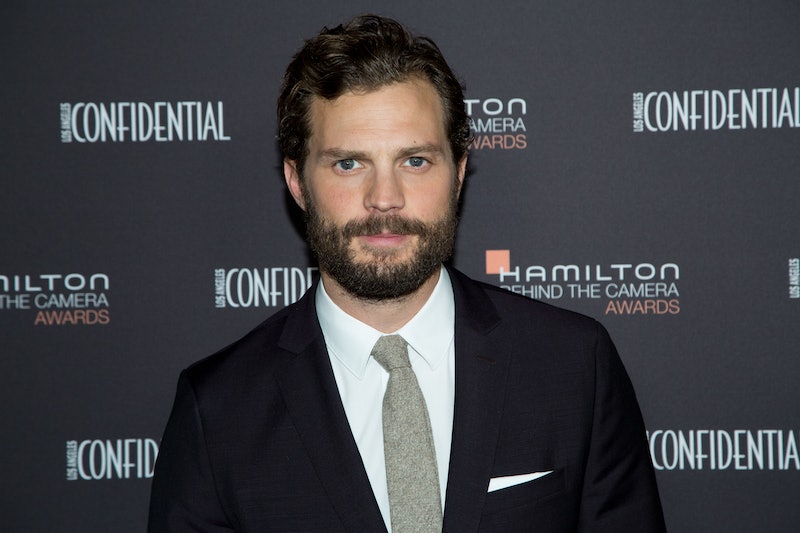 "Imagine" — it was the quarantine flop heard ‘round the internet. And now, a few weeks removed, participant Jamie Dornan revealed what Kristen Wiig texted him after Gal Gadot’s “Imagine” video went viral for all the wrong reasons. Dornan appeared on comedian Shane Todd’s podcast Tea With Me on April 7 and dished on everything, including how he got involved, and what happened after.

Dornan got involved in the star-studded affair after Wiig reached out. Since the two “got on brilliantly” on set of their upcoming film Barb and Star Go to Vista Del Mar, Dornan said he was happy to do it. “Kristen and I did a movie together last summer that’s meant to be coming out on July 31 but who knows what will happen,” Dornan explained. “I would do anything for her — that’s how highly I think of her.” He continued, “Kristen texted, ‘Gal and I are trying to organize this thing to lift spirits.’ So I was like, ‘Of course I’ll do it.’"

The video featured Natalie Portman, Will Ferrell, Zoë Kravitz, Jimmy Fallon, and more celebrities, which made the entire gesture come off as tone deaf while people were losing their jobs and getting sick. The internet was not amused: one Twitter user wrote, “I don't know how millionaires singing about ‘no possessions’ from their mansions is supposed to ease my anxiety,” and another tweeted, “Gal Gadot and the rich trying to be relatable. No one wants to hear it just donate and go.”

Dornan maintains the video was done with good intentions. He defended Gadot and said she was “trying to do a good thing.” He continued, “I just got dragged along with it.” He then added that he understood why the clip had been considered out of touch. “I literally did mine in the toilet of my house. Quite clearly, some people had escaped to their second home,” he said. “There’s too much acreage in the background… clearly in front of an ocean. I was quite aware of that whenever I was doing it to make it normal.”

The effort resulted in various spoofs. The Daily Show’s Trevor Noah shared a rendition from his balcony on March 19. “Imagine all the people,” Noah sings, before a voice out of frame screams, “Imagine you shut the f*ck up.” Musician John Mayer poked fun at the video on March 21 when he joked that he, too, had been enlisted for the video, but misunderstood the song choice to be Ariana Grande’s “Imagine.” He sang on Instagram, “Me with no makeup, you in the bathtub, bubbles and bubbly.” The video might not have sent the message Dornan and other celebs might have intended, but it certainly did entertain.