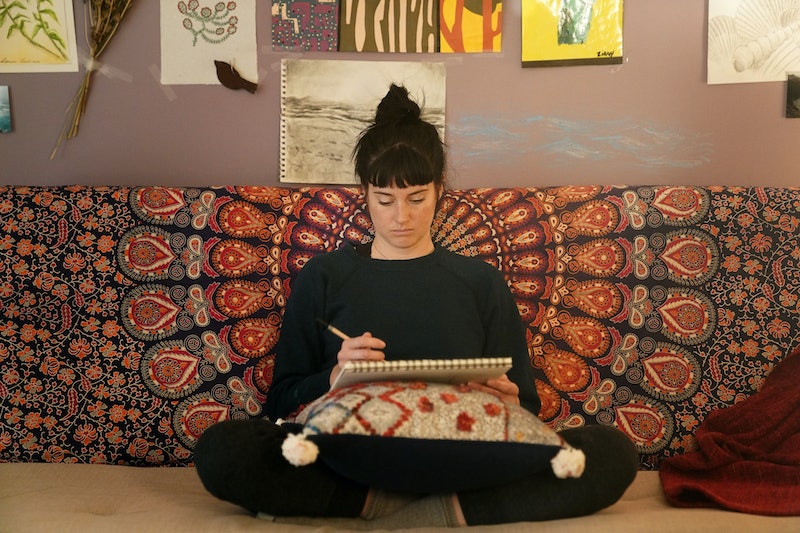 Each character that makes up the Monterey Five on Season 2 of Big Little Lies is in a new place following the death of Perry Wright (Alexander Skarsgård) in the Season 1 finale. But perhaps the person going through the most obvious transition is Shailene Woodley's character Jane Chapman. In addition to internal healing following her sexual assault at the hands of Perry eight years before his death, Jane has a physical change. Woodley opened up about Jane's Big Little Lies bangs in Season 2 — and why her fresh hairdo represents a new chapter for the young mother.

After Jane's edgy look was debuted in the first episode of Season 2, social media was abuzz. But, Woodley explained to The Hollywood Reporter that her character's latest hairstyle is indicative of something far more complex than a cosmetic choice. In addition to a new job at the Monterey Aquarium and love interest in coworker Corey (Douglas Smith), a look of her own signifies a real beginning.

"It is something that I think is missing in a lot of our storytelling on TV and in movies today — somebody's path toward reconciliation with themselves and reclaiming of themselves," Woodley shared with the outlet.

Jane identifying Perry as her rapist, and father of her son Ziggy, was a major moment — one that Woodley felt would be accompanied by other significant departures for her role. Changing up something physical to reflect an emotional change is a move the Golden Globe nominee said she could personally relate to.

"I've been in this position in my life where, after a major breakup, triumph or celebration or after a big change, a lot of people alter the way they look," she explained to THR. "I know for myself, it's always been haircuts and piercings. That's been my way of moving forward in new chapters of my life. I felt that for Jane, she's carried this weight of not feeling in her own body because of what happened to her for eight years. She felt disconnected from her own identity on not just an emotional and mental level, but on a physical level as well."

Woodley continued by adding that she felt Jane would've proclaimed herself a new person after the dramatic death of Perry, which would include a new wardrobe and hairstyle. She told the publication:

"At the end of season one when Perry died, I felt like maybe two or three weeks after that incident she would have woken up one morning, looked at herself in the mirror and thought, 'This isn't who I am anymore. This monster is gone and I'm not going to let him live in me or control me any longer.' In that moment, I feel like she took a pair of scissors and cut her bangs herself. . . I felt like that would have been her reclaiming her space, even if it was a subconscious decision, because this ghost who has been a part of her identity for so long had then left on the physical level."

After only three episodes of the season so far, there is still a lot to be uncovered about Jane's journey. Woodley even told THR that between multiple reshoots of the finale, she doesn't "actually know how it ends."

However, Jane's bangs may be a signal of progress for the second season, as Woodley said her storyline filled her "with a lot of warmth and a lot of hope for the world." Considering Jane's difficult past, that's an outcome worth watching for.