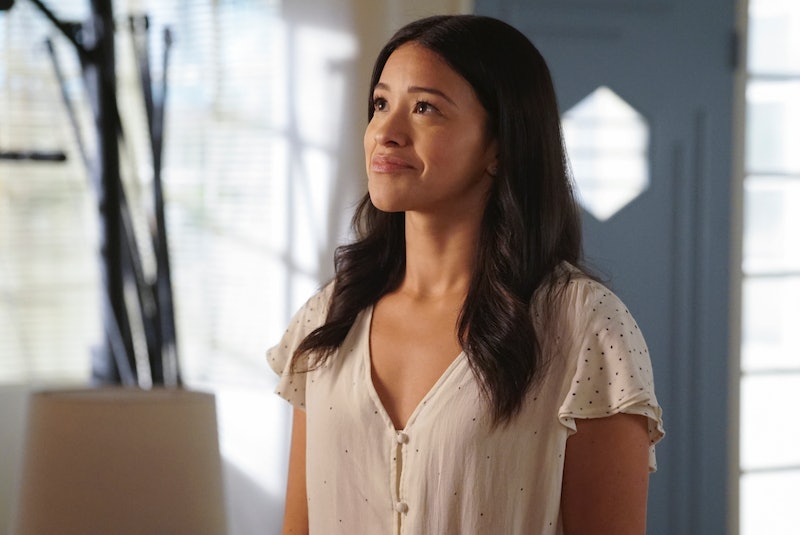 Spoilers for Jane the Virgin ahead. Over the course of her 30 years, Jane's home has pretty much always been at her abuela's house. She lived with Michael and with Rafael previously, but Jane moving out of Alba's house on Jane the Virgin to live on her own is a major step for her. Besides this decision showing an acceptance that she and Rafael are really broken up, it also shows that she doesn't need a romantic interest to make forward momentum in her life. Her story on Jane the Virgin has often focused on her love life, but Jane in "Chapter 92" is truly coming into her own for the final episodes.

Now that Alba has married Jorge, Jane struggles with this new "man of the house" dynamic that her abuela has created in "Chapter 92." Jane can't approve of Jorge's old-fashioned and at-times chauvinistic behavior, but she comes to realize it's not really her place to tell her grandmother how to live. And her buddy Petra helps Jane come to terms with the fact that it's time for her to establish her own home for herself and her son Mateo. As Petra says, "Why would the heroine live with her grandmother? She's a grown-ass woman. Can't she move out even if she doesn't get the guy?"

Despite currently mourning her breakup with J.R., Petra has always been massively independent. Jane, on the other hand, has been constantly surrounded by the comfort of an incredibly supportive family with home base being Alba's house. While Jane's home life is something Petra clearly craves at times, there's also a lot of merit to Petra's autonomy. And Jane sees that setting up her own place will help with her independence.

While the Villanuevas are a trio of self-sufficient women, it's interesting to see how their living situations have been defined by the presence or absence of men. Xo lived with her mother when became pregnant as a teenager, but then she continued to stay there long into her adulthood until she entered serious relationships with Rogelio and Bruce. That's exactly what Jane did with Michael and Rafael — until Alba herself ended up marrying Jorge (for real).

There is absolutely nothing wrong with living with your parents or grandparents especially when you consider the financial, physical, and emotional benefits to it. And the Villanueva's choice could also be cultural since the Pew Research Center reported that Hispanic households tend to include multigenerational family members more than in households of other ethnicities. But no matter what Jane's reasons for staying in her abuela's house were before, "Chapter 92" signifies a shift in Jane's way of thinking. While she was reluctant to move out on her own before because she was holding onto the hope that she and Rafael would get back together, she knows she needs to accept that they aren't together and she would be happier if she established her own space.

Since it's doubtful that Jane will end the series as a single woman (she's gotta get back together with Rafael, right?!), this move might not be as big of a deal as it seems. But Jane doesn't know that. And it's still meaningful in terms of her character advancement since she's breaking the pattern of needing a man to create a home. This decision is a significant shift toward Jane establishing herself as her own person. So while Jane has never had an issue with adulting, it still feels like we're watching our girl grow up before our very eyes in the final season.

More like this
'Schitt's Creek' Star Sarah Levy Named Her Baby Boy After Her Famous Father
By Jake Viswanath
Martin Hancock’s Wife Played A Key Part In His Return To 'Coronation Street'
By Catharina Cheung
Hayden Panettiere Admits "Addiction" To Alcohol & Opioids Before Going Sober
By Jake Viswanath
Everything To Know About The 'Pretty Little Liars' Reboot On HBO Max
By Mary Kate McGrath, Jack Irvin and Radhika Menon
Get Even More From Bustle — Sign Up For The Newsletter